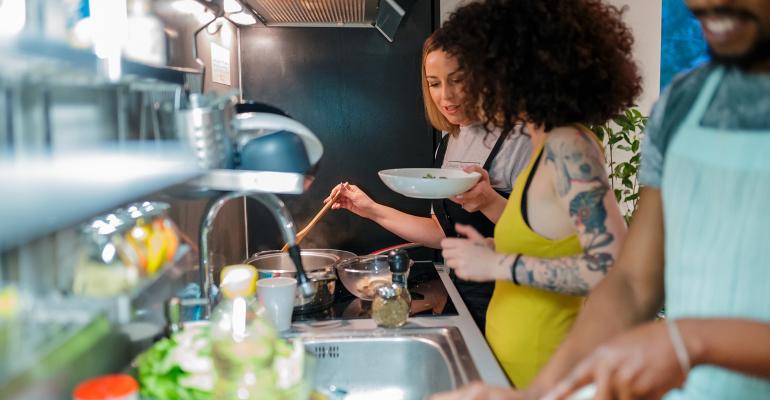 Co-Living Was Built Around Sharing Living Spaces with Strangers. Will It Survive Through a Pandemic?

Before the coronavirus hit, co-living projects were attracting more and more investor money. Now, as public officials continue to encourage social distancing, questions are rising about whether residents in co-living buildings can even follow these guidelines, as they share communal spaces and sometimes even bedrooms. NREI spoke with Gregg Christiansen, president of Ollie, a co-living operator, about the state of the co-living industry and how the sector has been responding to the pandemic.

This Q&A has been edited for style, length and clarity.

NREI: How has the coronavirus outbreak impacted the sector?

Gregg Christiansen: I think it’s a little too early to tell. What we saw so far in our assets at Ollie, where we focus on long-term leases and institutional quality buildings, we initially saw a pick-up in occupancy in the first few weeks. I think that was really due to the ease of moving into one of our co-living units. So, when all the universities shut down their student housing buildings, we saw an influx of people wanting to move into an Ollie property. So, that was a good thing, I think that was a positive.

I think there has been some criticism, or at least people thinking and starting a little bit too early of a debate, in my opinion, around densification and urbanization. There’s some debate starting to happen on whether urbanization is going to be a thing in the future and whether densification is going to be a bit more criticized than it has been in the past, given that COVID is a virus that transfers to people in close quarters. So, the question is if the government is going to demand spaces to be bigger where people live. If that’s the case, I think there’s going to be a lot of people pushed out of the cities, because the cost of those units is going to be much more expensive to build. So, I think there’s a little bit of a double-edged sword right now in some of the arguments.

What we’ve seen from a positive standpoint as well is our residents have actually appreciated being around roommates and not feeling like they are living in a studio or a one-bedroom apartment all by themselves. So, they actually have the ability to interact with their roommates. So, we view that as a positive from some feedback that we’ve seen. But there’s going to be a debate around apartment buildings and “are people going to be more inclined to live in the cities or not?” That’s a much broader discussion to have, so we’ll see what happens.

NREI: Do you think the outbreak might affect the co-living sector the same way it affected the co-working sector?

Gregg Christiansen: No, I think it’s going to be much more resilient. So, co-working [operators basically have] little one- and two-person glass wall rooms that break up a floor plate and stuff as many people into the smallest square footage as possible for the co-working operator to be able to justify the economics to themselves, and a lot of those leases are set on 30-, 60-, 90-day type of structures. Some of them are longer term, but for the most part, they’re pretty short-term leases, with a majority of tenants being small business or entrepreneur-type of individuals. So, in a COVID-19 world, where entrepreneurship is going to be put on pause, you’re going to see a lot of small businesses probably not make it. So, filtering back to the co-working space, the co-working space is going to be the first line to really get hit pretty hard. [It’s going to be] anybody really with short-term lease structures, so you take the hotel industry, the short-term stay industry, co-working industry, and they’ve been probably the hardest hit right out of the gate because of COVID-19. If everybody stops paying rent, people are going to try to get out of their office leases.

The thing about co-living is it’s where people live. It’s where you go home every night. It’s your place of being. It’s where your friends and family know you’re at. So, we’ve actually seen co-living be much more resilient than co-working because those are two very different industries. They get associated with each other a little bit because of the ‘co’ and the sharing economy concept, but when it comes to where someone lives, I think that they take it much more personally and it requires us as a co-living operator to really treat them with the dignity they deserve.

NREI: Has the technology co-living operations use been able to help solve the need for social distancing?

Gregg Christiansen: As we were building out our platform earlier, there were a couple things that we saw as a need to communicate and interact with our resident population, but also to make the ease of living much more accessible. We created an app, it’s called the Ollie Living app, and in that, we have the ability to send out notifications, residents can turn on or turn off services, they can ask for maintenance requests, pay the rent, they can sign up for our social calendar.

Immediately after COVID-19 hit, what we had to do as a team, and something I was very proud of with our team, was create a virtual social network where everybody is allowed to go on and sign up for events. Our Ollie social events would typically be in the building, or a local cooking class, or at a yoga studio, but we’ve transitioned our social calendar into more of a virtual social concept. We have cooking classes now online and we do yoga through Instagram. So, we try to still create the feeling of our social calendar, just through our technology that we’ve created. I think that’s actually been extremely beneficial to have that available for our residents, and we’ve actually seen a pretty good participation rate with our residents staying at home.

NREI: Any guidance you can provide on occupancy rates and move-in rates? Is there a concern around those metrics if the lockdown persists?

Gregg Christiansen: I don’t think we have enough data yet to be able to see if there is going to be a concern. We have four different existing assets that are open and operating, we have two more that are under construction, and so, what we’re seeing in New York is we’re still seeing people sign leases. We have the ability to do virtual tours. All of our applications are all on the internet. You can go on and sign a full lease just through the website and do a virtual tour and never have to ever touch a property. So, that’s great. What we have also been able to develop is a roommate-matching software platform that allows people to find other people to live with. So, even if they are not able to go to the property, they’re actually able to create and form a household on our roommate platform virtually.

Occupancy for us is really stuck at above 90 percent ever since COVID-19 hit. Our Pittsburgh asset had a tick-up of about five percent in occupancy once you saw the universities shut down. Then our property in Long Island City is close to 90 percent occupancy now. So, we’re actually seeing positive movement so far.

If [lockdowns] persists for two, three, four months longer, I think a lot of multifamily projects are going to start to see some weakening in occupancy. I don’t think co-living or even standard apartment buildings are going to be completely isolated from that impact, it would be something that we would all have to rally around. But people are already talking about opening the economy again a month from now and we’re starting to see states open back up, so knock on wood, hopefully we don’t get to the point where we’re in July and August and we’re still in this isolation situation. I think the benefit of our properties is that we have long-term leases, so for the most part we have seen occupancy stay above 90 percent since COVID-19 hit.

Gregg Christiansen: I think it’s a little too early to tell. I think what we’re going to have to get over is the perception that densification might be more criticized than before. I think people are going to want to see that play out a little bit. What we’ve seen in the real estate industry generally is everybody has put their pencils down for the time being from buying or developing or pushing forward new investment ideas across the spectrum. Whether that’s an office or industrial or multifamily [asset, and] retail especially, people have [pressed] pause to see what the world looks like in a post COVID-19 world. I think co-living is not an exception to that rule. It was a growing niche and people were starting to give it the right attention at the end of 2019, heading into 2020. We were starting to see our pipeline really pick up. So, we were pretty excited about where things were going.

But what we are actually probably going to see is some deals and some development projects either see some issues in financing or delays or certain management companies just not survive. Some portions of businesses will have some failed launches, or some failed start-ups, and I think co-living is not going to be immune to that either. So, we’re paying attention to that a bit.

Our investors are a bit longer term investors, they’ve been supporting us really since 2017. So, we’re pretty excited about where we’re going. Co-living is a niche and niche industries are generally the first to be put on the backburner when there is a recession. I think what co-living has going for it though is we are more flexible and have leaner kinds of platforms. So, we’re actually able to jump into buildings and help out much quicker than your standard co-type of industry.

NREI: Are there any other trends developing that you feel are worth keeping tabs on?

Chris Christiansen: I think a couple of things. I think you should be paying attention to delinquencies. That’s something that we’re really watching pretty closely. Just because we have long-term leases doesn’t mean necessarily that everyone is going to pay rent. I think the short-term stays sector is really something to focus on. What we’ve seen so far is our delinquency rates in our co-living units have actually stayed at or slightly above the conventional properties that we’re operating in. So, that’s great. But we’ll obviously have to monitor that pretty closely here soon. And then looking at how governments are going to respond to densification.