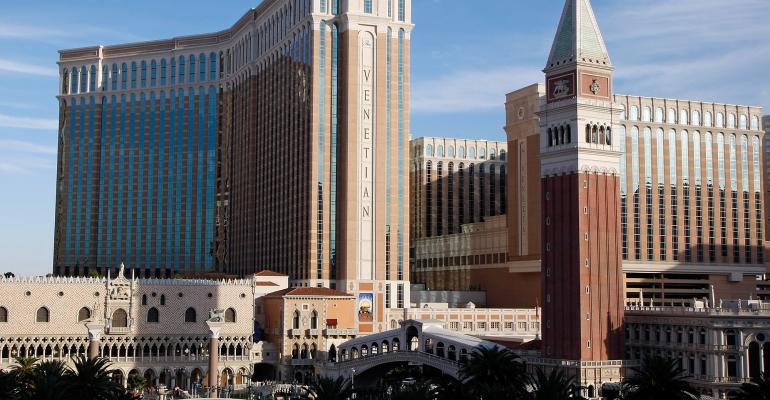 ‘We’re in a World of Hurt,’ Sands President Says of Las Vegas

(Bloomberg)—Las Vegas Sands Corp., the world’s largest casino company, is painting a bleak picture of the U.S. gambling capital for investors, saying Covid-19 has devastated the city’s bread-and-butter convention business, with no significant recovery in sight.

“We’re in a world of hurt here,” Sands President Rob Goldstein said Wednesday on a conference call, after the company reported a 97% drop in second-quarter revenue. Sands’ two properties in Vegas, the Venetian and Palazzo, reopened June 4 and generated just $36 million in business during the quarter.

Unlike the global gaming capital of Macau, Vegas is dependent on business and convention groups for much of its revenue. The coronavirus pandemic has put a halt to those, along with leisure travel. And Sands suggested they won’t be coming back quickly, even with progress against the disease.

“The slowest return of our business will be large-scale group business because it tends to skew younger, it’s more tech-driven and those people are more reluctant to travel,” Goldstein said.

Operators in Las Vegas can’t make money with negligible midweek hotel occupancy and half-filled properties on the weekends. Air traffic to the city is less than half of what it was, and the city is looking more like a drive-to, regional market, according to Goldstein.

“Las Vegas cannot perform without a return of these segments,” he said.

Shares of gambling companies tumbled Thursday in New York, with Sands down as much as 5.5% to $44.25 before recovering somewhat. Wynn Resorts Ltd., which began furloughing workers in Las Vegas, slumped as much as 3.1% to $73.74, while Caesars Entertainment Corp., the largest U.S. casino owner, declined 5.4% to $36.17. Caesars was taken over this week by much-smaller Eldorado Resorts Inc., which then adopted its target’s better-recognized name.

Wynn had previously continued to pay employees through a three-month pandemic shutdown, and its furloughs were another sign America’s gambling capital faces a long recovery.

“Although we retained all of our people while we were closed, we now know how challenged business volumes in Las Vegas are and are staffing to the significantly reduced demand,” Wynn said in a statement Wednesday.

The company, which reopened its two Las Vegas properties on June 4, declined to say how many employees will go on unpaid leave, but said it’s in the single digits as a percentage of total staff. As of Dec. 31, Wynn had approximately 30,200 employees, with about 13,800 in Macau and 16,400 in the U.S.

Goldstein said he expects Vegas to have the slowest recovery of Sands’ three markets, which include Macau and Singapore. In 2019, the company generated 63% of its revenue in Macau and 22% in Singapore. Wynn generated almost 70% of its business in Macau, with 25% coming from Nevada.

“Of all the places we operate,” Goldstein said, “Vegas is in the deep part of the pool.”

To contact the reporter on this story: Christopher Palmeri in Los Angeles at [email protected]