"COVID-19 remains front of mind for investors and occupiers, despite the recovery in global economic activity that began in April. Real estate activity remains subdued because workers have not yet returned to their offices in the big cities of America and certain parts of Europe. Investors need more freedom to travel and more certainty on economic growth.

Leading indicators suggest that the global recovery will gain momentum in H2 2020 and deliver strong rates of growth in 2021. The virus is relatively under control in Asia and most of the G7 economies (apart from the U.S.), so lockdown restrictions have been eased. Pent-up demand is high as evidenced by rebounding retail sales. And the level of economic stimulus supporting the global economy is bigger than anything seen since World War II. The expected pick-up in real estate demand will lag the improvement in economic growh by between six and nine months.

We have taken this moment when the economy and market are turning to review the outlook for global real estate. It is exciting, albeit not without challenges. The CBRE Research team that authored this report is always available to assist you. We look forward to working with you as you refine and execute your strategies."

North and South America have increasingly become the center of of the COVID-19 outbreak. In June, countries in the Americas accounted for more than 56 percent of all confirmed cases. Europe's share dropped to 11.6 percent.

China's economy is forecast for growth to slow to 2.3 percent. India's GDP will shrink by 5.8 percent.

For 2021, CBRE forecasts most large developed economies to experience growth rates north of 5 percent. The projections for the Euro area, the U.S. and Japan are growth rates of 6.4 percent, 5.0 percent and 3.0 percent.

Global real estate investment and lending volumes have slowed considerably already in the first half of the year and will be down overall year-over-year even with some picked up activity in the second half.

Due to the low amount of deal volume, there is limited data on how assets have been repriced in the current climate.

According to the report, "Distressed selling also has been limited. Many investors expect property values to drop significantly based on depressed rental income, but some sellers are taking assets off market rather than making significant price reductions. CBRE's preliminary forecast is for a 14 percent drop in capital value in 2020 and a 3.4 percent increase in 2021."

According to the report, "Compared to retail, the forecasts for yield expansion in the office, industrial and alternative asset sectors do not appear as strong. By mid-2021, an average primary market may see office yields rise by 50 to 75 basis points and industrial yields by less than 25 basis points. By then, economic recovery and rising liquidity will start to lower yields. Meanwhile, global bond yields likely will stay low for the foreseeable future, making real estate more appealing."

Foreign investment volume into U.S. properties fell by 54 percent in 2019. Cross-border capital accounted for a six-year low of 24 percent of global investment volume. According to CBRE, this was fueled in part by "the strong expectation of a fall in the U.S. dollar that increased hedging costs for global investors."

Overall, CBRE is expecting 50 million sq. ft. of negative net absorption in the second half of 2020 in the U.S. It will be the first decline in net absorption in more than a decade. In some European markets "take-up likely will decline by as much as 40 percent--a steeper single-year drop than any during the Global Finacial Crisis."

Average office rents in the U.S. are also expected to fall by more than 6 percent in 2020. This will be the first annual decline since 2010. The better performing markets in America will likely include cities such as Raleigh, N.C., Nashville, Tenn., Tampa, Fla., and Phoenix. Washington, D.C. will also hold up as well, thanks to the presence of the federal government as a stabilizing influence as an occupier.

Internationaly, rents in cities like London, Dublin and Stockholm will drop by between 3 percent and 5 percent this year, according to CBRE. Markets that could hold up better include Germany and the Netherlands. Rents in Asian Pacific markets could fall even further--between 5 percent and 10 percent.

According to the report, "Demand for office space in India remains relatively resilient as the country's outsourcing sector continues to evolve, attracting interest from global multinationals. India offers cost-effective real estate and high-skilled labor in sectors such as financial services, technology and software development."

10. The Rise of Flexible Working

There has been a lot of speculation about how COVID-19 will permanently change how corporations manage their real estate strategies. Surveys conducted by CBRE suggest that many corporations will move to a more flexible approach, allowing a blend of remote work and office work. "This does not suggest a full-time remote workforce, but rather one that will have more choice over where they work, creating a more hybrid workforce not bound by the barriers of a physical office to remain productive."

CBRE recently conducted a sruvey of retailers in the Asia Pacific region and found that 80 percent plan "to increase their use and investment in e-commerce and delivery apps."

Overall, the survey found that retailers are accelerating the embrace of digtial strategies to supplement their physical stores. "Adaptation to the digital world for many retailers was born out of necessity to increase sales, expand customer reach, provide on-demand delivery services and create brand awareness beyond using traditional flagship locations."

Growth in online sales has accelerated rapidly in recent months out of necessity, with many non-essential retailers forced to shut physical stores during the spring. Volume has recently stabilized, but the migration to online sales is not a trend that is expected to subside.

Firstly, e-commerce will increase its share of total retail sales, which will drive demand for distribution facilities. Secondly, retailers and manufacturers will increase their "safety inventory," which will fuel demand for warehouse space. Lastly, a "diversification of supply chains will occur either throughout Asia or through reshoring to North America and Europe."

14. Industrial Completions as a Percentage of Total Inventory
ewg3D/iStock/Getty Images

On the industrial development front, most of the 74 million sq. ft. slated for Asia Pacific will be delivered on schedule. This is a 12 percent increase in deliveries compared to 2019. In the U.S., construction came to a halt in the spring, but has picked back up again. The balance of supply and demand will mean that average vacancies will remain low for industrial properties.

Investment for multifamily properties was up 2.9 percent year-over-year during the first quarter at $39.8 billion. Sales volume did fall significantly in the second quarter, although activity did not stop completely.

High job losses and an elevated unemployment rate, however, will catch up to the multifamily sector. Effective rental rates in the U.S. fell 1.0 percent in the second quarter and CBRE projects from peak-to-trough that average rental rates will drop by 8.8 percent and the vacancy rate will increase by more than 3 percentage points. It expects the multifamily market to bottom out in the fourth quarter of 2020.

CBRE's forecast calls for ivnestment volume to fall overall in 2020, followed by a 2 percent increase in 2021 to €53 billion and then more significant growth in 2022 and beyond.

The explosion of international travel has been vital to the hotel sector in recent years. So the COVID-19 pandemic presents the hotel industry with a severe challenge.

In response to previous crises after 9/11 and the Global Financial Crisis, CBRE says it took "two and a half years on average for demand to recover in the U.S. and occupancy never dropped below 85 percent of pre-recession levels."

According to CBRE, "Many U.S. Southeast coastal markets have achieved occupancy levels of more than 70 percent on weekends between late May and early June. Leisure travel is expected to account for the bulk of hotel demand in Europe and the Americas this summer, and occupancies will remain very low compared with pre-recession expectations. The industry will not fully recover until corporate travel, group meetings and conventions and international travel resume in earnest, which many not happen until there is a vaccine or widely available treatment for COVID-19."

In Europe, open hotels in April and May showed an average 83 percent annual decline in hotel turnover. That caused a 131 percent decline in gross operating profit (GOP).

Over the past five years, investment in alternative real estate assets has averaged about $90 billion a year globally. According to recent CBRE surveys, 60 percent of respondents are actively pursuing one or more altrenative sectors. Data centers and healthcare facilities tend to top the list.

21. Capital Flows to Alternative Investments in the Americas
chandlerphoto/iStock/Getty Images

According to the report, "Alternatives account for approximately 12 percent of all commercial real estate investments in the Americas, with the U.S. being the most established and active market."

In the EMEA region, alternatives accounted for more than 16 percent of investment sales volume in 2019. Health care, student housing and seniors housing are the leading sectors in teh region.

Alternatives are relatively small part of the Asia Pacific investment sales market. The healthcare and data centers are growing in both Japan and China, according to CBRE.

Yields on alternative assets in the U.S. are generally attractive when compared with the industrial real estate sector.

According to the report, "Healthcare employment trends to grow at a faster pace in economic downturns, translating into more space absorption and greater rental income for owners. Of the two main healthcare property types, life sciences has a typical class-A yield of between 4.5 percent and 5.5 percent, while medical office yield is more stabilized at around 6.0 percent." 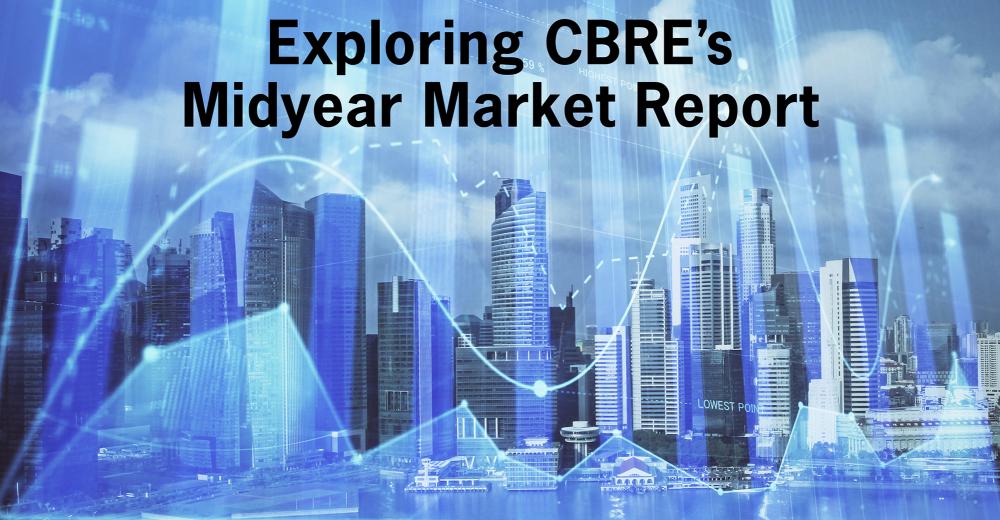 Next Up
Breaking Down CBRE’s 2020 Market Outlook
Start Slideshow ›