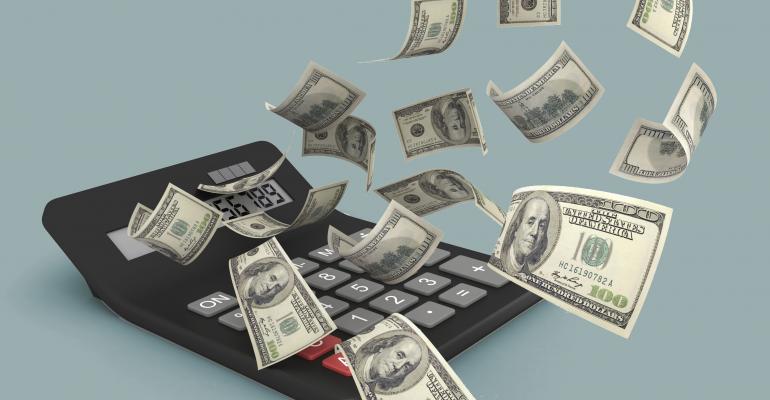 There is no question that the mountain of CMBS loan maturities hanging over the commercial real estate market has been shrinking. Yet there is still a heavy load of high-leverage loans searching for refinancing capital at a time when the CMBS market is battling its own liquidity crunch.

At the start of 2015, there was an estimated $300 billion in CMBS loans set to mature by the end of 2017. The fact that that volume has dropped by about two thirds, to $103 billion as of Oct. 1, is certainly good news. However, there is still a lot of work to be done, says Sean Barrie, a research analyst at Trepp LLC.

There were a lot of 10-year loans that were originated in 2007 at peak values—and very aggressive underwriting—that are now coming due. Added to that will be additional loans maturing in late 2016 and 2017 that had been previously extended by CMBS special servicers. “I think a big chunk of these loans that are maturing are going to face challenges,” says Jay Maddox, principal with the capital markets group in the West Los Angeles office of real estate services firm Avison Young.

Existing data shows that the market has made good progress in resolving legacy loans. Many loans have been successfully refinanced upon maturation, while some borrowers have defeased early in order to take advantage of the historically low interest rates. The concern is that much of the remaining load is comprised of deals that will be difficult to refinance. “It is kind of like when you go to the Last Call Neiman Marcus store. Everything good has been picked over,” says Maddox.

Some property sectors face bigger challenges than others, notably office and retail. Office properties account for the highest volume of outstanding maturities at about $33.4 billion, while retail is second at $30.9 billion. The office sector is also carrying the highest loan-to-volume ratios (LTVs) on that volume at 88 percent vs. 80 percent for the retail loans, according to Trepp.

“The higher overall LTVs for the office market can be a sticking point when a borrower looks for refinancing,” says Barrie. Some metros are continuing to struggle with high vacancies, and a handful of loans have had the appraisals for their backing collateral sharply lowered. The resulting spike in those LTVs has raised the average LTV for maturities in the office sector. “In other words, a few bad apples may be worsening the not-so-disastrous performance of a sector,” he adds.

The higher LTVs are an added hurdle for borrowers in a market where lenders are typically offering 70 to 75 percent leverage for even best-in-class, stabilized assets. “Borrowers are absolutely having a more challenging time refinancing even if their loan-to-value is within the realm of one they can get refinanced,” says Ann Hambly, founder and CEO of 1st Service Solutions Inc., an advisory firm for CMBS borrowers. Borrowers are looking for alternative sources of capital, as well as considering options that include selling the property, getting an extension on the loan or bringing in a joint venture partner to provide needed equity.

The situation is even more dire for borrowers holding legacy loans with extremely high leverage. According to Hambly, some industry estimates have put the volume of remaining CMBS loan maturities that will not be able to be refinanced in today’s market at close to 40 percent. A good portion of those loans, perhaps 25 to 30 percent, face challenges because leverage is very high at 90 to 100 percent or they are completely underwater at 150 or even 200 percent, she says. “In that case, capital is not the issue, it just needs to be written off,” she adds.

Compounding the problem further is turbulence in the CMBS market. The $49.9 billion in U.S. CMBS issuance during the first nine months of the year is down 36 percent compared to the same period in 2015, according to Commercial Mortgage Alert, an industry newsletter. CMBS issuance has been dragged down by volatility in capital markets, wide spreads and added uncertainty related to looming risk retention guidelines.

Ultimately, the remaining wall of maturities will cause some ripple effects in the broader commercial real estate market. Notably, it will likely spur more property sales, as well as result in an uptick in delinquencies and foreclosures in the near term. That could create some opportunistic buys for cash-rish investors. However, it is also likely that special servicers will continue to “kick the can down the road” a few more years, according to Hambly. “There is a lot of that going [on], and we are inevitably delaying the overleverage that exists in this market,” she says. 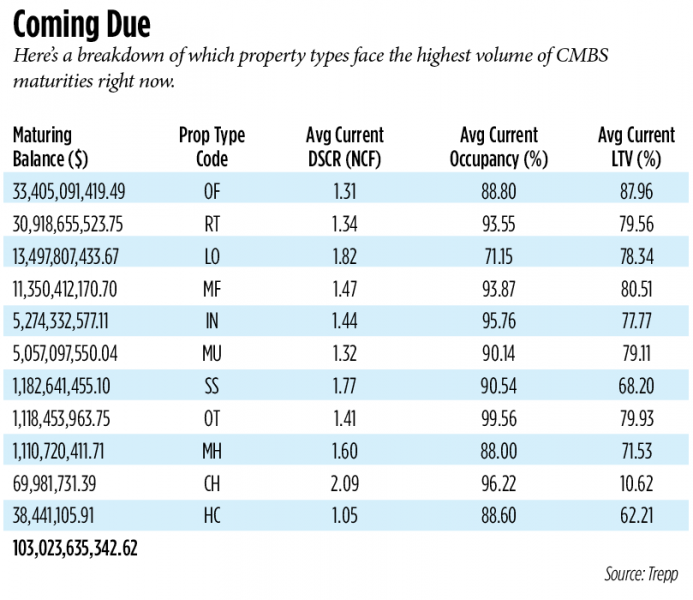