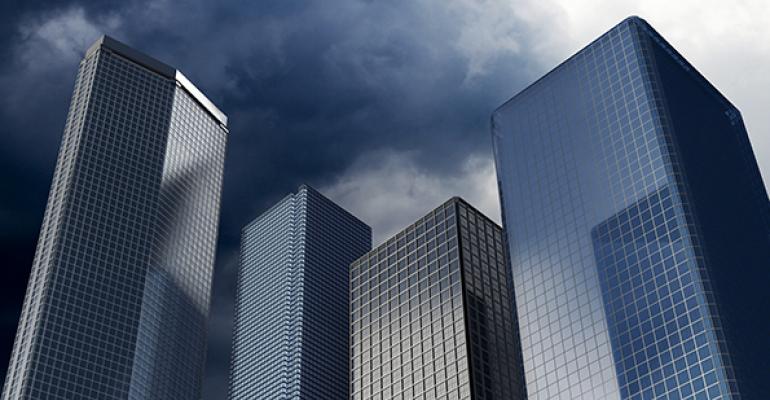 Projections for the coming year are even more dire, due in part to market volatility and the looming rollout of risk-retention rules that require CMBS issuers to hold on to 5 percent of every new deal or designate a B-piece buyer to assume that risk.

It’s been a rough couple of years for the CMBS market, and the ride is not over yet.

Market volatility, contraction and heightened regulation have made it difficult for originators to profit from their CMBS loans. This is forcing many to adopt creative methods to stay afloat. Others are scaling back, hoping to weather the storm.

Brace yourselves: The CMBS market is facing turbulent waters, and some issuers are likely to jump ship.

The risk retention rules taking effect toward the end of this year under the Dodd-Frank Act are likely to squeeze out shops that don’t have the capital to meet the 5 percent obligation for the five years required under the law.

Major CMBS issuers presumably have the edge in adjusting to these new regulations, which would require lenders to hold as much as $50 million in capital in a $1 billion transaction. But even those with the available funds to do so are being pressed by the need to keep their balance sheets in check.

As a result, some traditional lending institutions may consolidate in an attempt to stay afloat. Others may attempt to meet these rules by selling the risk of first loss to a designated third party, known as a B-piece buyer, in exchange for higher yields.

But yields have become problematic as profits in the industry have dipped. The 10 percent gains experienced in the 1990s have given way to meager yields of 2 percent today. This changes the game significantly as the industry struggles to redefine itself and satisfy investors in a complicated mix of shifting variables.

Undoubtedly, there will be CMBS issuers who decide to take a “wait and see” approach to these changes, holding off on issuing any more CMBS loans until the waters have calmed.

Some will find themselves pushed out of the market all together, unable to meet the escalating costs of doing business.

What Does this Mean for Jobs?

These market impacts are already affecting the job market, with many in the industry asking themselves, “Do I really want to be in this business?”

Credit Suisse announced this year that the company would be cutting $1.7 billion in costs and eliminating 6,000 jobs this year as part of an overhaul that runs through 2018. This announcement came on the heels of layoffs at other major banking institutions.

Unfortunately, we’re going to see a lot of qualified and very experienced real estate professionals out of a job, possibly even before the end of this year.

But the story isn’t all doom and gloom.

Market shifts tend to give rise to new innovation. In the case of CMBS, the contraction of traditional banking institutions has sparked substantial growth in the arenas of alternative and marketplace lending.

There will always be a need among commercial real estate owners to borrow money to keep their projects and new ventures moving.

Alternative lending is filling that void. It will undoubtedly help provide many of those laid off by the traditional lenders with new employment, too.

Gary Bechtel serves as president of Money360. Prior to joining the company, he was chief lending/originations officer of CU Business Partners, LLC, one of the nation’s largest credit union service organizations (CUSO).