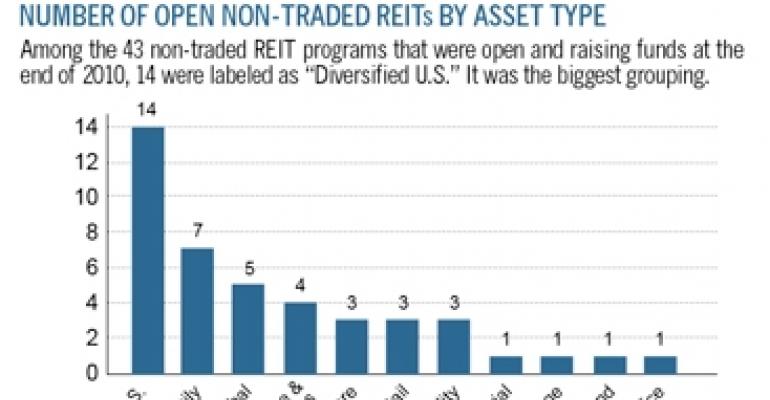 Michael Schwartz is keenly aware of the negative stereotype surrounding self-storage facilities. Many people have a preconceived notion that it is “a dirty, ugly asset class that has a big, burly gentleman with tattoos and a Rottweiler for security,” said the CEO of Strategic Storage Trust. “That might have been self-storage 20 or 30 years ago, but today self-storage has moved outside of the industrial locations and into the retail locations.”

The colorful comment from Schwartz came during a recent webinar moderated by NREI, titled “Emerging Niches in Non-Traded REITs: What Advisors Need to Know.” The hour-long program was designed to educate independent broker-dealers and registered representatives about the vital signs of the self-storage and health care real estate industries.

Webinar panelists included Schwartz of Strategic Storage Trust and Danny Prosky, president and COO of Grubb & Ellis Health Care REIT II. Both of these non-traded REITs are based in Orange County, Calif., and both seek to capitalize on shifting demographics, particularly the graying of America.

One in 10 U.S. households rents a self-storage unit, up from one in 17 households in 1995, according to the Self Storage Association. Strategic Storage Trust, whose portfolio includes approximately 41,000 self-storage units and 5.1 million rentable sq. ft. of storage space, expects the baby boomer generation will drive growth opportunities.

About 77 million persons were born in the U.S. from 1946 to 1964, according to the U.S. Census Bureau. Today, those boomers make up about one-quarter of the U.S. population.

“These baby boomers are heading toward retirement age and have accumulated valuable possessions over the years, many of which have sentimental family or historic value, such as pictures, letters and other family keepsakes,” according to Strategic Storage Trust's website. “As the baby boomers move into retirement age and begin to downsize their households, we believe there will be a great need for self-storage facilities to assist them in protecting and housing these possessions for prolonged periods of time.”

While favorable demographics are a demand driver, technology is revolutionizing the business, Schwartz told webinar attendees, and the best facility operators will be at the forefront of that change. “As little as five years ago, if you bought a self-storage property you would have to essentially go to the Yellow Pages and [buy] the largest two-page ad. That would drive your tenant base. Today, it's Google, it's the Internet, it's search engine optimization.”

“We're really trying to diversify what we call the payer mix,” emphasized Prosky. The health care REIT prefers that the rents generated by tenants in its buildings come from a wide range of sources. The primary sources of revenue for nursing homes are Medicare and Medicaid, whereas assisted living is primarily private pay. In between those revenue models are the medical offices, hospitals and surgery centers that generate revenues from varying sources that include government reimbursement, private pay and private insurance.

“What we want to do is position ourselves for the highest valuation upon liquidation when that time times. If you look at the publicly traded REIT market, you could see those REITs that trade at the highest multiple are those that are the most diversified,” said Prosky.

These two REITs specialize in completely different property sectors, yet each is responding to shifting demographics.