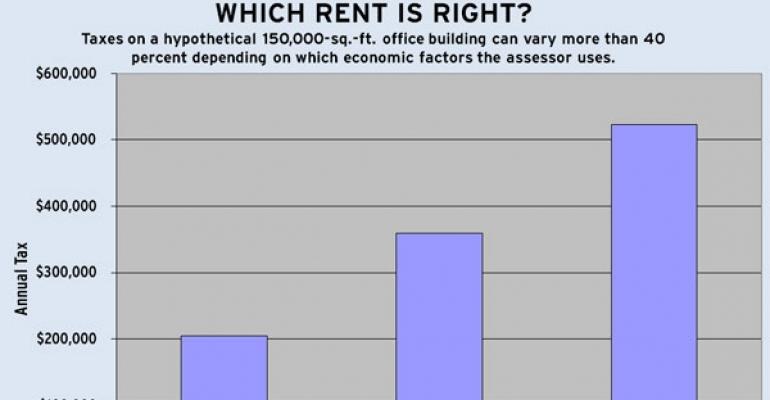 Recipes to Reduce Property Taxes Can Ease the Pain of Challenging Economic Times.

In his 1948 book, “How to Stop Worrying and Start Living,” Dale Carnegie titled one chapter, If You Have a Lemon, Make A Lemonade. That advice has been passed down through the years to anyone facing a tough situation.

How do you take something that’s bad and turn it into a positive? The metaphor is apt for commercial real estate owners today, many of whom are stuck with piles of lemons.

Rental rates and asset values have fallen to staggering lows, while snowballing vacancy has sapped income from commercial projects across property types and markets. And with local governments determined to maximize revenue from shrinking tax bases, it is more important than ever that property owners know the best recipes to minimize tax bills.

Imagine an intersection with four 150,000-sq.-ft. office buildings, one on each corner. The four buildings are physically identical, but have economic incongruities that could result in significantly different property taxation. These differences include vacancy rates, current rents, lengths of leases, creditworthiness of tenants and recent financing transactions.

If a tax assessor values the property using the actual contract rents, current occupancy and a capitalization rate obtained from a national survey, the property owner might well suffer excessive taxation. Arguing for a few adjustments to that calculation might substantially reduce Building A’s taxes.

The law of the jurisdiction might authorize a valuation that uses market rent, rather than above-market contract rents. Furthermore, leases that will be ending soon could justify a capitalization rate that is much higher than that reported in a national survey; rates from national surveys often are derived from fully leased, stabilized properties and not ones that soon could have significant vacancy.

If Building A’s value is assessed according to its superior attributes and taxed at 2.5 percent of market value, its taxes would be more than $520,000 (see chart). If, however, its valuation is similar to a building with market attributes, its taxes would be around $360,000, almost 30 percent less.

Building B has the market’s average vacancy rate of 80 percent and the same, above-market rents as Building A. The property recently sold in a sale-leaseback transaction that priced the building above its assessment.

As with Building A, the applicable law might provide for using market rents in the assessment. Additionally, the sale-leaseback transaction price doesn’t preclude a lower assessed value. Some state supreme courts have recognized that sale-leasebacks are simply financing transactions and should not be used to value properties for taxation.

Certainly any tax appeal for Building D would rely on the property’s below-market rents and occupancy. Additionally, the taxpayer may be able to show that these problems warrant a higher capitalization rate, which also would reduce the property’s indicated value and taxes.

To the extent that Building C, like Building D, has below-market rents, the same holds true. With the above-market occupancy, the owner of Building C will need to determine whether the jurisdiction would accept a valuation that uses market vacancy, and if not, seek an adjustment based on the greater likelihood of defaults.

Stewart Mandell is a partner in the law firm of Honigman Miller Schwartz and Cohn LLP, the Michigan member of American Property Tax Counsel (APTC).