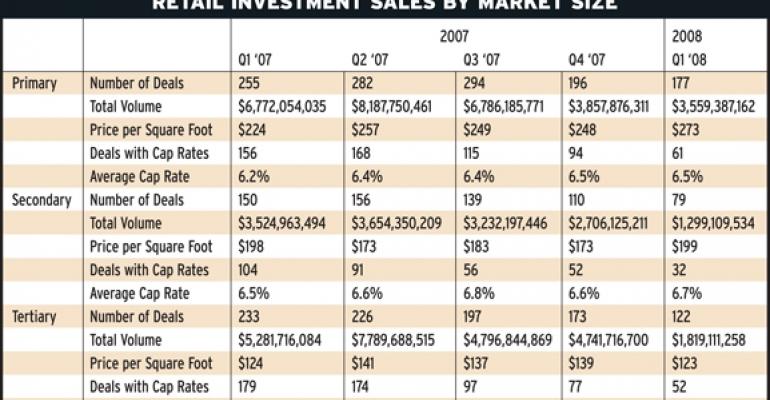 Phillips Edison was looking to maximize the returns on an existing $2 billion-plus portfolio of value-add retail properties, primarily in secondary and tertiary markets while continuing to grow its portfolio.

Develop and execute a business plan designed for each property adjusting it until that center has met the established goals. To that end, the company's 28 leasing agents and managers oversee an average of less than one million square feet.

Phillips Edison is raising $500 million in institutional equity for its fourth acquisition fund and is on pace to reach it by the end of this year.

It will be able to draw on its fourth acquisition fund to buy more than $1.4 billion worth of property over the next three years, or about 150 to 200 retail centers.

At the intersection of Cornwell Drive and Maple Avenue in the southern New Jersey town of Bridgeton, you'll spot a neighborhood shopping center that's about two-thirds empty. A local music store, Percussion One, anchors the 110,728-square-foot shopping center about 40 miles south of Philadelphia. If the nearly 70 percent vacancy rate at Upper Deerfield Plaza and the lack of a big-name anchor tenant weren't worrisome enough, much of the deteriorating roof needs to be replaced.

That's not what Cincinnati-based Phillips Edison & Co. saw when it bought the property in January from a private partnership for $6.5 million. Instead, it has high hopes. Phillips Edison expects to resuscitate the center in less than three years, leveraging, among other things, the 100 percent occupancy rate at two grocery-anchored retail centers located within a half-mile radius of Upper Deerfield Plaza. In other words, retailers wanting to access the market have no choice but to consider the plaza.

John Bessey, vice president of acquisitions at Phillips Edison, says the Bridgeton market isn't “over-retailed” yet, and demand is actually growing. The number of residents in the Vineland-Millville-Bridgeton metropolitan area hit nearly 155,000 in 2006 — that's up almost 6 percent from 2000.

Bridgeton, located in Cumberland County, has the lowest median annual household income of any county in New Jersey at $47,443. And, Cumberland County's retail sales per capita of $10,259 in 2002 was well below the state average, according to the U.S. Census Bureau.

But there's more there than the numbers indicate, Bessey insists. “For the untrained eye, somebody would see a lot of risk,” Bessey says of Upper Deerfield Plaza, the company's first acquisition in New Jersey. “But because this is what we do day in and day out, we understand the capabilities of our organization to deliver the plan.”

Bessey estimates the internal rate of return for Upper Deerfield Plaza will be in the low 20 percent range, compared to the 13 percent to 15 percent minimum that is common for Phillips Edison properties. In fact, Phillips Edison already seems to be succeeding, having by mid-June landed two key tenants — a grocery store aimed at moderate-income consumers and a discount retailer. The tentative deals total 45,000 square feet and cut its existing vacancy rate by more than half. Further, Phillips Edison will spend $650,000 for capital expenditures at the property.

Despite the retail sector battered by the economic slowdown and investors deterred by the capital crunch, Phillips Edison is unwavering in its practice of snatching up value-add retail properties in secondary and tertiary markets like Bridgeton.

Meanwhile, the firm is amassing $500 million in institutional equity for its fourth acquisition fund, which it plans to complete by year's end. When factoring a 65 percent loan-to-value ratio, Phillips Edison will be able to buy $1.4 billion worth of property over the next three years, or up to 200 centers, according to Bessey. And, it still has most of a $100 million unsecured revolving credit available. Also, in May, it completed a $208 million secured revolving credit facility that can be leveraged up to $500 million.

The economic shakeout, in fact, provides an opportunity for companies with cash to buy at a discount today. Credit-oriented investors who were thriving on cheap debt have been locked out of the bidding for retail centers in secondary and tertiary markets, while most flush investors are concentrating on deals in primary markets. That means less competition for Phillips Edison and others, says Bessey.

Landing properties on the cheap ultimately will be what determines the success of these deals. “You make your money on the buy. Period,” says Bessey. “If you buy it wrong, you can never achieve the returns you're hoping to.”

In recent months, cap rates for retail properties in secondary and tertiary markets have fallen to the 9 percent range, compared with 7 percent to 8 percent for retail centers in core markets. However, Joseph French, national director of retail properties at Irvine, Calif.-based brokerage Sperry Van Ness, says investors are still active in the secondary and tertiary markets.

The rise in cap rates is indicative of the end of a trend of speculative investors, emboldened by falling cap rates, participating in a “pie-eating contest,” according to David Lynn, managing director of research and investment strategy at New York City-based real estate investor ING Clarion. Heavily indebted buyers gobbled up retail properties in secondary and tertiary markets, flooding them with capital in search of yields. “People were drinking their own Kool-Aid. There probably never was a lot of really solid, sustainable growth in these secondary and tertiary markets to begin with,” Lynn says.

Nonetheless, Lynn and other experts still view secondary and tertiary markets as potential targets for retail investors. “If you look at each property on its own merits and each market on its own merits you can still find some deals that are really worthwhile to do,” he says. That's particularly true of grocery-anchored centers. In good or bad economic times, in Miami, Fla., or Miami, Ohio, consumers from all income levels buy groceries and other necessities.

Phillips Edison, while facing less competition, isn't alone in looking at small markets. BH Properties LLC of Los Angeles, Calif., and Steadfast Commercial Properties of Los Angeles both also look at secondary and tertiary markets. Steadfast is gearing up for what it expects to be a spike in acquisition opportunities in 2009 and 2010, says Jim Yoder, the company's senior vice president.

“Keep going with your business, make smart decisions, and keep your eyes wide open because there should be more opportunities … that fit in your area of expertise,” says Steve Jaffe, executive vice president of BH Properties.

Since its founding in 1991, privately held Phillips Edison has assembled a $2 billion-plus portfolio of nearly 25 million square feet — about 230 community shopping centers in 37 states. The company's strategy calls for spending a minimum of $5 million to upgrade weak centers by sprucing up the properties, enhancing tenant rosters and then holding the asset.

Key to Phillips Edison's strategy is its intense property-by-property focus. Given the company's portfolio, each of its 28 leasing agents and managers is responsible for less than one million square feet. By contrast, Bessey says he juggled 4.5 million square feet as a leasing director at Kimco Realty Corp. Larger real estate companies, he says, “can't afford to dedicate the amount of human capital and other resources necessary to focus on a property to turn it around.”