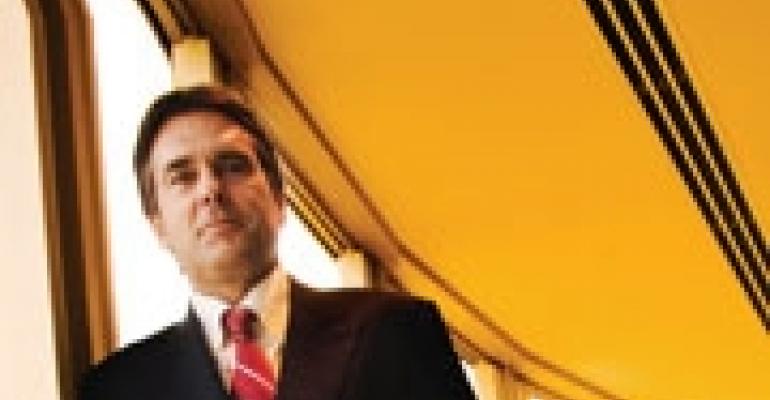 After less than eight months as CEO and director of brokerage firm Grubb & Ellis (NYSE: GBE), Scott Peters resigned from his post today, effective immediately. Gary Hunt, an independent director, has been appointed interim CEO by the board while the company searches for a replacement.

A company announcement stated that the executive left to “pursue other interests.” Still, Peters will remain with the firm in other roles, including strategic advisor, chairman and CEO of Grubb & Ellis Healthcare REIT, and executive vice president of Grubb & Ellis Apartment REIT.

NREI spoke to Hunt late Friday afternoon about the transition. “The plans for the company are to maintain the strategic vision and the business plan that management has already undertaken,” says Hunt. “So I don’t see any change in course as it relates to the execution of the strategic plans.” Finding a permanent replacement for Peters could take up to four months, Hunt added.

In February, NREI interviewed Peters about his plans to turn the struggling brokerage around. That strategy included capitalizing on its merger in December 2007 with NNN Realty Advisors of Santa Ana, Calif., a small property management firm with a specialty niche in tenant-in-common 1031 exchanges, and cross selling between the two platforms.

In a NREI cover story, “The New Face of Grubb & Ellis,” that appeared in March 2008, Peters played down the company’s drop in stock from $12 per share in May last year when the deal with NNN was first announced to $6.43 per share when the deal closed in December. “Our whole sector is experiencing headwinds right now,” said Peters. “CB Richard Ellis and Jones Lang LaSalle have seen their stocks fall in a comparable manner.”

Those headwinds have yet to die down. On Friday, GBE stock closed at $3.13 per share. The company today also announced that it would suspend future quarterly dividend payments to investors, but second quarter dividends of just over 10.25 cents per share will be paid. In a related move, the company also authorized a $25 million share repurchase program.

“We have long been critical of a dividend that we viewed as overly excessive and for which we think the company has received little credit,” Deutsche Bank analysts Brandt Sakakeeny and Christopher Mammone wrote hours after the announcement. “At current valuations, a share repurchase is materially accretive and a better use of excess cash, in our view.”

The analysts maintained a “buy” rating, noting that Grubb & Ellis already trades substantially below the target price of $12 per share. They also noted that Peters’ departure and other management changes make the brokerage an attractive takeover candidate.

In addition to the two notable announcements — the departure of Peters plus suspension of the dividend — Grubb & Ellis also announced that Devin Murphy, a former Deutsche Bank and Morgan Stanley banker, would join its board. According to Deutsche Bank analysts, “The board turned down the request from former chairman Anthony Thompson who had expressed a desire to return to the board.” Thompson, the former chairman of Grubb & Ellis and founder of NNN predecessor Triple Net Properties LLC, left the company in January.

William Blair & Co. analysts Brandon Dobell and Robert Riggs wrote that Peters’ departure was not a complete surprise, given the executive’s scant experience as a CEO of a public company and the challenges he faced, “especially against the backdrop of merger integration and company restructuring as well as a very difficult market environment.”

“The timing of the decision, however, will likely drive investor concern,” wrote Dobell and Riggs, “as the transition comes ahead of what is expected to be very difficult second-quarter results across the space.”