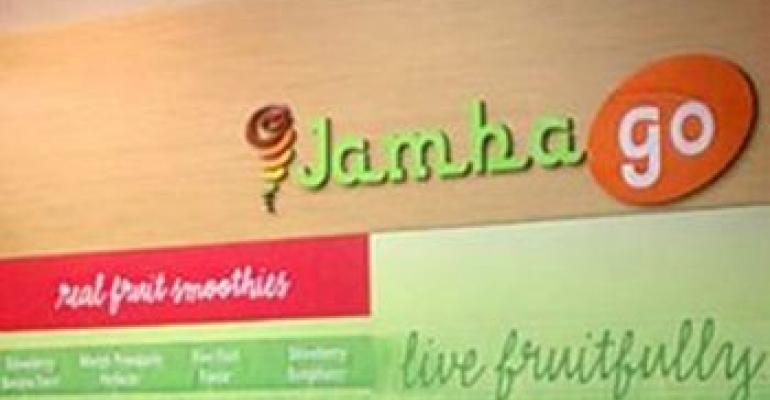 By next week, the 752-unit chain will have opened about 30 pilot locations of a new platform called JambaGo, designed as a licensed outlet that could go into self-service venues. White spoke with Nation’s Restaurant News last week at an investor conference in Santa Monica, Calif.

Though JambaGo has potential at other venues, the focus will be the move into elementary and secondary schools, where foodservice providers are looking for more healthful options as a growing number of states prohibit the sale of junk food on K-12 campuses.

“We’re leveraging technology and a system that makes us more accessible in venues we don’t have access to,” White said. “We think it’s a really incredible growth opportunity.”

Taking roughly the space of a soda fountain beverage dispenser, the JambaGo format, which White calls a wellness center, includes the chain’s branded packaged products, as well as the option of several pre-blended smoothies that White said would rival the blended-to-order quality of those made in traditional locations.

And for parents who fear the smoothies would simply add another dose of sugar into their kids diets, Jamba Juice now offers more healthful options made from all fruit with fewer calories, designed to meet the nutritional standards many states and school districts mandate for campus meals and snacks, he said.

JambaGo is the latest in a series of innovations White has spearheaded at Emeryville, Calif.-based Jamba Juice since he became chief executive in 2008, attempting to recreate Jamba Juice from a made-to-order smoothie chain into a potentially $1 billion healthy lifestyle brand.

Turnaround efforts have included an expansion of food offerings, from the addition of steel-cut oatmeal and breakfast wrap sandwiches to hot-baked flatbreads, new-and-improved pastries and frozen yogurt.

Coming soon are menu items that will leverage new TurboChef ovens now in about half of the chain’s locations, White said, though he declined to offer details.

The new menu offerings overall have helped build the chain’s attachment rate — the sale of food or snacks along with smoothies — to more than 20 percent this year, up from roughly 15 percent to 17 percent in 2009, White said, though there’s still work to do to reach his goal of a 30-percent attachment rate.