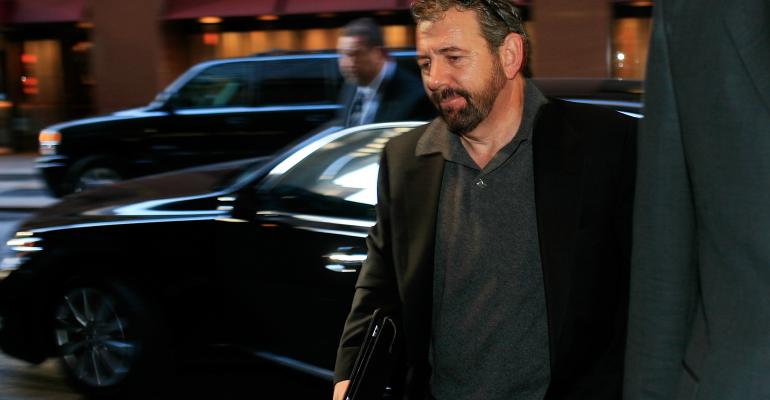 The two billionaires are battling over a piece of real estate in the working-class neighborhood of Inglewood, southwest of downtown Los Angeles.

(Bloomberg)—Steve Ballmer is battling with James Dolan over a $1 billion arena the former Microsoft chief wants to build for his Los Angeles Clippers -- right down the street from Dolan’s concert hall.

Their fight over a piece of real estate in working-class Inglewood, about 12 miles southwest of downtown L.A., has recently gotten a whole lot nastier, with accusations of scorched earth and skulduggery flying like a fast set of chest passes.

It started last year, when Dolan’s Madison Square Garden Co. sued the city for breach of contract and fraud, alleging Inglewood duped it into giving up its overflow parking lots near its music venue, the Forum, which opened five years ago. Inglewood didn’t tell the truth about its plans for the property, Dolan’s company claims, and secretly cut a deal with the Clippers for a showplace that would compete with the Forum for musical acts on nights when there’s no basketball.

Since then, the Clippers have joined the litigation and accused Madison Square Garden of using dirty tactics from an old playbook. Back in 2005, Dolan, who also owns basketball’s New York Knicks, opposed a National Football League stadium with a retractable roof in Manhattan for the Jets that would have competed with MSG for concerts and other big events. The NFL team complained of a “disinformation campaign” and a “sham” last-minute bid for the site.

The Clippers say Madison Square Garden has helped underwrite a legal attack on the Inglewood arena by housing rights advocates and even schemed to get a key witness to change her testimony about what the city’s mayor told MSG to clinch the parking lot deal. The company denies any wrongdoing and, in turn, accuses Inglewood and the Clippers of spinning a “reckless and false” narrative in the news media.

It’s all part of the great arena arms race.

Ballmer, like most team owners, will want his own space in order to gain more control over revenue, said Neil deMause, co-author of “Field of Schemes: How the Great Stadium Swindle Turns Public Money Into Private Profit.” The Clippers currently have a lease at the Staples Center in downtown L.A., which they share with the Lakers, long the town’s marquee basketball team, as well as the National Hockey League’s Los Angeles Kings.

“You don’t want to be the one who didn’t build a new arena,” deMause said, likening the boom to the rollout of new video-streaming services. “You want to be the last arena standing.”

New stadiums are under construction or already drawing spectators across the U.S., from Brooklyn to Miami to San Francisco, often promising a shot of economic adrenaline and sometimes drawing fierce opposition from residents. For their own project, the Clippers say construction alone will generate more than $450 million in wages for residents of Inglewood and surrounding cities and that the completed arena will provide 1,500 permanent jobs, 35% of them slated for locals.

The hard part is making good on that kind of promise and keeping the revenue in the community, said Andrew Zimbalist, an economics professor at Smith College in Northampton, Massachusetts.

“As a general principle, sports arenas are not engines of economic growth,” Zimbalist said. “But there’ll be gentrification -- that’s a standard problem -- and people who are renting in those areas tend to pay the price.”

Inglewood is a familiar sight to passengers landing at Los Angeles International Airport. The historically African-American city lost some of its buzz when the Lakers left the Forum, where they dominated the National Basketball Association during their 1980s “showtime” era.

But it’s in the middle of an ambitious renewal program -- and is experiencing the skyrocketing rents and shortage of affordable housing that go with it, as landlords rush to cash in on the suddenly hot market, local housing rights activists say.

“The Clippers arena proposal is a too-common example of a community bearing the burden of development in our state without sharing in the benefits,” retired U.S. senator Barbara Boxer said in a statement this month. Boxer is working with an affordable-housing group called Uplift Inglewood, which has sued the city to block the arena. Madison Square Garden said that it has donated to the California Community Foundation, which supports Uplift Inglewood, but that it isn’t involved in the litigation.

The company spent $100 million to buy and convert the Forum, which for years had been used as a church, to a live music venue and reopened it in 2014 with an Eagles concert. Across the street, on the site of the former Hollywood Park racetrack, Stan Kroenke is building a $5 billion National Football League stadium that will be home to the Rams and the Chargers. There’s a brand new, $350 million soccer stadium in L.A., and the Coliseum, where the Rams now play, just finished a $315 million renovation.

The Clippers, which Ballmer bought for $2 billion the same year the Forum reopened, hope to add their arena to the building spree in time for the 2024-2025 season, when they lose their lease at the Staples Center.

And, they say, MSG is doing everything it can to stop them.

The witness who changed her testimony is Melanie McDade-Dickens, a top aide to Mayor James Butts. She was put on administrative leave this summer in an unrelated matter. In September, McDade-Dickens made 148 changes to answers she had given under oath in the litigation. Her testimony now supports MSG’s allegations.

It gets stranger. Inglewood claims McDade-Dickens’s lawyer, Carl Douglas, a veteran of the O.J. Simpson defense team, threatened the city during its investigation of McDade-Dickens, warning that she could always recant her testimony.

“You guys ought to treat my client nice,” he said in a September interview that was part of the probe, according to court filings. “MSG is going to be her best friend.”

In an interview, Douglas explained his exchange with the city’s attorney, an old friend of his, as the innocent “trash talk” of a lifelong advocate. He denied any arrangement between his client and the company. Douglas declined to discuss the focus of the investigation of McDade-Dickens.

Madison Square Garden called Inglewood’s claim that the company was involved in the witness’s about-face a “reckless allegation” and a “complete fabrication” that “underscores just how desperate the city has become as evidence mounts of its fraudulent conduct concerning the Clippers arena proposal.”

The upshot is, McDade-Dickens’s change in testimony could derail Inglewood’s bid to end MSG’s lawsuit without a trial.

The Clippers will “move ahead with plans to build the most fan friendly, technologically advanced, and environmentally sound arena in the NBA,” Chris Meany of Murphy’s Bowl LLC said in a statement, scorning Madison Square Garden’s “meritless multiple lawsuits and misinformation campaigns.” Murphy’s Bowl is the Clippers entity developing the project and covering most of Inglewood’s legal costs in the fight.

As for the impact on housing prices in Inglewood, they “will continue to rise, with or without the arena, along with those throughout Southern California,” Louis “Skip” Miller, a lawyer representing Inglewood, said in an email. “It is simplistic and disingenuous to blame regional economic tides on a sports complex that is potentially five years away from its first game.”

--With assistance from Eben Novy-Williams.

To contact the reporter on this story: Edvard Pettersson in Los Angeles at [email protected].