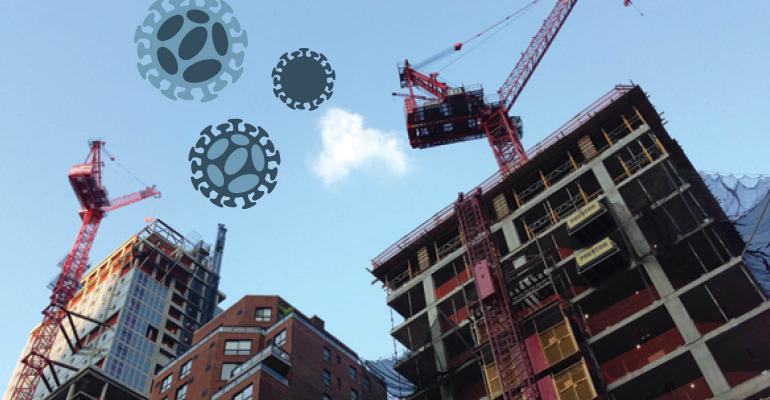 The outlook for construction and development has been thrown into deep uncertainty by the COVID-19 pandemic.

The economic disruption due to the extensive social distancing measures being taken nationwide in response to COVID-19 has been severe. That’s including bringing a halt to some construction projects already in progress as well as delaying ones that further down the pipeline that had not yet broken ground.

New York City has been Ground Zero for the pandemic in the United States. And while construction initially continued after the first wave of shutdowns, now most work has been halted, putting the city’s $66 billion construction industry in limbo. Many other states and municipalities, however, have allowed construction to continue as essential businesses even amid stay-at-home orders.

Still, given the massive slowdown in economic activity along including the jaw dropping addition of 16 million Americans to unemployment roles has thrown many projects into question. Developers are reassessing both current and future projects amid the uncertainty that will greet them when they come online.

“Every developer worth their salt is going to be reevaluating their thesis on any piece of property as this starts to settle,” says Greg Main-Baillie, executive managing director for the Florida Development Services Group at Colliers International. Most developers have an equity stake in projects they are building today and will be on the hook if it goes bust. That is a pretty big motivator to validate assumptions before moving forward, he adds.

According to an online survey conducted by the Associated General Contractors of America at the end of March, 39 percent of contractors reported that project owners had halted or canceled current construction projects. Although the survey noted that 18 percent had been ordered to halt work by government officials, the balance had halted projects due to deteriorating economic conditions.

As with much else these days in commercial real estate, the outlook for construction varies widely by property type.

Hospitality and retail have been deeply affected to date and experts expect they will continue to take a big hit over the next 90 days. In many cases, the revenue stream to cover mortgages has dried up. “So, some of our hospitality assignments are naturally going on hold,” says Main-Baillie. “Anyone speculating on what the revenue stream may be in the future is doing just that, speculating.”

At the same time, other types of projects that had shovels in the ground as of March are moving forward. For example, industrial development has not slowed down one bit due to the coronavirus, notes Main-Baillie. “We have confirmations on lease commitments, and even with the current circumstances, e-commerce is still going to be a pretty big driver,” he says. So, for projects that are already committed with financing and due diligence are generally moving forward, he adds.

Those projects that are in the ground and moving forward are going to find stronger barriers to entry popping up behind them. Developers are putting new projects on hold, and those that are trying to move forward are finding a more difficult time securing approvals and financing. Capital is still available for projects, but lenders are being very selective. “There is less capital out there for new projects, and developers are being more cautious because they have to put up their capital first,” says Vicky Schiff, co-founder, managing partner and COO of MREC Management LLC. Its Mosaic Real Estate Credit Fund invests in targeted commercial real estate debt including senior, mezzanine and preferred equity.

Since its inception in 2015, Mosaic has originated more than $2.3 billion of debt with more than half of its portfolio currently allocated to construction loans. So far, current projects the fund has financed have not been directly affected. Work is proceeding and most are set to open between six months and two years from now. So the timing has been fortunate, says Schiff. “We are still getting some requests for ground up, but we’re putting additional scrutiny on deals,” she says. “Everybody is cautious right now, but we still see opportunity in the market.”

That caution has also hit affordable housing developers such as Dominium. The company currently has 13 multifamily projects under construction across the country, including a new project that kicked off in suburban Dallas in early March. The company has not had to stop construction on any current projects, but it is taking a hard look at projects in its development pipeline as it relates to financing and viability.

In some cases, the company has slowed some of its planned projects down. “While we are definitely tapping the brakes, I wouldn’t say that we have thrown the clutch. We are still looking at new designs and actively managing a development portfolio,” says Paula Prahl, vice president of public affairs at Dominium.

That being said, that is the view today and things could change tomorrow or next week depending on what happens with COVID-19, adds Prahl. “Rent collection is a huge issue for us, and we are early in the game in collecting April rents. So, that could change our outlook considerably depending on how that goes forward,” she says. Dominium relies heavily on low income housing tax credits (LIHTCs) to fund both new construction and acquisition/rehab projects, and the firm is watching to see how the pricing on those tax credits might be impacted by COVID-19, she says.

Developers and contractors also have plenty of new COVID-related challenges that make it difficult to keep current projects on track. Although many states and municipalities are allowing construction to continue, projects still have work around social distancing guidelines and safety for workers on site, as well as stay-at-home orders that has slowed down necessary site inspections and approvals.

McShane Construction Co. noted in its recent company update that it has been continuing to work on about 95 percent of its active construction sites across the country since many municipalities have clarified that construction qualifies as an essential business. However, the company has acknowledged that their may be potential delays due to reduced crew sizes and the sometimes slower pace of inspections.

According to a survey on multifamily construction conducted by the National Multifamily Housing Council (NMHC), more than half (55 percent) of respondents said that they are currently experiencing construction delays in the jurisdictions where they operate. Among that 55 percent, 76 percent are dealing with delays in permitting and 59 percent in starts.

The NMHC construction survey also found that 73 percent of construction firm respondents indicated that they have implemented new strategies to deal with the hurdles forming in the virus’s wake such as sourcing materials from alternative locations (43 percent), staggering shifts to reduce on-site exposure (52 percent) and using technology to replace in-person transactions like inspections and approvals (67 percent).

“We are going to see a slowdown just from the fact that we are constrained by the guidelines in place, or that municipalities might not be able to come out to do physical inspections the same as they have in the past,” says Main-Baillie.