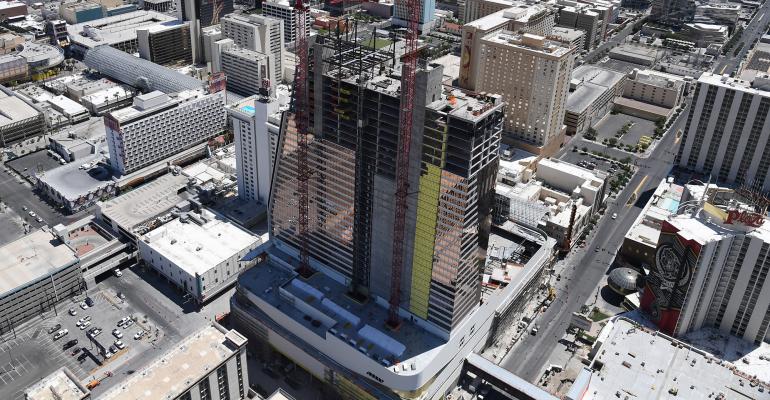 (Bloomberg)—Real estate developer Derek Stevens is opening the Circa Resort & Casino in downtown Las Vegas on Oct. 28, two months earlier than initially planned, as the city tries to bounce back from the coronavirus shutdown.

The property will be the first new casino built from the ground up in the downtown market in four decades. Stevens, working with his brother Greg, won’t open the resort’s 777-room hotel tower until later this year. The Covid-19 crisis put limits on how many workers the company could put in elevators during construction, so the developers redirected funds to complete the lower floors first.

“This was not in the original plan,” Derek Stevens said in an interview, but being able to open the casino and restaurants two months early “was a huge bonus.”

Downtown Las Vegas, which is north of the city’s famous hotel Strip, has been undergoing a bit of a renaissance thanks to the remodelings of existing properties. Revamped spots include Tilman Fertitta’s Golden Nugget and the D Las Vegas, formerly Fitzgeralds, which Stevens owns. Those casinos are located along the city’s Fremont Street, and generally attract a younger, more budget-conscious traveler.

The city’s tourism took a terrible hit with the coronavirus, which closed the state’s casino industry for nearly three months beginning in March. Nevada casinos began welcoming back guests on June 4, but most visitors have been locals, with air travel and the meeting business falling far behind.

Circa will feature 1,350 slot machines over a two-story casino and what the developer is billing as the world’s largest sportsbook, with a TV studio and room for as many as 1,000 guests.

Casino owners are placing big bets on sports wagering, believing America’s love affair with their teams will translate into increased attendance in casinos. The National Football League’s Raiders are scheduled to play their first home game at a new Las Vegas stadium this summer after relocating from Oakland, California.

Circa will also feature a parking structure, with art installations, a sound system and access specifically designed for ride-sharing companies, that Stevens is calling the “Garage Mahal.”