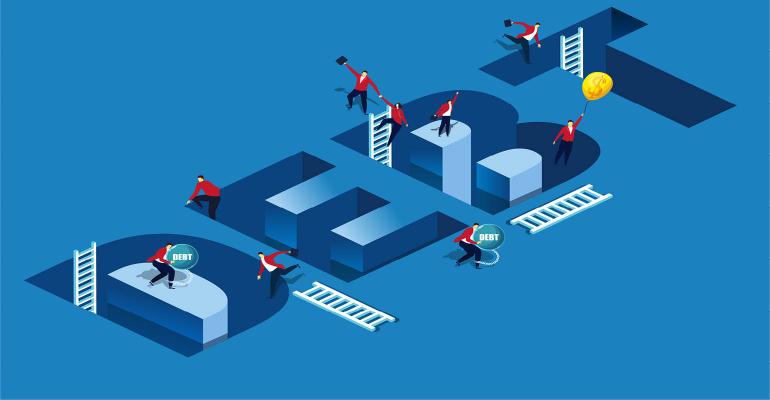 NREI spoke with Abe Bergman, co-founder and managing partner of Eastern Union, to learn more about the initiative and the distress the firm expects to emerge among CRE lenders.

Even as many states take the first steps towards opening their economies, the damage wrought in recent months by the COVID-19 induced shutdowns is expected to take its toll. Billions of dollars are already lining up for an investment spree in distressed real estate debt and equity.

New York City-based mortgage brokerage Eastern Union is among the firms jumping into the fray. The firm has launched a Distressed Notes Initiative that will identify investors interested in purchasing lenders’ troubled mortgages. Through the program, the company aims to help community banks and private debt funds find buyers for their distressed debt.

Day-to-day management of the new unit will be handled by Eastern Union vice presidents Mark Rosenzweig and Boruch Mandel, both senior real estate finance executives at the firm.

NREI spoke with Abe Bergman, co-founder and managing partner of Eastern Union, to learn more about the initiative and the distress the firm expects to emerge among CRE lenders.

NREI: Can you briefly describe how your new Distressed Notes Initiative will work?

Abe Bergman: Our primary goal is to help out lenders, and as a byproduct, the client base that we know and have relationships with. So, it is not a matter of just going out and trying to become a broker of notes. Obviously, we are looking to get paid for our work, but this is really about looking at where we can support our lender base.

One of the things we know from the past is that there are a lot of people that show up during these times of crisis that look to take advantage and put pressure on lenders who are looking to sell distressed paper to get the best possible deal, and it is not always an equitable deal. What we’re really looking to do is put together the best two partners where both the buyer and seller can walk out with the best deal possible under a distressed situation.

NREI: Do you think these are going to be one-off loans or portfolios or both?

Abe Bergman: I think it can go either way. Our vision is that it would be more one-off loans, because that’s where we can really add the value. Our expectation is that a greater focus will be on selling them on an individual basis, which will maximize returns on both sides of the table. But, if we are approached on a portfolio, we will do that as well.

NREI: What are you hearing from your relationships with lenders and investors at this stage? Are lenders concerned about troubled loans?

Abe Bergman: On the lender side, there is a trickle of activity from lenders who are already looking to sell loans. Most of that trickle is coming from bridge or debt fund lenders. On the fund side, you have a situation where they need to turn notes into liquidity because of margin calls and things like that. From the bank side, it hasn’t really started, although we’re having a lot of conversations. They’re planning what they will do if it comes to that, but we haven’t really seen any of the banks looking to start selling. Banks don’t have that concern yet that a loan is in default, because it’s under forbearance.

NREI: What about interest on the investor side?

Abe Bergman: There is a lot of money that is lining up for it. Time will tell whether that capital will ultimately get deployed or not, but there is definitely very big interest on the buyer side. That interest ranges from the smaller individual who maybe owns 20 to 30 buildings to the larger funds that are looking to acquire in bulk.

NREI: So, do you think your buyers will be investors who are ready to take a hands-on role in managing these assets, or those that are just looking to buy distressed notes?

Abe Bergman: This is exactly why we feel we can add value in the space. There are both of those buyers lined up to buy. The ones that are buying in bulk are focused on a paper game. They’re going to go to the owners and see if they can work out a deal, or they’re going to separate the bulk package into different tranches and sell it off to flip the paper. The only way they stand a chance of making money is if they get a severe discount on the acquisition.

Then you have the second type of buyer who says, “you have a note on an apartment building in the Bronx. I own apartment buildings in the Bronx. Therefore, I understand what that building could be worth.” They do their underwriting and math, and they tend to pay more for that note. Buyers are able to acquire a property they wanted at a number they are happy about, and the lender is happy because they are able to achieve a better sale versus someone who is going to buy at bulk at a very discounted price.

NREI: Do you have any predictions or a best guess on the extent or timing of the distress that may emerge?

The jury is still out on what happens in three, six or nine months. There are different opinions on what happens, and we want to be prepared for either situation. Hopefully, the government will keep pumping enough capital into the market so that when, God willing, COVID-19 is behind us, the market recovers quickly, and we don’t have that many distressed notes being sold.

The other possibility is that the government’s help is not going to be enough. So, when the forbearance time passes, unemployment checks run out, stimulus money has been spent, there is still high unemployment, tenants can’t pay their rent and landlords can’t pay their mortgages, then you’re going to have a lot of distressed situations being sold in the market. We still think it can go either way. There is talk about additional government relief being put out into the market. We don’t know if that will save it from coming to a point of deep distress, or at least be enough to keep everything going long enough for a quick recovery.

NREI: Given the forbearance, I would assume that it will be at least three months before we start to see distress emerge. Would you agree with that, or is there not as much forbearance being given as people think?

Abe Bergman: I think it is going to be longer than three months. From a technicality perspective, there is a process that has to be followed after the forbearance is done. For example, the lender has to give notice to the borrower that he is in default. That three months really becomes four to six months.

Going back to the question about forbearance, there has been a decent amount of forbearance given by lenders. I don’t have statistics on this, but my feeling is that it is not as much as people think. A lot of people who thought they were going to take forbearance, didn’t end up taking it. Collections in April were better than anticipated. So far, what we have been hearing is that collections have been a little bit off in April, but still ok.

On the residential side, this is very much being driven by unemployment checks and the additional government stimulus checks. What happens in July or August depends. If people are able to go back to work and companies rehire people, even if unemployment is higher than Pre-COVID, people may still be able to cover their mortgages. If not, then that’s where you start running into problems where they can’t pay their mortgages.

So, it is going to take some time before we ultimately know which way this is going. If it ends up going the route where there ends up being a lot of distress, it is not happening tomorrow. It could be potentially six months before we know the answer to that question, because we need to see July and August collections, and we need to see what happens to unemployment. Some cities that didn’t get hit as hard as New York or Los Angeles are bouncing back much faster.

NREI: Both lenders and investors are looking at what happened in the last recession. Are there some comparisons or lessons learned, or is this a completely different ballgame?

Abe Bergman: In this case, the trigger was entirely different, but unfortunately the effect is the same thing. People are out of jobs. They don’t have money to pay their rent. People tend to move back in with their parents, share apartments or move to cheaper apartments, and then you have the ripple effect. People don’t have money to spend in stores. Offices have greater vacancies and rents on the office space go down. You may have another aspect where office space may face occupancy loss because people have gotten used to working at home.

The biggest difference between 2008 and now is the timing. It will take longer to figure out what is really going on. It might drag out longer, which may end up saving the market, but we don’t know. Another big difference is that the government is deploying money into the general population versus just into the few companies that were ‘too big to fail’ that people talked about in the last recession.

We didn’t have all this stimulus money and PPP loans and all of this money coming into the general market in 2008. The bailouts in the last recession went to the big companies. They were not to the local hardware store to help keep them in business. If the government does enough to provide support, we can perhaps avoid what we saw in 2008 and 2009. So, it remains to be seen how that effects the outcome and how all this plays out.