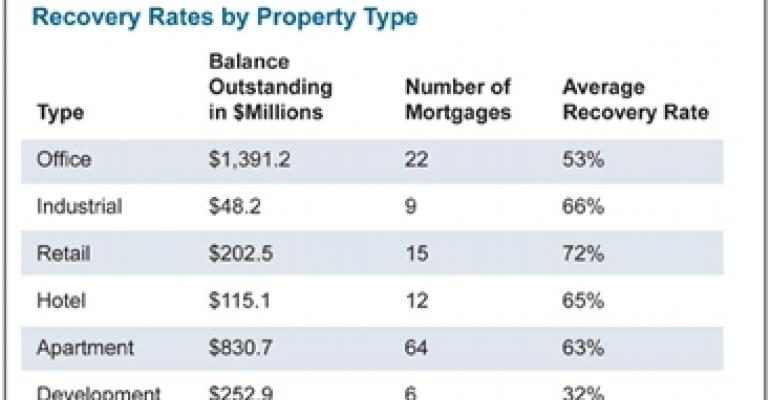 When commercial property loans go into default, how much can lenders reasonably expect to recoup from asset dispositions or the sale of mortgage notes? A new study from Real Capital Analytics (RCA) reveals that recovery rates on defaulted commercial mortgages vary by property type, location and loan-to-value ratios.

The New York-based researcher analyzed 145 defaulted commercial mortgages that have been liquidated this year. Of the $3.2 billion outstanding balance on those mortgages, lenders recovered $1.9 billion, equating to a recovery rate of nearly 60% before costs and fees.

A loan is considered liquidated, or resolved, when the property or note is sold to a third party. The recovery rate is calculated by dividing the gross proceeds from the disposition by the distressed amount (the outstanding balance of the first mortgage at the time of default). The average size of the first mortgage loans in RCA’s sample was $13 million. All data was based on properties and portfolios $5 million and above.

• Development-oriented loans such as land and construction, condo conversion and redevelopment loans have a far lower average recovery rate (48%) than acquisition or refinancing loans (66%).

• Loans on developments not yet complete have the lowest average recovery rate of any loan type, just 32% of the outstanding balance.

• Mortgages on retail properties have experienced the highest average recovery rate (72%) so far in 2009, but the sector has seen relatively few resolutions compared with the huge number of properties in default.

• Assets located in Phoenix, Tampa and Detroit have the lowest average recovery rate, while those in New York and Los Angeles metro areas have the highest recovery rate.

• Of all loans originated for the acquisition or refinancing of properties, CMBS loans liquidated this year have the lowest average recovery rate (60%) among all lenders.

• Regional and local banks have experienced the lowest overall recovery rate, but that is largely due to a heavier concentration of development and redevelopment-oriented loans.

What’s the takeaway for commercial real estate borrowers and lenders from this study? “They need to think more carefully about the structure of their funding commitments and the impact of that structure on their investments in this notoriously cyclical industry,” emphasizes Ben Thypin, senior market analyst with Real Capital Analytics.

“For instance, no one taking out a loan that was to become part of a CMBS ever considered how the myriad parties involved in a CMBS issue would impact their ability to modify, extend or buy the loan in the event the situation merited such an action,” explains Thypin. “On the other side, no one structuring CMBS ever considered that same issue, along with the inability of a special servicer to supply seller financing in the event an asset had to be taken back.”

Lenders who kept advancing funds for development-related loans as the market was tanking are now kicking themselves, emphasizes Thypin. “This boom was an era in which transactions were being conducted simply because they could be financed, and not because the transaction made sense for either the borrower or the lender.”

Most industry exerts have long held the belief that mortgages originated at the peak of the market in 2006 and 2007 would suffer the most in this down cycle due to loose underwriting standards. While that may hold true when it comes to the probability of default, the recovery rates on that vintage of loans are fairing comparatively well. Loans originated in 2003 and later all have a recovery rate averaging between 65% and 70%, while older loans have a slightly lower recovery rate.

The fact that loans from earlier in the cycle are being resolved at lower recovery rates may be more of a reflection of property-specific issues than of excess leverage, according to RCA. In 2002, as interest rates began to fall, credit flooded the market and the loan terms improved dramatically. Most loans originated prior to that point were refinanced, unless that were experiencing chronic issues of some sort.

“The variance in recovery rate by vintage is definitely what jumps out most,” says Thypin, the lead analyst who co-authored the RCA report. “To me it underlines how real estate assets will never be commoditized and how property and market level issues will always be the driving factors in valuation, making every troubled situation unique. There had to be a property level issue with a loan in 2003-2007 for it not to be refinanced, given the way debt capital was flowing.”

Today’s troubled mortgage loans that were originated early in the decade were likely on precarious footing before the recession hit in 2007, concludes Thypin, and are now being hurt by an uncooperative credit environment at a crucial time, making that maturing debt difficult to refinance.