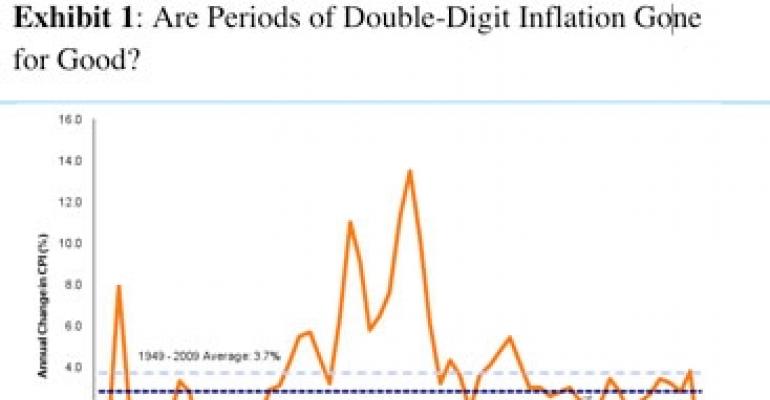 As a Hedge Against Inflation, Commercial Real Estate Investment Remains a Smart Play

In economic terms, inflation is defined as a rise in the general level of prices of goods and services in an economy over a period of time. When prices rise, each unit of currency buys fewer goods and services, eroding real consumer purchasing power. Although deflation also is a risk to the economy, moderate inflation is much more prevalent over the course of modern history.

In the long run, the most significant factor influencing inflation is the growth rate of the money supply. Inflation occurs when the nominal supply of dollars grows faster than the real demand to hold dollars. However, in the short and medium term, inflation may be largely affected by supply and demand pressures in the economy, and influenced by the relative elasticity of wages, prices, and level of interest rates.

In the U.S., inflation is estimated by calculating the rate of change of the Consumer Price Index (CPI). The CPI measures prices of a selection of goods and services purchased by a typical consumer. The magnitude of inflation — the inflation rate — is usually reported as the annualized percentage growth of the CPI Index.

The Federal Reserve’s monetary policies, which explicitly target maintaining low inflation, were partially responsible for this period of relative stability. Another factor was the tremendous productivity gains generated through the benefits of technology and lower costs of imported goods due to increasing global trade.

The CPI Index declined by 0.3% in 2009, just the third period of annual deflation since 1949. This data point has raised concerns about the potential for ongoing deflation, given a relatively weak economic recovery. In the near term, we believe that the outlook calls for a low inflationary environment, but we do not expect ongoing deflation. The low level of inflation is due to several factors:
• an anemic economic recovery;
• high unemployment;
• deleveraging in both the business and consumer sectors;
• high productivity;
• low capacity utilization;
• low cost imports from China and other emerging countries.

At the same time, we are concerned about the potential for higher inflation in the future for the following reasons:
• record money supply;
• record federal budget deficits ($1.5 trillion, or 10.6% of GDP);
• record and surging national debt ($13 trillion, or 88.9% of GDP);
• generally rising commodity prices due to demand from high-growth developing countries;
• rising federal funds rate.

The consensus forecast from 45 leading financial institutions suggests that the inflation rate will remain low, but increase steadily over the next five years [Exhibit 2]. The consensus view is an average of a wide range of forecasts, reflecting the diversity of opinions on the topic.

Despite increased concerns of additional deflation, it is telling to note that only one of the 45 economists surveyed for the Blue Chip Financial Forecasts in July is calling for even a single quarter of deflation over the next two years. Like most observers, we believe that the pace of growth will be slow over the next year, but will be strong enough to allow prices to continue to rise.

We believe that as the global economy recovers over the next few years, demand for goods and services should climb accordingly, thereby increasing inflationary pressures. We believe it is reasonable to expect a return to the mean inflation rate over the past 20 years of approximately 3%. The significant monetary expansion in recent years could lead to even higher levels.

Investors widely consider commercial real estate an asset class that can help offset the impact of inflation over the long term. In fact, that benefit is regularly cited as one of the advantages of adding real estate to a mixed-asset portfolio of investments.

Academic literature on the inflation-hedging benefits of real estate are mixed, but generally agree that private real estate is at least a partial hedge against inflation.

The Great Recession has put downward pressure on both inflation and rents. Although empirical evidence suggests that rent growth seems to keep up with inflation over the long term, the changes in rent levels largely depend on short-term supply and demand fundamentals and lease terms.

Over the past 18 months, average rents across all property types have declined significantly faster than the inflation index. Based on our market forecasts, rent growth should outpace the inflation index as the U.S. economy recovers over the next few years, particularly in more supply-constrained markets.