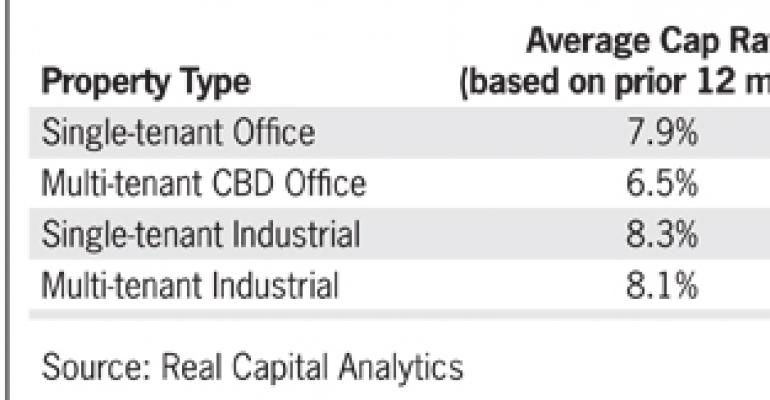 Why Investors Are Turning to Single-Tenant, Triple-Net Properties

As the nation’s commercial real estate markets continue to recover from the recent recession, primary markets like Washington, D.C. and New York City have attracted the lion’s share of real estate capital due to their high barriers to entry, lack of new construction and transparent valuation levels. This popularity has come at a cost, however, as investors are bidding up prices on trophy assets, to pre-recession levels in many cases.

Given the intense competition for multi-tenant assets in primary markets, many investors, including Cole Real Estate Investments, are instead purchasing single-tenant, triple-net-leased properties. In a triple-net lease, the tenant manages the property and pays for maintenance, insurance and taxes.

Some of the best single-tenant acquisition opportunities are found in secondary markets spread across the U.S. Institutional investors are seldom attracted to these markets, which tend to be isolated and offer few barriers to entry against substantial levels of new construction. Identifying acquisition opportunities outside the primary markets takes a larger investment in time and effort, but the rewards justify the extra work.

Throughout the recent recession in particular, single-tenant properties have performed well from the perspective of stability of income and occupancy. Simply put, single-tenant office and industrial properties today are achieving higher yields than their multi-tenant counterparts.

In addition to higher yields, the supply of single-tenant office and industrial assets is increasing. Not only does that provide a greater number of acquisition opportunities, it also eliminates the scarcity premium, which can drive down cap rates when there is too little supply.

2010 was also a good year for sellers of single-tenant industrial properties. On average, these assets achieved 91% of their asking price, which was a 2% gain over 2009.

The dynamic among buyers is constantly changing, however. In 2011, institutional buyers have stepped up their purchases of single-tenant retail, as more portfolios have traded. Institutions grew their share of the total single-tenant retail investment market from just 6% in 2010 to 20% in the first quarter of 2011.

Similarly, publicly traded REITs have also accelerated their purchases, increasing their market share from 7% of total single-tenant retail transactions in 2010 to 29% in the first half of 2011.

Sale-leasebacks, which account for about 20% of the overall single-tenant marketplace, are seeing more activity as well. Many companies are seeking to leverage low interest rates and lock in low rents by selling their owned real estate and leasing it back from the buyer, an increasingly viable option.

Sale-leaseback transactions can be an attractive source of capital, especially when other capital sources are not readily available such as the equity market, debt market or banks. As the market continues to emerge from the recent recession and companies are beginning to expand, this is a viable choice for them to consider.

Thanks to their inherent attributes — triple-net, long-term leases, creditworthy tenants, and potential for long-term capital appreciation — single-tenant commercial properties are growing in importance as a long-term income generator for many commercial real estate investors.

Robert Micera is chief investment officer for office and industrial investments at Phoenix-based Cole Real Estate Investments, and a 25-year industry veteran. Cole has approximately $8 billion in assets under management, and has acquired $1 billion of single-tenant properties year-to-date in 2011. Robert can be reached at [email protected]