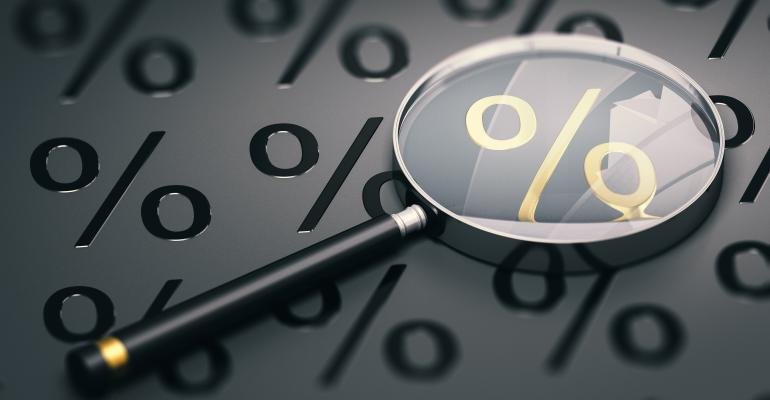 A year ago, most people thought interest rates were moving up. The reality has been just the opposite. Treasuries have plummeted and pulled lending rates down with them.

Borrowers that have been enjoying an extended run on favorable rates are seeing rates that once again are near historic lows. The 10-year Treasury has dropped roughly 110 basis points this year to hover between 1.52 and 1.60 percent. “We never fully made it back to a normal interest rate market since quantitative easing and since the end of the last cycle,” says Tim Milazzo, co-founder and CEO of StackSource, an online commercial real estate lending platform.

Falling rates in what is already a low interest rate environment are bringing renewed attention to lender rate floors. Lenders have always quoted a “floor” or minimum rate on deals. When interest rates are rising or expected to rise, those floors are simply not very important or relevant, notes Milazzo. Those rate floors are getting a lot more attention now with Treasuries that can drop sharply in even a day or two.

Floors have become a bigger part of the discussion and borrowers want to know if that interest rate floor is a point that can be negotiated, because that’s going to have an impact on the deal, he adds.

“We have hit that inflection point where the floor rate has become the rate,” adds Paul D. Mullaney, managing director, head of underwriting at Pembrook Capital Management, an investment adviser that manages commercial real estate private equity funds that focus on debt strategies. For example, Pembrook was providing preferred equity on a deal recently where there was a floating-rate mortgage from another lender in the first position. Rather than selling that property, Pembrook decided to hold onto it and realize some more upside. The firm took out the floating-rate lender with a fixed-rate life insurance lender. Before the deal closed, Treasuries dropped further, and the lending rate hit its pre-set floor rate of 4.0 percent.

Floor serves as stopgap for lenders

Every lender, whether they are a bank, life insurance company or conduit, needs to achieve a minimum return that warrants the risk they are taking. “The bottom line for both borrowers and lenders is that cost of capital has a certain floor to it,” says Joe Franzetti, a senior vice president at capital provider Berkadia. Lenders are setting firm rate floors, and they are not going to go below those floors, because it doesn’t make much economic sense for them to do so, he adds.

Floors are not necessarily moving in lock step with interest rates, and not all lenders are setting the same floor. That being said, borrowers are finding that some lenders are setting floors in the low 3.0 percent range for long-term fixed-rate loans. Debt funds that do floating rate on shorter term, three-year deals are also setting floors on their floating-rate coupons at about 200 basis point over the 30-day Libor, adds Franzetti.

The low interest rate environment is also impacting how floors are calculated. Earlier in the year, lenders were setting floors that were generally 5 to 10 basis points below what the actual coupon was at the time. As Treasuries have come down dramatically, lender spreads are increasing so that they don’t get below a coupon that is below the low 3s (3.1 to 3.4 percent). So, lenders have gone from just saying the floor on a deal is the index less a certain amount of basis points to naming a specific rate, notes Franzetti.

In addition, lenders are focused on making sure they have set a floor that makes sense from an overall yield perspective, as well as making sure they are setting a debt yield coverage ratio at a comfortable level to account for a future refinancing situation that might occur in a different interest rate environment. “You don’t want to just do your debt service coverage based on your lowest coupon in a cycle, you want to be able to know that when your loan matures, you’re going to be able to refinance,” adds Franzetti.

Pembrook Capital provides capital for different parts of the capital stack, including first mortgages, preferred equity and mezzanine. “We do a lot of short-term, floating-rate lending. So, my biggest challenge is the spread differential between Libor and the Treasury indexes,” says Mullaney. People are more motivated to borrow fixed-rate vs. floating-rate debt since the 10-year Treasury has plummeted below 1.6 percent, notes Mullaney.

The current spread between the 10-year at 160 and 30-day Libor at roughly 220 basis points means it’s about 60 basis points higher to borrower floating vs. fixed rate. For bridge lenders who are doing floating- rate, high leverage loans, it makes more sense for someone to borrow from a bank or an agency at a lower leverage point and then layer preferred equity or mezzanine debt on top of that senior loan so that the blended rate is a little bit cheaper, says Mullaney.

As a result of the low rate environment, Pembrook Capital has been doing more mezzanine and preferred equity behind a low fixed-rate mortgage as opposed to 12 months ago when the firm was doing more first mortgages on a Libor floating-rate basis.

Others do not see the price differential between fixed and floating-rate debt creating a big shift in financing strategies. “I think the capital a borrower pursues is reflective of the story of the asset they are financing,” says Franzetti. “So, we haven’t necessarily seen people do dramatically different things because Libor is higher than the 10-year Treasury. They are looking at their absolute interest rate vs. what are the requirements of my property.” That being said, the low interest rate environment is pushing some borrowers off the fence if they were thinking about refinancing, he adds.