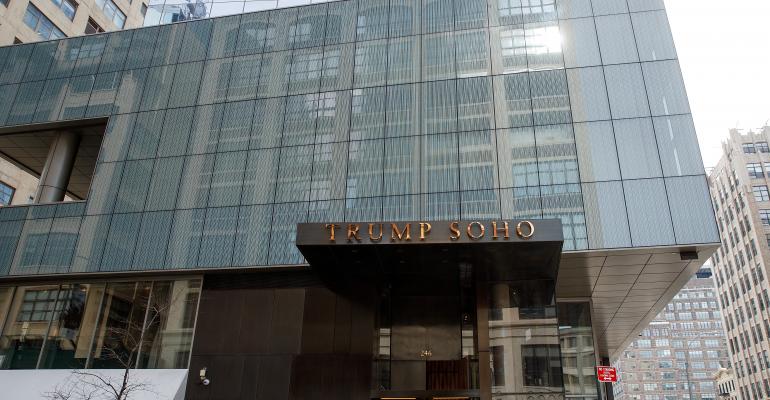 CIM Group bought the management and license agreement for the 46-story hotel from President Trump’s family business, after buying the hotel out of foreclosure in 2014.

(Bloomberg)—CIM Group, the Los Angeles-based real estate investor, is weighing a sale of the downtown New York hotel once known as the Trump SoHo, according to people familiar with the matter.

CIM is working with an adviser, which contacted potential suitors for the 46-story hotel, now known as the Dominick, said the people, who asked not to be identified because the matter is private. CIM spokesman Bill Mendel declined to comment.

The property, 246 Spring St., sits at the intersection of Manhattan’s SoHo, TriBeCa and West Village neighborhoods, and includes 391 rooms, some of which have been sold as condominiums. The hotel rooms average about 629 square feet, larger than most Manhattan offerings. The building includes 12,000 square feet of indoor and outdoor event space.

In 2017, CIM bought the management and license agreement on the property from President Donald Trump’s family business. No breakup fee was disclosed, but the amount was at least $6 million, a person with knowledge of the matter said at the time.

The involvement of Trump, who first touted the luxury hotel in 2006 on "The Apprentice," ultimately became a burden. Before the 2017 deal and name change, high-profile guests including LeBron James boycotted the hotel, and its restaurant closed, in part because of a decline in traffic. It has since been leased to a new operator.

CIM, led by Richard Ressler, took ownership of the hotel after winning a 2014 foreclosure auction. The firm previously was a lender during the property’s development by the Sapir Organization and Bayrock Group LLC, which counted Felix Sater as one of its leaders at the time. Sater is a convicted felon who had ties to Russian and American organized-crime groups.