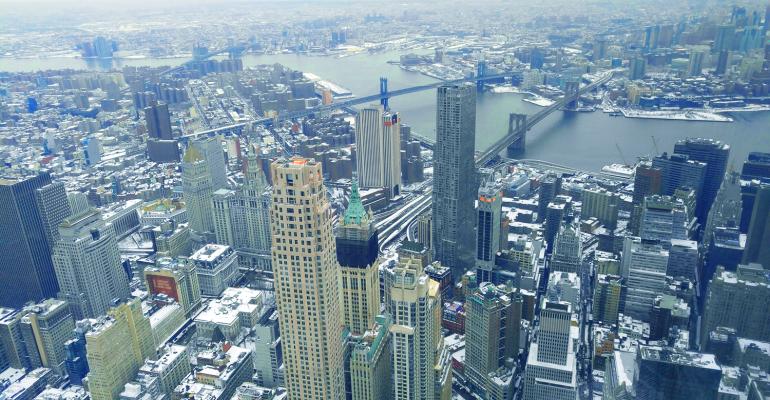 Foreign investors generally remain confident in a strong economy, solid real estate market fundamentals and steady inflows of capital into U.S. real estate, according to the 2019 AFIRE International Investor Survey.The survey was designed and administered by AFIRE and the James A. Graaskamp Center for Real Estate at the Wisconsin School of Business. NREI recently talked with AFIRE CEO Gunnar Branson for more insight on the survey results and investor views on market risks and opportunities.

Gunnar Branson: A lot of the responses have been a continuation of themes that have been evolving. On one hand, there is quite a lot of continued confidence and enthusiasm in U.S. property markets generally. The non-U.S. capital base continues to see U.S. cities as a good place for long-term investing in institutional quality real estate. What is evolving in the last few years is that as we get later and later into this recovery, more and more emphasis is being placed on understanding risks, both near-term risks and more longer term risk, and how that should impact investment or asset management strategies.

An important point to frame is that we are at historic levels in terms of the amount of non-U.S. capital coming into institutional quality commercial real estate. According to Real Capital Analytics, $61 billion came into new transactions in 2018 from investors that are outside the U.S. That is 10 times the $6.5 billion in 2002. We are no longer at our peak, which was 2015, with $96 billion in non-U.S. capital coming into the U.S. However, a lot of that was driven by some very large transactions that pushed the numbers out. One other thing that you see today that is different from 2015 is that there has been a pullback from Chinese investors.

Gunnar Branson: That is hard to tell, and likely, it depends. Investors are looking at different cities and different asset types. So, you are going to see some shifting around here and there on more attractive versus less attractive. One of the things that may be contributing to their concern in the near term, specifically European investors among some others, is that as interest rates in the U.S. have risen and they have not risen in Europe, there are additional hedging costs that need to be considered. So, for some investors, there are more financial costs to overcome.

NREI: Were there any results in this year’s survey that you found surprising?

Gunnar Branson: Although this survey has been going on for many years, we did ask some different questions. One question added was whether the impact of global warming was having any effects on investment strategy. Eighty-three percent of respondents said yes, which was a higher number than I expected, but upon reflection of conversations with members, that made absolute sense for a couple of reasons.

One, you are dealing with an investor base that has a wide range of understanding of global warming and there is less political bifurcation than you have in the United States. Secondly, global investors hold real estate properties that are often in coastal markets. Our most important and economically successful cities in the world are in coastal markets, such as New York City and Boston in the United States. All are seeing the effects of more volatile weather systems over the last few years and have seen the impact of what seem to be rising sea levels.

Everything from the Union of Concerned Scientists to other analysis does see this continuing over the next 50-150 years, as well as more impact over the next 10-20 years. Given that is the case, our investors are spending more and more time, as they are investing in and taking care of assets they already own, making sure they understand the costs and risks of those specific properties. So, I look at that 83 percent as very good news that there are grown-ups in the room who are paying very close attention to what is actually happening at the asset level and what can be done or should be done to protect those investments, as well as to protect the people who live, work and play in those assets.

NREI: Have you seen any tangible evidence yet of how concerns about climate change are impacting investment strategies?

Gunnar Branson: That is a difficult question. A lot of the things that are happening may not be as evident from the outside, but certainly it is part of their due diligence process of investing. It also is a part of how buildings are being managed and what they are building towards. Resiliency has become a fashionable word to talk about, but resiliency is being taken very seriously in institutional real estate. It is one of those issues that has a cost associated with it and a risk associated with it, and that is becoming part of the standard process for looking at real estate.

NREI: This year, the top three global cities where investors said they would like to increase exposure are New York City, followed by Boston and Seattle, which tied for second. New York City and Boston are both traditional gateway markets, but Seattle has been a strong up-and-comer in recent years. Why do you think Seattle is topping that global investor wish list these days?

Gunnar Branson: In the 10 years since the financial crisis, Seattle has just boomed in great part because of the concentration of engineering and IT talent in everything from medical technology to certainly Amazon and Microsoft and Google that are growing rapidly. That incredible creation of wealth has impacted that city in such a dramatic way. In fact, AFIRE’s annual meeting in September for members is going to be in Seattle for the first time.

It is one of those markets that is doing tremendously well, and it is one of the leaders in the global transition to a digital economy. It is easily as exciting, or more so at the moment, as Silicon Valley. It has that same kind of energy and that same intensity of investment that is taking place. So, it is certainly on the list for a lot of investors generally, and the global market is paying very close attention to it. You also have a population that is growing and is well-off and well educated, and that is increasing demand for all property types across the board.

NREI: Aside from the usual gateway markets, Atlanta, Dallas and Austin also ranked in the top 20 global list where investors would like to increase investment. What do you think is piquing foreign interest in these markets?

Gunnar Branson: One of the reasons why the U.S. enjoyed in excess of $60 billion in non-U.S. investment over the last year is that global institutional investors are looking for markets that have a few different things. One, a large amount of institutional quality assets. Two, cities that are connected to global economy and are crucial nodes to the global economy or global cities.

There are a lot of different people that create lists of what are the top global cities in the world. Generally speaking, when you talk about this group of global investors, they are talking about 30 cities around the world that are global cities. Most countries have one global city on that list. The exception to that is China, which has two or three, and the U.S., which has eight to 12. So, we have a tremendous amount of global cities that end up in that top 10 to 20 that everyone is looking at.

When you think about why an Atlanta is on that list or a San Francisco, you have to go back to the fundamentals of how they are doing economically and how plugged in they are to global growth factors for real estate demand. There are two big things for real estate demand. One is demographics. Do people want to live, work and play in that place? The other is economics and what are the economic engines for growth. Finally, what is supply and demand and where are they in balance. It has been a remarkably disciplined economic cycle or the real estate business in the United States, and I think these cities are enjoying the benefits of that. As their economies continue to grow, investors see long-term investable prospects.

NREI: Specific to views on property types, it is no surprise that a majority of investors would like to increase their exposure to multifamily and industrial properties. Yet a significant number also said they would like to reduce exposure to retail and office. How would you interpret those results?

Gunnar Branson: I don’t think it is dissimilar to the U.S. investor base in terms of why these property types are viewed as more attractive or less attractive. Certainly, office and retail are both experiencing challenges as asset types. There are very, very successful office properties, especially institutional office in the major cities. However, the growth in office is something that is not as assured as perhaps it has been in other economic cycles. What is the overall demand for office? What is the overall demand per person? Do we have enough office? Do we have too much office? All of those questions are impacting the appetite for office. That being said, depending on the investor, office continues to be a primary part of an institutional investor’s portfolio, there just may not be as much interest in expanding at this point.

Regarding retail, any newspaper you pick up is going to talk about how the Internet is impacting retail. Certainly the transformation of retail to a more omni-channel approach is something that is still volatile and difficult to predict. Only the best retail investors are actively engaged and growing. So, it is one of those areas that people have to be careful with, although there are tremendous opportunities still in retail.

Founded in 1988, AFIRE’s membership serves a base of global real estate investors and includes over 200 institutional investors, investment managers and service providers from 24 countries.