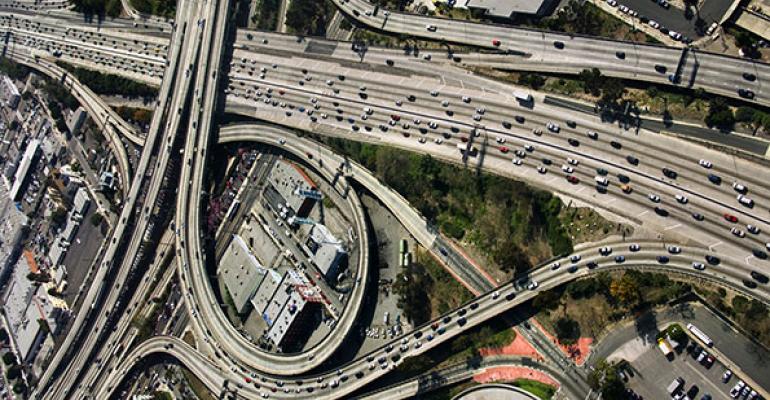 Is Infrastructure Spending on Ice?

Plenty of “dry powder” is still hoping for traction on funding for needed infrastructure expansion.

President Trump’s ambitious campaign promise to spur more than $1 trillion in infrastructure spending unleased a wave of excitement among investors and developers. More than two years later, investor groups are still in “wait and see” mode, with a growing amount of dry powder on the sidelines.

The commercial real estate industry is watching the infrastructure funding issue with avid interest. Aside from a strong multiplier effect that infrastructure projects can have on the economy, there is a correlation between infrastructure investment and incremental real estate values, particularly surrounding commercial properties within immediate proximity of public transit, notes Jared Balcavage, a research analyst at real estate services firm Transwestern in Denver. On the flip side, a lack of investment in needed infrastructure can create a negative impact by stunting economic development, he adds.

A recent Washington Post article noted that the president still hopes to get legislative approval on upwards of $1 trillion in new infrastructure spending, but Congress so far has allocated a fraction—about $20 billion—with dollars primarily flowing to existing projects. There are a number of reasons why an infrastructure bill hasn’t come to fruition, chief among them political bickering in the current environment.

“Both sides of the aisle have expressed significant interest in working together on this subject, but recent political negotiations have positioned this issue as more of a bargaining chip than a legislative priority,” says Michael Welch, U.S. head of valuation & advisory services at real estate services firm JLL.

The reality that there hasn’t been more progress on infrastructure spending is a disappointment, adds Byron Carlock, national partner, real estate practice leader, at consulting firm PwC. “The $1.2 trillion has not happened or been approved yet, but I think the intent of the administration and both sides of the aisle remain committed to coming up with an infrastructure bill,” he says. In the meantime, there has been a lot of dry powder sitting in infrastructure funds, and people are very hopeful that projects will surface that will help to deploy that capital, he notes.

Investors and developers are hoping to benefit from the positive ripple effects that new infrastructure projects would create in the private sector. Potentially, infrastructure projects can have a huge impact on sparking new development. That has clearly been the case with the subway extension in New York City, which some credit as a catalyst for Hudson Yards. “We have proof in the current times of seeing just how much new development can come as a result of responsible infrastructure investment,” says Carlock.

In addition to recommending policy suggestions to improve programs to repair and modernize transportation systems, the Roundtable also suggested targeted changes to the federal tax code to help pay for the infrastructure deficit.

As politicians gear up for the next election cycle, some fear that the outlook for infrastructure spending appears less and less favorable. “With the numerous issues the White House is facing post-Mueller report, there is very little appetite for bipartisan legislation between now and 2020,” says Heidi Learner, chief economist at real estate services firm Savills. “There are numerous bills pertaining to infrastructure that continue to be introduced, but I don’t see prospects for any legislative cooperation during the balance of this session unless it’s for one-off disaster relief,” she says.

Private capital steps into the gap

In some cities, philanthropists are stepping up and doing game-changing infrastructure investing, notes Carlock. For example, philanthropists have helped provide funding for the extension of the Klyde Warren Park in Dallas and expansion of green space around the Boston Seaport. Those efforts help to highlight that there is a part to play for public and private funds and philanthropy, he says.

“We are seeing private equity funds raise capital to be deployed in unique and creative ways,” agrees Welch. One good example of that is the recent announcement of the $4.5 billion Digital Colony fund, which will seek to support digital infrastructure behind new technologies such as the 5G network. “It’s possible we could see more innovative ways for these firms to deploy capital,” he says. “However, there continues to be a wait-and-see attitude among many investors as the future of infrastructure investment remains held up in Congress.”