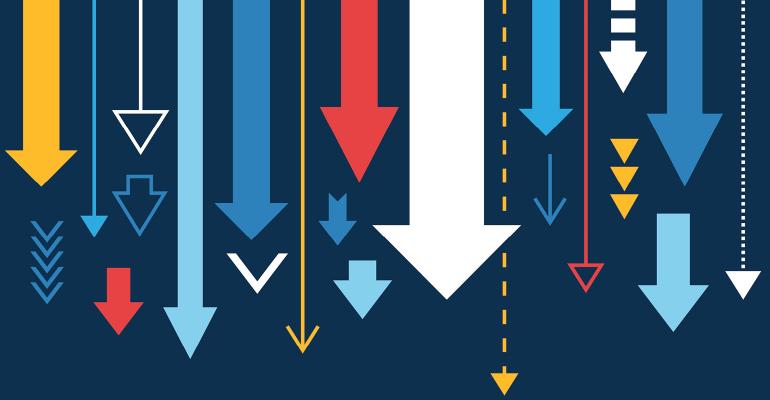 If three-month LIBOR sinks below 1 percent, it would be a major headache for the market.

(Bloomberg)—Tumbling interest rates are throwing a wrench into the collateralized loan obligation market that could eventually lead to dust-ups between different stakeholders, market watchers say.

At the heart of the issue is the plunging London interbank offered rate. Buyers of CLOs, which are tied to the gauge, are increasingly factoring the prospect of negative fixings into their due diligence as the Federal Reserve slashes its benchmark to near zero and three-month Libor sinks below 1%. While the likelihood of it going negative remains small, it would be a major headache for the $670 billion market that buys more than half of all leveraged loans.

That’s because roughly one in five CLO tranches lacks any sort of Libor floor -- thresholds that guarantee minimum payouts to debt investors should the reference rate plummet. If Libor were to eventually fall below the spread on these structures, the negative all-in coupon could mean CLO debt holders would in fact owe money back to the issuer. That may benefit buyers of the equity portions of the capital stack, but industry veterans say CLOs are simply not legally or operationally equipped to handle a reversal in cashflow.

“If Libor falls to a level that produces a negative all-in coupon, it is not clear what would happen,” said Dave Preston, a CLO analyst at Wells Fargo. “It does not appear that CLOs have a mechanism for debt investors to pay interest to the CLO. And third-party equity investors are less likely to be forgiving when they are owed payments.”

Libor prints this low are nothing new to the CLO market. The reference rate plunged below 1% in the aftermath of the financial crisis, and didn’t exceed the level again until 2017. But the sheer speed of the current decline combined with the fact the benchmark was already at depressed levels beforehand have some in the market saying investors shouldn’t rule anything out.

The specter of negative U.S. government-bond yields as monetary policymakers move to cushion the economy against the effects of the coronavirus pandemic also has some wary.

“We encourage investors to examine tranches and create game plans for these scenarios,” Preston said.

Sub-zero coupons are far from the primary concern for a market that has helped fuel a boom in risky lending and increasingly caught the attention of global regulators.

Still, the lack of explicit deal documentation on the matter adds another possible layer of risk, said Nick Robinson, a partner at law firm Allen & Overy. CLO debt holders would be extremely reluctant to make payments to issuers, setting the stage for potential litigation.

“Good luck getting them to do that absent some court order making them do so, or if it somehow becomes the prevailing market sentiment that it’s the correct action,” Robinson said. “It’s unlikely they’ll pay out of their own pocket to the issuer. Perhaps the more likely scenario is that the amount owed will be netted out of future payments to them if Libor goes up.”

As for the CLOs with Libor floors, the vast majority are set at 0%. While that ensures holders of the safer debt tranches won’t have to pay out, it raises other issues.

About 40% of the leveraged loans that are bundled into CLOs have Libor floors set as high as 1%, meaning the borrower will pay extra interest to ensure lenders receive a base payment in addition to the loan’s agreed-upon spread.

This discrepancy mostly favors CLO equity holders who take on the most risk but also have the most to gain when the structures collect more than they’re required to pay out in interest.

In the current rate environment, “there is effectively a margin mismatch between the assets and liabilities in a CLO balance sheet, with the assets paying a higher floating rate than is paid out to the liabilities,” said Charlie Wu, a CLO strategist at Morgan Stanley. “This presents an interesting opportunity for document-savvy equity investors,” but “should not be taken lightly” by the market as a whole.

While CLO debt investors have been well aware of the potential for asset-liability mismatches while negotiating the documents that govern deals, the prospect of negative Libor was simply never on the radar, according to Ryan Suda, a partner at law firm Mayer Brown.

While many CLO tranches pay well over 100 basis points above Libor, an uptick in refinancings earlier this year has spurred a decline in the average coupon on top-rated slices. In fact, one AAA tranche from February priced at just 92 basis points over the benchmark.

For Wells Fargo’s Preston, the potential disruption is reminiscent of what occurred in some older European asset-backed deals, in particular certain Spanish residential mortgage-backed securities.

When their calculated coupons went below zero as a result of negative reference rates, the ABS issuers simply withheld paying interest.

“However, ABS issuers may be more forgiving than third-party CLO equity investors,” Preston said in a report.

To contact the reporter on this story: Adam Tempkin in New York at [email protected]