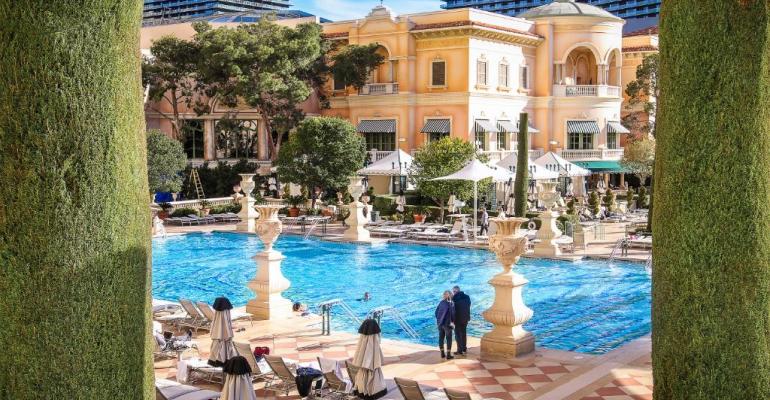 “We have a lot of options in front of us, actually very creative and interesting options,” said MGM Resorts CEO Jim Murren.

He’s cut costs, eliminating more than 1,000 jobs. Under investor pressure, he sold most of MGM’s properties to a real estate investment trust in a lease-back deal. And he welcomed Corvex Management founder Keith Meister, a Carl Icahn protege, to his board after the hedge fund built up a nearly 4% stake in the Las Vegas casino company.

Now Murren may be on the verge of unloading the company’s most iconic Vegas properties -- the namesake MGM Grand and the Bellagio. Since January, Meister and two other board members have been reviewing MGM’s real estate holdings, with an eye toward boosting the company’s share price.

On a conference call with investors Thursday, Murren said he expects to announce the review’s findings by early fall. The shares rose as much as 7.9% to $31.68 Friday in New York, the most in almost four years, after the company also reported better-than-expected revenue.

“We have a lot of options in front of us, actually very creative and interesting options,” Murren said. “We also know that our real estate is undervalued in the marketplace.”

REITs have transformed the casino industry since Penn National Gaming Inc. spun off most of its properties into one in 2013. Since then, Caesars Entertainment Corp. and MGM have also created REITs, and most of the major casino sales have involved them as buyers. Because they don’t pay income taxes, REITs can pay higher prices for properties.

In a typical transaction, the casino company continues to manage the property, while paying rent to the new owner.

The jury is still out on whether such deals add long-term value for the casino operators and their investors, however. Penn National, the pioneer in REIT deals, trades at one of the lower multiples in the industry at about 10 times earnings before interest, taxes and depreciation and amortization, according to data compiled by Bloomberg.

Investors must be convinced there’s long-term value to being a tenant over an owner. While MGM could see $6.4 billion in after-tax proceeds from the sale of the two marquee properties, analyst Harry Curtis of Instinet says he’s not convinced it’s wise.

“We are dubious of the potential value creation opportunity,” he said in a note last week.

Murren, MGM’s CEO since 2008, has dealt with activist shareholders before, including in 2016 when pressure from Land & Buildings Investment Management led MGM to sell most of its casinos to MGM Growth Properties, a REIT the company created and still controls. As a result, Murren has fewer assets left that could be used to boost his stock price.

MGM’s return to shareholders since it first sold stock in MGM Growth in April 2016 has trailed that of peers Las Vegas Sands Corp. and Wynn Resorts Ltd., which continue to own their casinos.

MGM also owns about 70% of MGM Growth, a stake worth about $5.7 billion. But selling or spinning off that business means the company would no longer collect its share of the dividends the REIT pays out, which amounted to $333 million last year.

MGM owns 56% of MGM China, worth about $3.7 billion. But the company is unlikely to unload its investment in the world’s largest gambling market, particularly since it gives Murren a calling card as he looks to win a casino license in Japan.

Lastly, there’s MGM’s stake in CityCenter, a development on the Las Vegas Strip that Murren built. He’s sold pieces, such as the mall, but has made it clear he’d like to own it all. MGM’s partner, Dubai World, has yet to show interest in selling. MGM’s half is worth about $1.9 billion, according to Joseph Greff, an analyst at JPMorgan Chase & Co.

“We are somewhat cautious here on heightened investor expectations for real estate monetization,” Greff said in a research note earlier this month.

In his decade as MGM’s CEO, and more than 20 years with the company, Murren has seen his counterparts come and go. After activist investors began circling, Caesars CEO Mark Frissora stepped down in April, and the company was sold two months later.

With investors expecting MGM to take some action this year, doing nothing probably isn’t an option.

To contact the editor responsible for this story: Nick Turner at [email protected]