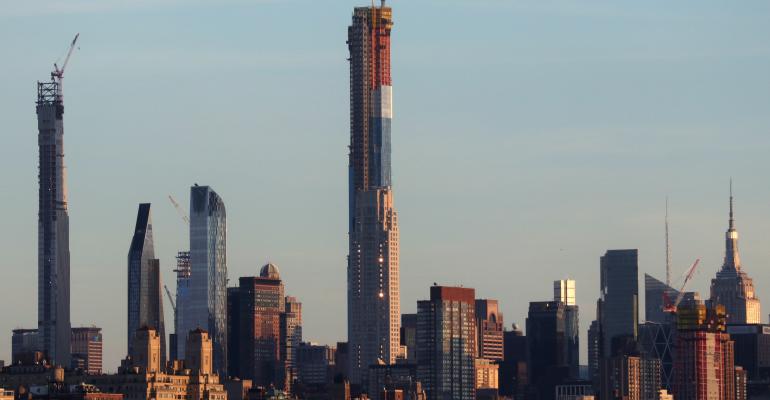 The city saw a $62 billion increase in the value of its properties during the fiscal year beginning in July.

(Bloomberg)—New York City is reaping the benefits of a construction boom.

The city set a value of $1.38 trillion for its more than one million properties for the fiscal year beginning in July, a $62 billion increase from the prior period, as the value of new construction reached the highest level in the last 10 years, according to a tentative assessment roll released by the Department of Finance Wednesday.

Real estate taxes are the largest contributor to New York City’s revenue and the primary source of funds that back its approximately $40 billion of outstanding general-obligation bonds. Citywide assessed values, which determine the value of property for tax purposes, rose 6.7%, to $273.8 billion.

The General Motors Building on Fifth Avenue remains the city’s single most expensive property, valued at more than $1.8 billion. Hudson Yards, a 28-acre development on the Far West Side of Manhattan and the largest mixed-use private real estate project in the country, was valued at $3.7 billion. The World Trade Center complex was valued at $4.4 billion.

Market and assessed values of cooperatives, condominiums and rental apartment buildings rose the most in Brooklyn, increasing 10.4% and 12.5% respectively. Bronx had the biggest increase in market value of 1-, 2- and 3-family homes, rising 9.1%, while Queens residents had the greatest increase in assessed value at 5.7%.