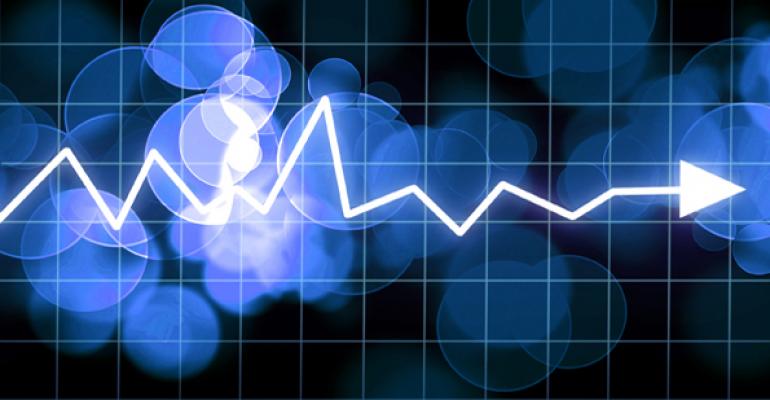 Pension funds have enjoyed a nice run of double digit returns on their real estate investments in recent years. But looking ahead to 2016, pension funds are dialing back on expectations and tweaking investment strategies to account for slower growth ahead.

According to the Pension Real Estate Association (PREA) Q3 Consensus Forecast Survey, the total return for all property types is expected to drop from 11.5 percent in 2015 to 8.5 percent in 2016 and 7.2 percent in 2017. That outlook has a distinctly pessimistic view given that returns are projected to dip below historical annual returns for real estate, which average 9.3 percent based on the NCREIF Property Index.

“We have had five years of very strong real estate returns in the U.S.,” says Greg MacKinnon, Ph.D., director of research at PREA in Hartford, Conn. “People are naturally becoming a little bit more aware of risk, and now they think the very strong years are mostly behind us.”

Given the high values and cap rate compression that has already occurred in the market, the consensus is that pension funds will realize lower returns from property appreciation going forward. The average appreciation return for all properties is expected to drop from a projected 6.3 percent in 2015 to 3.3 percent in 2016 and 2.1 percent in 2017, according to the PREA Forecast. 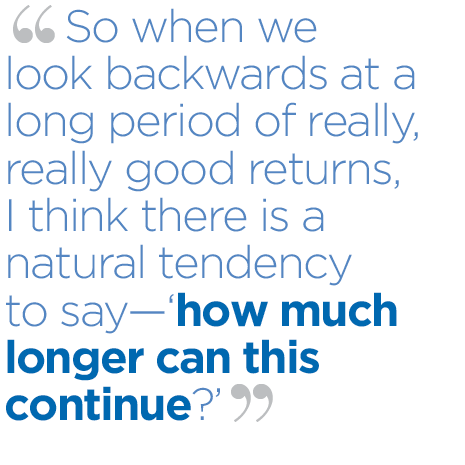 ​TIAA-CREF has had five years of double digit returns and expects to end 2015 with a sixth year of the same. “So when we look backwards at a long period of really, really good returns, I think there is a natural tendency to say—‘how much longer can this continue?’” says Martha Peyton, Ph.D., a managing director at TIAA-CREF Financial Services.

Yet TIAA-CREF’s analysis shows that the commercial real estate sector in the U.S. is very well balanced in terms of supply and demand, with construction generally remaining disciplined.

“However, what we are seeing is that pricing in terms of cap rate spreads is hovering around the long-term average spread,” says Peyton. Effectively, that translates to little room for additional cap rate compression going forward and more reliance on net operating income (NOI) growth.

For example, NCREIF’s 12-month return for the period ending September 30 was 13.5 percent.

“We’re really not seeing any weakening in those returns, but we are seeing the composition of those returns transition to be more dependent on NOI growth and less dependent on cap rate compression,” says Peyton.

Pension funds do appear to be relying less on additional cap rate compression to deliver increases in value and are giving more weight to current income, agrees Tom McNearney, chief investment officer at Transwestern. It used to be that pension funds expected 25 to 40 percent of the return to come from current cash flow and maybe 50 to 60 percent from an increase in residual value, from better cap rates.

“Now my impression is that people are weighting 70 percent or more towards current cash flow of the return,” McNearney says.

A key question is how the lower return expectations may impact pension fund investment strategies. Every investor has a different approach. Some pension funds see it as an opportune time to pull back on risk, while others are looking for investment opportunities that deliver higher yields, notes MacKinnon.

One trend that appears to be more prevalent among those pension funds that are involved in new development or value-add investments is that they are looking to shorten their investment horizons, adds MacKinnon. It is incredibly hard to time the peak of the real estate market. But pension funds are looking for deals where they can get in, create value and get out in two to three years, because they are worried that the longer term plays may occur after the peak has passed, he says.

In response to heightened macro-economic uncertainty, TIAA-CREF is increasingly focusing on “defensive approaches” to investing specific to its funds that focus on core investing. “That tweak is really reflecting caution emerging from the uptick in volatility in financial markets that began about a year ago,” says Peyton.

The company is gravitating to property types that it views as “safer” plays and more insulated from risk. For example, TIAA-CREF likes sectors that have typically performed very well through past economic cycles, such as strong regional malls and student housing properties, where supply is limited. “So we are not in any way boosting our risk profile, but rather we are looking to smooth our risk profile over the next couple of years,” says Peyton.

In general, investment sales data does reflect more investor allocation towards higher yielding strategies, notably increased investment in secondary markets and value-add opportunities. However, the U.S. is at a point in the cycle where some of the smart investors are going to shift to a strategy that involves protecting the downside, says McNearney.