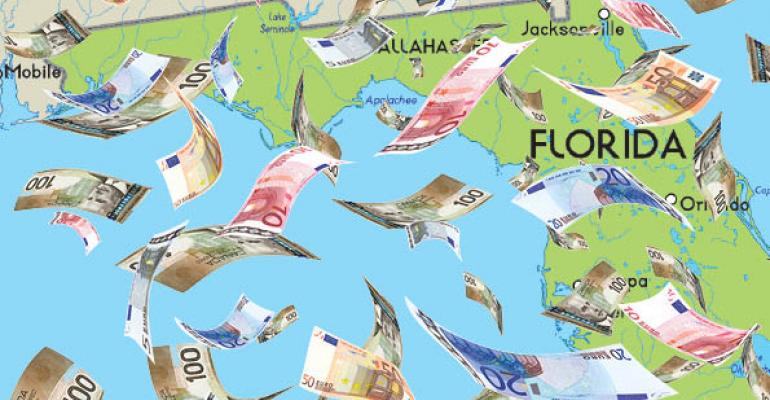 Commercial real estate in Florida has heated up to the point that foreign investors and lenders are chasing deals that extend beyond their comfort zones bringing the market to a crest.

U.S. partisan politics aside, foreigners from around the world are much more comfortable having their money here rather than in their homelands where political instability is much greater. South Florida has long been a favorite repository for cash moved from Latin America and South America. However, increased competition has pushed Miami-area prices so high that foreign investors are venturing north into central Florida and Tampa Bay in search of better values and cap rates.

Foreign investors continue to prefer multifamily and hospitality properties because they are familiar with the business models and more comfortable with the tangibility of the asset.

How they invest, however, is changing. The established model is to pay all cash for the first property and leverage the income gained for the second deal. Now, they are joining with others to buy an apartment building, convert it to a condominium, and sell the units to individuals in foreign countries who agree to leave them in the rental pool run by the management company. Why? Foreign investors are more comfortable owning units than shares in an LLC. These transactions are all cash transactions from the seller’s standpoint.

Foreigners are also making regular use of syndicators who scout properties, which are often in the Miami area. Syndicators provide a second benefit of using their track records to help obtain financing. Due to the fact that these syndicators have or do own property in the country already, and have an operation, bank accounts, etc., a lender is able to qualify them in a traditional way. If a borrower approaches a bank and doesn’t have any assets in the states already, they know they will not be able to go outside the country to collect on any deficiency in case of a default. On top of that, they can’t know if the buyer or entity is getting their funds from drugs or other illegal affairs.

Lenders are also becoming much more accommodating than in recent years. The Florida banks that survived the Great Recession are returning the market. Their loan criteria put greater weight on the sponsor’s track record than the property as they seek to minimize risk and regulatory scrutiny.

Lending has also ramped up by agents and affiliates of Wall Street firms that offer commercial mortgage-backed securities. They are less worried about default risk than in the past, a feeling supported by the fact that CMBS loan delinquencies stayed under five percent for a second month in September, according Fitch Ratings.

Adding to the frenzy, lenders are arriving from places as far as Silicon Valley, all eager to participate in the next Florida boom. Like homegrown institutions, they worked through their troubled assets and want to put their money to work again. Joining them are Fannie Mae and Freddie Mac, which compete in financing of the hottest of assets, multifamily housing.

Lenders are also willing to place debt on industrial and hospitality properties, as they expect demand for warehouse space and hotel rooms to increase with economic activity. Lenders are cooler to retail and office properties due to the perceived threat of the Internet making online shopping, oversupply of properties to lease, more efficiently designed retail and office space concepts, and working from home more popular reducing demand on office space.

The other big change is the type of borrower. Traditional, stronger, more experienced buyers have moved to the sidelines as values have increased. New buyers are getting into the market, and traditional banks are not that excited to lend to them.

The newest lenders on the scene are less concerned about risk and are putting up money for acquisition, development and refinancing. They are supporting urban infill, smaller retail developments, and re-development.

The aggressiveness extends to interest-only financing, which is coming from Fannie Mae and Freddie Mac for multi-family properties. It’s likely that CMBS lenders will follow in that category. Despite the unease associated with this type of loan, banks are probably going to join in.

Investment and loan activity has risen to a point that the market is susceptible to risks that can end the upcycle. Rising interest rates could push properties from positive to negative returns. Sales are occurring at prices above replacement value. Available properties are drying up as owners realize that while they could take a big profit, they have nowhere to invest the money and achieve as high a return, so they decide not to sell.

While the overbuilt stage is visible only in retrospect, there are signs it has arrived. Lenders that financed development in the early stages are pulling back. Newer banks and new developers are taking their place, and these less experienced players are more prone to failure.

Much of the money is going into multi-family construction. Anyone who has lived through a few real estate cycles knows what happens when too many projects come out of the ground at the same time. We may be approaching that time again so investors and brokers alike should take a cautious approach to their 2015 strategies.

Darron Kattan is a Managing Director in the Tampa, Fla. office of Franklin Street. He is a multifamily brokerage specialist with career closings exceeding $1.5 billion. His clients include private clients with large portfolios, single properties, institutional owners, national lenders, community banks, and servicing companies of all sizes. He can be reached at 813-839-7300 or [email protected].