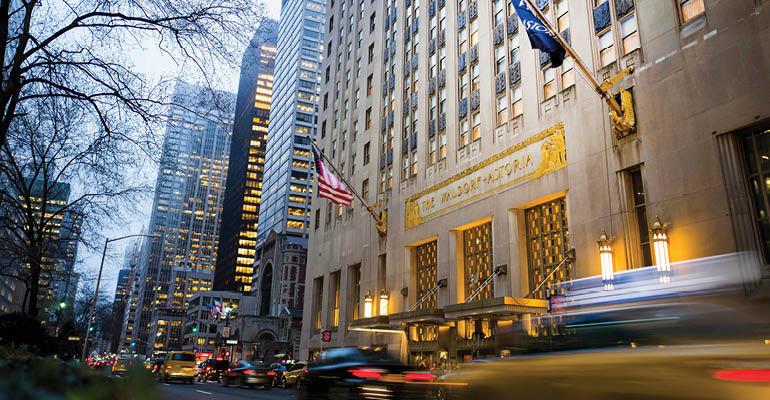 The frenzied bidding for a portfolio of high-profile luxury hotel properties owned by Anbang Insurance Group shows just how eager investors still are to put their money into full-service, luxury hotels in the U.S.—and the bigger the deal, the better.

“Real estate in the U.S., and particularly hotel properties, are a great way to weather ongoing gyrations of global markets,” says Jan Freitag, senior vice president for STR, a data provider for the hotel sector.

More than a dozen investor groups have stepped forward to bid on Anbang’s portfolio of 15 hotel properties, which include the Westin St. Francis in San Francisco, the Loews Santa Monica Beach Hotel, the JW Marriott Essex House in New York City and the Four Seasons in Jackson Hole, Wyo.

“The fact that a plethora of potential buyers has emerged to bid for Anbang’s properties reveals that the U.S. hotel market remains strong, even this far into the cycle,” says Robin Trantham, a consultant with research firm CoStar Portfolio Strategy. “Transaction volume in the nation’s 54 largest metros totaled more than $44 million last year, the largest total this cycle outside of 2015’s.”

The price keeps rising for the Anbang portfolio

The highest bid so far for the Anbang portfolio was $5.8 billion, and the difference between the highest bid and the lowest is more than $1 billion, according to the story published in May by the Financial Times.

Those are strong bids, especially considering that Anbang is under pressure from its overseers in the Chinese government. “Many people think that Anbang had overpaid for assets during their buying spree,” says Jim Costello, senior vice president with research firm Real Capital Analytics (RCA). “Anbang is a company that got too far ahead investing in property outside of China, with results that led to the jailing of senior leaders at the firm.”

The current high bid is more than Anbang paid for the portfolio just a few years ago. In September 2015, Strategic Hotels sold itself to The Blackstone Group for $6.0 billion, with a slightly larger portfolio. Just three months after the deal closed, in March 2016, Blackstone sold the company to Anbang, which initially agreed to pay $6.5 billion. That was a fast increase in value for Blackstone, though the deal shrank to just $5.5 billion, after the U.S. government forbade Blackstone from selling one of the hotels, the Hotel de Coronado, to a foreign buyer because it is located next to Naval Base Coronado in San Diego.

Private equity has money to burn

The newest bidder to emerge for the Anbang portfolio is Richard Faber, a former lieutenant to the U.K.’s billionaire Barclay twins. His firm, Strategic Advisors Ltd, is leading a consortium of investors that is one of the groups shortlisted to make binding offers for the 15-property portfolio, according to a July 9 story by Bloomberg.

Since Anbang offered the hotels for sale earlier this year, more than a dozen investor parties have come forward—the count had already reached 17 bidders in March 2019, according to coverage in the Financial Times.

“There is a lot of private equity money out there,” says Freitag. “All these funds are very well capitalized and they have to deploy their capital.”

These investors may be especially interested in the opportunity to put a large amount of capital into a single deal. “All throughout this cycle, portfolio deals such as this one have been of particularly high interest to investors,” says Trantham.

Portfolio deals have accounted for an average of around 30 percent of hotel investment sales deal volume over the past 10 years or so, considerably higher than the average during previous real estate cycles. “With hotel market fundamentals being so strong this cycle, investors have been willing and continue to be willing to take on sizeable portfolio acquisitions,” says Trantham.

The number of investment groups willing to bid billions for the Anbang portfolio shows how excited investors are by prospect of owning high-profile full-service hotels.