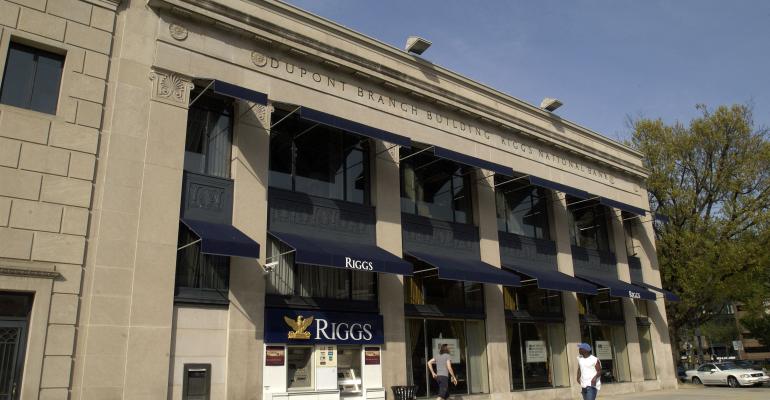 The 120-year-old building will re-open officially as a 181-room hotel.

(Bloomberg)—There’s quite a story behind Washington’s latest hotel—but depending on whom you talk with, you might hear an entirely different tale.

From history buffs, you’ll get the original backstory about the Riggs National Bank: The building was once the bank of presidents, a place where 20 commanders in chief (including Abraham Lincoln and Richard Nixon) stashed their cash.

From those who find intrigue in local lore, you’ll hear it’s built on the site where Honest Abe’s assassination was planned. The Ford Theater stands right around a corner.

From finance pros, you’ll get bombshell stories about the bank’s collapse due to money laundering with such shady figures as Chile’s Augusto Pinochet.

And from residents of downtown, you’ll get some confusion about all of the above, as well as why the beautiful, 120-year-old Romanesque Revival building has been shuttered, despite its successful recent life as a by-the-numbers Courtyard by Marriott hotel.

Either way, all that’s in the past, and the Riggs’ next chapter should be just as interesting. On Feb. 3, it will officially open as a 181-room hotel officially called Riggs Washington D.C. and operated by the up-and-coming Lore Group. With its middle-of-everywhere location—right around the corner are the National Portrait Gallery, the National Mall, and the White House—plus a rooftop event space, bold design, and subterranean bar, it’s poised to become the no-brainer hangout for city folks and a game-changing, no-compromises-required place for visitors to stay.

“D.C. is a city that has evolved dramatically in the past 10 to 15 years, especially in its restaurant scene,” says Billy Skelli-Cohen, chief executive officer of Lore Group. “We haven’t seen that [growth] yet on the hotel side as we have in other American cities, so—from a business side—we saw that as an opportunity. Opening a hotel is masochists’ work.”

Three and a half years after first laying eyes on the empty building, Skelli-Cohen is hoping that Riggs can add another success to his small but ambitious collection of hotels, which include the literary-themed Pulitzer in Amsterdam and the riverside Sea Containers hotel in London—also in a former bank building. “It’s such an amazing transformation,” he tells Pursuits of the Riggs building.

That transformation comes courtesy of Jacu Strauss, Lore’s creative director, who began by identifying aspects of the original building worth restoring—including a 22-foot-high barrel ceiling, geometric marble floors, and Corinthian columns with ornate plaster rosettes, all in the now-lobby space. “The building is so imposing, even from the outside,” he says. “It juts out a little bit [into the street] so you can see it from further away, and when you walk in, it’s just as grand.”

Revealing those monumental features—many of which had been covered up or concealed—was like “peeling an onion,” says Skelli-Cohen. “And if you could create the top 20 problematic things that you might find as you undertake a renovation of an old building, we probably ticked all of them: structural issues, asbestos, you name it.”

None of that shows now. The reception area is designed like an old-school bank teller desk. Front desk staff sit behind tall, brass bars in wood-paneled booths lined with decorative mail slots. It’s not so much a restoration as a reinterpretation of what the building once was, says Strauss, who commissioned enormous art deco-inspired chandeliers to fill the tall space and lined it with silver-leaf mirrors for a wow factor that nods to the Hall of Mirrors at Versailles in France.

Turn left and you’ll find Café Riggs, a brasserie-style, all-day spot serving caviar grilled cheese sandwiches and rib-eye for two under chandeliers hanging from an intricately coffered ceiling. (The chef, Patrick Curran, is a Momofuku alum.) Or follow the sweeping marble staircase near reception and you’ll wind up downstairs in the bank’s old vault. It was previously completely blocked off but is now a high-end bar called Silver Lyan. (It will open on Feb. 7.) Helmed by Ryan Chetiyawardana (aka “Mr. Lyan”), best known for his sustainability-driven bars in London, the edgy, subterranean space will play on the idea of “exchanges,” not just those of banks but also political ones during America’s infancy.

Take the cherry blossom. “It arrived in D.C. as a gift from Japan as a means of starting a new trade relationship with the young country,” explains Chetiyawardana, who is using the flower and its leaves as botanicals in a gin drink called the Japanese Saddle. Other drinks follow this philosophy, too: The Resolute, for instance, refers to the nearly abandoned British ship saved by Americans during the rule of Queen Victoria; timber from it was later donated to form the desk in the Oval Office. The drink is made with Officers’ Reserve Ford’s Gin, falernum, and sherry.

Upstairs, the guest rooms are filled with bold colors and patterns, like jewel boxes the Riggs might have safeguarded. On-the-nose bank jokes are few and far between, but the minibar looks like a safe (and contains the room safe), and bears a brass plaque featuring the Roman goddess of money. Marble-inspired upholstered headboards created in collaboration with local artisans at Geoffrey Benson & Son offer a subtler nod to the building’s riches. “Ninety-five percent of what’s in those rooms is custom-created for us,” says Strauss. “It all has to fit together just right.”

For a city that receives 19 to 20 million visitors annually, Washington can be surprisingly short of upscale hotels. Some of its most luxurious properties, such as the recently redone Rosewood and the Watergate, fall outside the city center and are closer to Georgetown. Of the remaining competitors within walking distance of the city’s main sites, only the Jefferson holds wide appeal for both corporate and leisure travelers. The Trump International Hotel is a spectacle caught up in its own political associations, and while the nearby Eaton hotel is very well liked by locals, it deliberately caters to liberals. This gives the Riggs a non-partisan advantage.

It’ll also fill multiple gaps for the neighborhood, according to Neil Albert, president of the Downtown DC Business Improvement District. First among them: a range of suites, including two-bedroom options that the city currently lacks. “That’s going to stand out,” he says, “and it’ll draw both families and extended stays.”

The four “First Lady” suites at the Riggs are the hotel’s pièce de résistance, with individual design schemes inspired by first ladies past, such as Louisa Adams, and by Angelica Van Buren, the eighth president’s daughter-in-law. Add a buzzy bar and a rooftop events space, and locals are excited, Albert adds. “In Downtown D.C., people expect the best of the best, and the community has started to embrace this project even before it’s opened.”

Elliott Ferguson, president of Destination D.C., the city’s tourism bureau, agrees. “That building, when it was a Courtyard by Marriott, was always an interesting juxtaposition. The location is so good, it sometimes commanded higher rates than even the JW Marriott—which is supposed to be the flagship of luxury for all of Marriott in D.C.”

Plus, says Ferguson, the hotel plays into the narrative of downtown Washington’s renaissance. After years of big-box commercial development, the area is seeing a spike in heritage-driven urban renewal projects. (See Succotash, the trendy Southern-Asian fusion restaurant in another former bank, as well as the $30 million restoration of the Carnegie Library by Apple.)

Ferguson says Washington’s rising profile over the last decade was largely due to the way the Obama family treated the city as home. Rather than jetting off on weekends to estates in sunnier places, the Obamas stuck around and patronized local restaurants, gyms, and parks. It put the city on a pedestal.

Skelli-Cohen is trying to do the same, in his own, albeit smaller, way. “We [at Lore Group] feel very strongly about respecting our surroundings, to be curious about them, to not impose our ways, and to deliver something that is relevant to the community,” he explains. Whether or not it lives long enough to count a further 20 presidents as guests, the Riggs’s latest incarnation already looks up to the task.