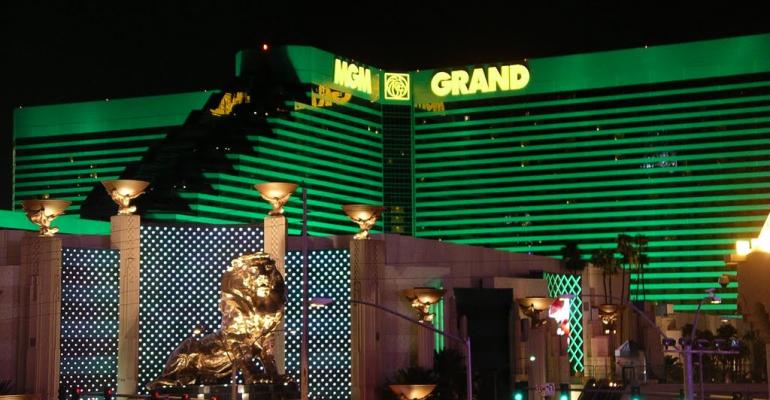 The company expects to find a buyer for the hotel by the end of the year.

(Bloomberg)—MGM Resorts International expects to announce a buyer for its flagship MGM Grand resort in Las Vegas by the end of year, marking one of the final steps toward its goal of becoming an “asset-light” casino operator.

The company agreed this month to sell the Bellagio resort in Las Vegas to Blackstone Group in a $4.25 billion deal under which MGM will continue to manage the property. MGM is also selling its Circus Circus casino in the city to real estate mogul Phil Ruffin.

Chief Executive Officer Jim Murren said on a conference call Wednesday that he’ll use the proceeds from the MGM Grand sale to reduce debt and invest in new growth opportunities, including a potential $10 billion casino in Japan and sports betting in the U.S.

The company’s transition should result in higher free cash flow per share and a more flexible financial structure that allows MGM to better capitalize on its strengths as a casino developer and manager, Murren said.

MGM Resorts is continuing to evaluate the sale of its remaining real estate assets -- including CityCenter, a joint venture with Dubai World that owns the Aria resort in Las Vegas. The company also plans to reduce its majority stake in MGM Growth Properties, a real estate investment trust, Murren said.

A half-dozen large real estate investors considered buying the Bellagio before Blackstone won out, according to Murren. He said the company is committed to reducing its stake in MGM Growth Properties to under 50% or less. The REIT could be a buyer of the MGM Grand.

“If it came down to a transaction between a third party and MGP, we’re always going to favor MGP in a close race,” Murren said.

The company has been under pressure from activist investors to boost its stock price over the past few years. Murren has taken steps to do so, including two rounds of companywide cost cutting.

In 2016, the company put the bulk of its properties into MGM Growth. That entity also has an option to purchase a Massachusetts casino, the MGM Springfield, which will become the company’s last wholly owned casino in the U.S. once the MGM Grand sale is completed.

The shares were up 1.3% to $29 in extended trading. The stock initially fell, but recovered after the MGM Grand sale plan was announced.

Murren reiterated his target of as much as $3.9 billion in earnings before interest, taxes, depreciation and amortization next year.