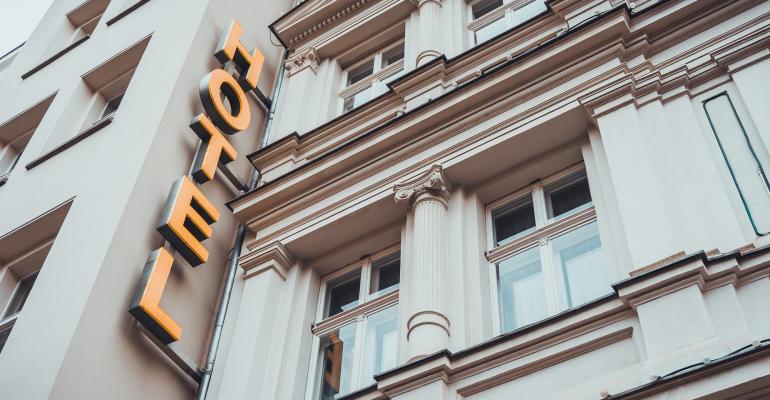 Nearly 1,000 New Hotels Are Still Opening During the Pandemic. Why?

For many new hotels, the decision to open is one that’s been years—and millions of dollars—in the making.

(Bloomberg) -- The new White Water hotel on California’s central coast has a lot going for it: a location on a moonstone-studded beach, generously sized rooms, and Scandinavian-inspired interiors by Los Angeles designer Nina Freudenberger.

Going against it? Oh, just the worldwide collapse of the hospitality industry.

White Water is one of the thousands of hotels that have either opened or will open in the midst of the Covid-19 pandemic. According to hospitality data firm STR, occupancy rates dropped to below 30% across Europe in March; numbers from M3, a firm that provides accounting services to hotels across the U.S., show that domestic occupancy figures declined by half, even as hotels slashed prices. It’s all part of a recession that the International Monetary Fund in June predicted would hit $12.5 trillion in global losses—almost 5% of the world’s gross domestic product.

That’s a grim picture for anyone starting a business of any kind, much less one associated with high overheads and extreme sums of underlying debt. Still Hilton opened 60 new hotels around the world in the second quarter of this year, while Marriott has debuted 163 properties—including four Ritz-Carltons—since the start of the year.

Even smaller, independent, and first-time hoteliers are undeterred. The owners of beauty brand Fresh made their first foray into hospitality this month with the opening of the 11-room Maker Hotel in New York’s Hudson Valley; Nobu Hotels grew its portfolio by a third in recent months with new properties in Chicago, London, and Warsaw; and PRG Hospitality Group, which owns eight boutique hotels in California, including the White Water, is about to cut the ribbon on its second summer debut. According to industry site Tophotelnews, an additional 775  hotels are scheduled to open in the Americas alone by the end of 2020.

This might sound counterintuitive, with travel at a near-standstill. But insiders say it makes sense.

For many new hotels, the decision to open is one that’s been years—and millions of dollars—in the making. Deciding to cut the ribbon is like the last leg of a too-expensive, too-long road trip: an inevitability, if you want to get home.

“A typical hotel project might take anywhere from two to five years to develop and open,” says Sean Hennessey, a hotel consultant and professor at NYU’s Jonathan M. Tisch Center of Hospitality. Including land, building costs can range from several million dollars for a budget chain hotel to billions for a lavish landmark. And maintaining a finished building comes with staffing costs that might as well be allocated toward serving paying guests.

Delaying operations is therefore, a costly proposition. “Even if it’s unsuccessful at launch, a completed project is a heck of a lot more valuable than an 80% completed one,” Hennessey adds. “You have to jump into the fire and hope for the best.”

For luxury hotels, breaking even means many things. At 50% occupancy, a property generally has enough cash flow to make payroll, assuming rates remain stable, while 70% provides a healthy return on investment. According to STR, the occupancy rate for U.S. hotels was under 43% in June.

In spite of that number, opening up gives hotels a fighting shot to cover standing such expenses as taxes, insurance, some management salaries, security, maintenance, and basic energy costs—which all must be paid, whether a property is open or closed.

It also gives them a chance to capture local business. That’s the logic driving Rocco Forte Hotels, which by September will have reopened its entire portfolio of 13 existing five-star properties around the world while forging ahead on three additional forthcoming openings.

“My business will have an outflow of $55 million, whereas normally I have an inflow of $35 million,” says Rocco Forte, the company’s chairman. He adds that operating outdoor dining venues while the weather is still nice—such as the garden restaurant at the Hotel de Russie in Rome—compensates somewhat for poor overnight business, and can be done with dramatically reduced staffing levels. “For a lot of people in the industry, it's about survival,” he says.

Location, supply and demand, debt load, morale, flexibility, and a host of additional factors also come into play when deciding whether and when to open.

“It’s a tale of two areas—urban vs. non-urban,” says PRG co-founder Britten Shuford. His company has seen occupancy rates hit highs of 80% at the surfer-friendly Cambria Beach Lodge and lows of 20% throughout Los Angeles, where it operates the still-closed Prospect hotel in Hollywood. Its design-forward Sands Hotel & Spa in California’s Coachella Valley, meanwhile, has been up 50% year-over-year since reopening in June. That picture gave Shuford faith that White Water and the San Luis Creek Lodge, which opened in August in the Pacific coast town of San Luis Obispo, would find their footing.

Target audience also makes a difference. Phil Cordell oversees Hilton’s Canopy brand of friendly, stylish urban hotels. Nine Canopies have opened so far this year—increasing the size of the portfolio by 75%—including locations in Philadelphia and Washington, D.C. Even though they’re in cities, he thinks Canopies can attract the kinds of travelers whose business has been a relative bright spot this summer: road trippers, individual business travelers, and staycationers.

“We’re going ahead with all the openings that were scheduled this year,” Cordell says.

Deciding to open a hotel doesn’t have to be an all-or-nothing proposition. Take the Maker Hotel in the popular weekend town of Hudson, N.Y., from Lev Glazman and Alina Roytberg, founders of the beauty brand Fresh, and hospitality expert Damien Janowicz.

It took the team 3 1/2 years to update, restore, and connect three historic buildings into one. They opened the property in stages—first a lounge, then a restaurant in a glass conservatory, and finally a cafe with a European coffeehouse feel. The moody, elegant hotel was scheduled to debut in April and instead launched in early August, with reservations available only from Thursday to Monday, creating a buffer for thorough cleanings between guests. With a few weekends already sold out, Glazman says he’s hoping to break even in just a few months.

For Rocco Forte, pursuing three new properties—two in Italy and one in Shanghai—means maximizing economies of scale. “The future of my group is dependent to some degree on being able to continue to grow,” Forte explains.

Luckily for him and his counterparts, new hotels aren’t expected to be profitable in their first year, anyway.

“Unlike an office building, where tenants come on board when you’re developing it, hotels are always built on spec—you don’t have any installed customer base until you open the doors,” explains NYU’s Hennessey.

Opening now allows operators to work out kinks and be prepared for a recovery, he adds. But they can’t operate at a loss for too long. “Many hotel companies have enough cash to pay overhead costs for 12 to 24 months,” he said. “Private owners likely have fewer resources to last that long.”

To contact the author of this story:
Sara Clemence in New York at [email protected]

To contact the editor responsible for this story:
Nikki Ekstein at [email protected]
Justin Ocean