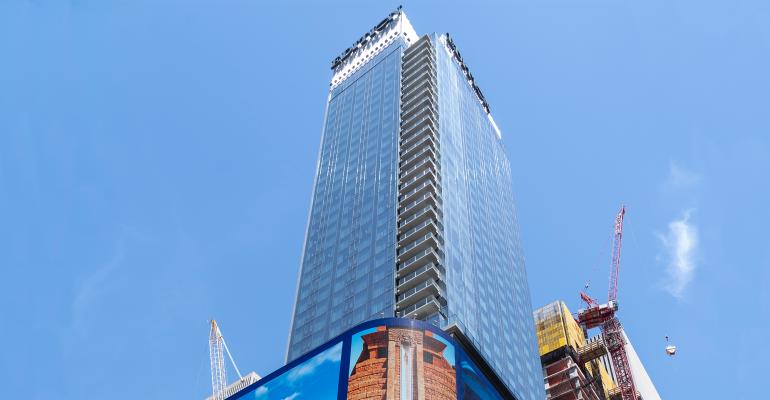 In the case of the Times Square Edition, the pandemic exacerbated existing problems, including a market glut and troubles leasing its retail component.

(Bloomberg)—A flashy Manhattan hotel that was left for dead in May is getting another chance -- but not because guests are clamoring to come back.

While Broadway theaters remain closed and corporate travelers grounded, the Times Square Edition is likely to reopen after lenders stepped in to iron out an issue with Marriott International Inc., the hotel giant’s chief financial officer said on a conference call last week.

It won’t be the last time lenders are called on to resolve a tricky situation. Nearly six months after the pandemic thrust the global hospitality industry into crisis, U.S. hotels are burning cash and missing debt payments. That’s leading lenders, reluctant to own money-losing properties, to prop up struggling hotels.

“We clearly are going to see a bunch of foreclosures,” Marriott CFO Leeny Oberg said on the call. “I think in many cases what happens is the banks want to preserve the value of the asset, in which case, keeping the brand on it is the best way to do that.”

In the case of the Times Square Edition, the pandemic exacerbated existing problems. The hotel opened in March 2019 into a market glutted with new hotel rooms and Airbnb listings, seeking luxury prices in a neighborhood that has generally appealed to more middle-class travelers.

To help the hotel stand out, owner Maefield Development signed a deal with Marriott to flag the hotel as an Edition, a brand created by Ian Schrager, the industry pioneer who co-founded the famed Studio 54 nightclub and helped invent the concept of the boutique hotel.

Still, the project was beset with challenges. Maefield struggled to lease retail space at the foot of the tower, and a group of lenders led by Natixis SA moved to foreclose on a $650 million loan in December. At the same time, Maefield Chief Executive Officer Mark Siffin was squaring off with lenders, including Natixis, in a separate oil and gas business.

Marriott eventually declared that the developer had defaulted on its contract with the lodging giant by failing to fund more than $4 million in operating expenses, court documents show. A Marriott representative declined to explain how the issue had been resolved, but said that the hotel giant is developing plans to reopen the hotel.

For his part, Schrager said in an interview that the popularity of hotels that thrust guests together in hip bars and lobbies will rebound as the pandemic recedes.

“I don’t know if there have been a lot of real paradigm shifts in the history of humanity,” he said. “Even with Noah, everyone went back to the way it was before the flood.”

The Edition isn’t the only hotel wading through issues with lenders. Nearly a quarter of hotel loans that were packaged into commercial-mortgage backed securities were at least 30 days late in July, according to the data firm Trepp. That doesn’t include loans where the borrower has received forbearance.

In past downturns, lenders have been able to paper over operating challenges by extending loans and waiting for hotel demand to recover. This time around, the shock to occupancy rates has been unusually severe, meaning that forbearance may not be enough to stem losses. Pebblebrook Hotel Trust, which owns 53 lodging properties, said on Aug. 17 that its portfolio is burning cash at a rate of as much as $12 million a month.

Lenders aren’t eager to assume those costs, so for now they’re staying patient. Kevin Mallory, global head for CBRE Hotels, says his firm is receiving a large number of requests for appraisals, indicating that forbearance won’t last forever. Distressed transactions are likely to accelerate towards the end of the year, he said.

“Lenders are not in the business of funding operating shortfalls,” Mallory said. “Coming out of global financial crisis, hotels were covering operating expenses, so lenders could hold onto them and sell when the time was right. Today, lenders might not have that luxury.”

To contact the reporter on this story: Patrick Clark in New York at [email protected]