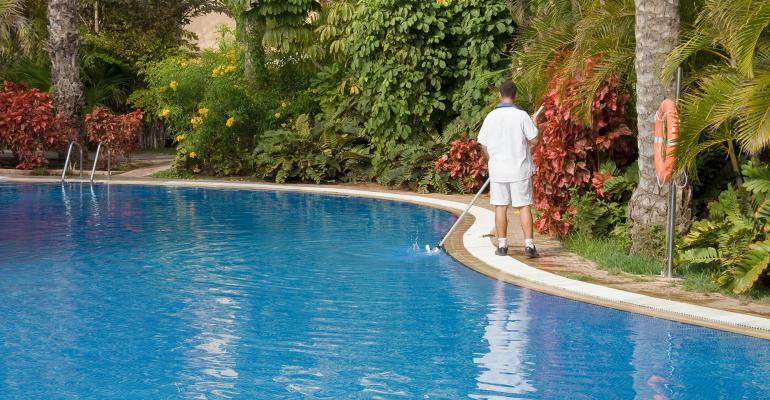 For Staff Living in Empty Hotels, It’s All Work and a Little Play

For many hotel executives, doing the dirty work now is equipping them to become better leaders later.

(Bloomberg)—On March 18, stay-at-home orders were enforced throughout California wine country, forcing most businesses to temporarily shut in the face of the Covid-19 pandemic. Among them was the Farmhouse Inn, a bucolic, 25-room boutique resort in Sonoma County, co-owned by Joe Bartolomei. But rather than pack his office and head home, he did the opposite: He moved permanently into his place of business.

“I lived here back in November during the fires and power outages,” says Bartolomei, who ordinarily lives with his wife and three kids less than two miles away. Back then, it was a two-week stint to make sure the generators were running; this time around, the to-do list and timeline are exponentially longer.

“These are not easy times,” he says. “These are roll-up-your-sleeves and get-it-done times.”

From his new home in Room 16, Bartolomei now acts as a security guard, surveying the property and parking lot from a central, second-floor perch. He’s also feeding the cats and chickens that live on the six-acre grounds, pulling weeds, replacing light bulbs, and making upgrades throughout the inn, temporarily wearing the many hats of a 90-member, mostly furloughed staff.

As with other hoteliers around the world, Bartolomei’s goal is to be able to reopen as quickly as he shut down. Global occupancy is down to about 20% across the hotel industry, according to research from Statista—meaning there’s no time to waste when recovery dawns.

“Over the last three months, I’ve sat at every desk, I’ve done just about every job that needs to be done, and now, I have a better understanding of what it takes to make this place run,” Bartolomei says. For him and many other execs who’ve turned into jacks-of-all-hospitality-trades, doing the dirty work now is equipping them to become better leaders later.

The Benefits of Sleeping Around

On May 5, the two-island Caribbean nation of Saint Kitts and Nevis announced it was Covid-19-free after its 15 diagnosed cases were discharged from the hospital. But Andrei Mocanu and Antonia Hornung, husband-and-wife general managers of Nevis’s Golden Rock Inn, are still unsure when hotels will be allowed to reopen. This means that their spell of living at the colorful, 11-cottage mountainside resort, owned by artists Brice and Helen Marden, continues.

“Two hours prior to the first lockdown on March 31, we realized that we wouldn’t be allowed back in, even though our home is just five minutes away,” says Mocanu of the swift decision to move into their workplace, along with their 9-month-old baby. On Nevis, the initial stage of the lockdown was a strict shelter-in-place order, so the couple decided it would be “better to have somebody on property, in case of anything.”

The pair has been busy. It’s backbreaking work to maintain a property that sits on 40 acres of lush, tropical grounds. As at Farmhouse Inn, their tasks include the daily pruning and watering of plants, koi fish feeding, and because they’re in the heart of mango season, collecting fruit—most to be used by the kitchen once the resort reopens.

“I also had to learn all different aspects of being a pool boy,” Mocanu jokes.

While his family hasn’t left the resort in weeks, they have moved around within it, switching their sleeping arrangements every few nights. The practice has helped them identify which showers have low water pressure, which fans squeak, and which rooms are flooded with light or get a lot of breeze.

“The first night we got into bed and realized that a garden light was shining directly into our window, illuminating the entire room,” Mocanu says, pointing to the types of issues that can be fixed or considered when complying with future guest requests.

At the recently opened Castle Hot Springs, located 50 miles north of Phoenix, the resort’s months-long closure offered the perfect time for Ryan Tomm, general manager, to add features to his list of amenities. Since they had already been budgeted before Covid-19 struck, getting them done now will minimize disruption when guests arrive.

With the help of a small task force, Tomm will have installed a three-acre farm, 2,200 agave plants, and a Via Ferrata climbing route before the hotel reopens in September. “We primarily work outdoors and have been able to maintain safe spacing,” says Tomm. “With 1,100 acres, we were distanced before it was in vogue.”

The scope of the work at Fontelunga, a rustic yet modern retreat in Tuscany, Italy, is even more ambitious. There, owners Philip Robinson and Paolo Kastelec are busy tending five dogs, an herb garden, social media accounts, all while building a new hotel. Located five minutes up the road from Fontelunga in the town of Arezzo, Borgo 69 will have 12 one- to three-bedroom villas, a stylish infinity pool, and grounds verdant with an olive grove and aromatic Mediterranean shrubs.

“There are frequent meetings with contractors, all conducted with masks—and no hand shakes. Touching elbows has become the new handshake here,” Robinson explains.

It’s not just country estates that need caring for. In London’s tony St. James district, the Stafford, housed in an historic 17th century building, currently has one occupant: Chief Operating Officer Stuart Procter. He spends each Tuesday and Friday night in a sixth-floor guest room that overlooks the London Eye, Westminster Abbey, and Big Ben.

Sure, the view’s grand, but so is the checklist of chores: running all the baths and faucets in 105 rooms, flushing all the toilets to keep the pipes clear, sorting the mail, and occasionally checking in with the multimillion-dollar redesign of rooms and suites on the fourth and fifth floors. (The construction team was allowed back into the hotel late in May.)

The task Procter loathes most is running security checks, during which he has to walk through every corner of the hotel’s centuries-old property, which he says can be quite eerie.

“The cellar is 450-plus years of age and was used as an air raid shelter during World War II, so the security walk-throughs there certainly test your limits,” he adds. “There is also a very old grandfather clock in the lobby that can make the strangest of noises. It takes some getting used to, especially when it’s dark and you’re checking the corridors at night.”

Squeezing in Philanthropy and Fun

While general managers are rolling up their sleeves as never before, plenty of desk work remains: addressing inquiries, rescheduling bookings, and overseeing financials. The higher-ups staying on site have also found time to give back.

At Farmhouse Inn, Bartolomei cleared out massive storage lockers that yielded additional beds, chairs, tables, plates, and dressers and made them available to furloughed staff in need. On Nevis, Mocanu and Hornung have been using the resort’s massive kitchen to prepare food for frontline workers. At Castle Hot Springs, the team has been delivering fresh produce (harvested from its one-acre farm and greenhouse) to the Phoenix community; all the proceeds are donated to the Society of St. Vincent de Paul, an organization helping to feed local families.

Still, they find time to enjoy living in a five-star hotel.

Tomm and his crew take relaxing soaks in the hot springs and sample fresh strawberries from the farm at Castle Hot Springs. In London, Procter has been taking advantage of his well-equipped fitness suite, especially the high-tech Wattbike Pro, an indoor model beloved by pro cyclists. For Mocanu and Hornung in Nevis, it’s been experimenting in a gourmet kitchen, taking Zoom calls by the pool, identifying new hiking trails around the resort, or simply taking pictures of the usually shy green vervet monkeys that have returned to the grounds amid relative emptiness.

As for Bartolomei? He’s indulging in some family time, swimming with his kids in the Farmhouse Inn’s pool, or streaming movies on the massive screen in the meeting room. “I’m still running the business, and if we got the green-light to open tomorrow, we could reopen because the property has been well-cared for,” he says. “But I’m not going to lie: I have made a few trips to the wine cellar.”

To contact the author of this story: Chadner Navarro in New York at [email protected].

To contact the editor responsible for this story: Nikki Ekstein at [email protected]