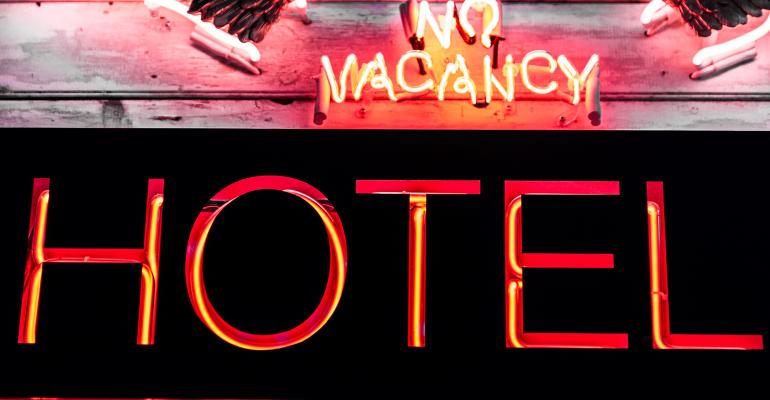 Strong Economy Fuels Growth in Hotel Rates, but Inflation Is a Worry

Average daily rates are growing, but the increase is only barely keeping up with inflation.

The performance of hotel properties keeps getting better—occupancies, room rates and revenue per available room (revPAR) continue to rise, despite worries about overbuilding.

“This is the strongest demand environment ever recorded for hotel rooms,” says Jan Frietag, senior vice president for research firm STR, based in Nashville, Tenn.

Developers are left to worry about problems in their local markets, because the national picture is very strong. “Hotels are such a street corner business. Each street corner—every submarket—is different,” says Peter Nichols, vice president and national director of the national hospitality group with brokerage firm Marcus & Millichap.

Occupancies on the rise

The percentage of hotel rooms that had been occupied over the 12 months that ended at mid-year 2018 was 65.9 percent. That up 70 basis points from the year before, according to Marcus & Millichap.

“Hotels are performing better than they have ever been,” says Nichols.

RevPAR has also increased, rising to $98.17 in July 2018, up 1.8 percent from the year before, according to STR. “We have had 101 straight months of sustained revPAR growth,” says Frietag.

That’s getting close to the longest period on record when revPAR rose every month without stopping. Through the 1990s, revPAR rose for 111 straight months—a run of revenue growth that ran for more than nine years. The current cycle is on track to beat that record. “We expect—barring any Black Swan type of event—revPAR to continue to be positive this year and next year,” says Frietag.

Consumer confidence is high, and low unemployment is giving leisure travelers the confidence to book expensive vacations in advance. Corporations have also been busy renting out blocks of hotel rooms for conferences and trade shows.

“Group demand has been stronger than expected,” says Frietag. “Corporations have money, and with low unemployment, they have to keep their people happy.”

In July, customers spent 120 million room nights in hotels in the U.S.—the strongest demand month ever recorded, according to STR.

Developers are also being relatively restrained when it comes to new construction. They now have 190,000 new hotel rooms under construction, though that number has declined for six out of the last seven months, according to STR.

“Recent hotel construction has been skewing more towards the country’s CBDs, and a lower percentage of hotels are being constructed in the suburbs,” says Jeff Myers, managing consultant for CoStar Portfolio Strategy.

The current pipeline might seem large compared to the years after the Great Recession, when few new projects were being built. But over the last 30 years, the total number of new hotels room in some stage of the construction process totaled an average of 2 percent of the existing inventory of rooms. “That is what we are seeing now,” says Nichols. “If the pipeline of new supply got into the 3 percent of 4 percent range, that would worry me.”

The biggest threat to the hotel sector today is not competition from properties, but the cost of doing business, including staffing costs, according to experts.

Average daily rates are growing, but the increase is only barely keeping up with inflation. “The real increase is around 0 percent,” says Frietag. “Hotel companies may actually see profitability decline.”

That could have a real effect on the hotel sector once relatively low wage employees begin to ask for raises. “The real wild card is labor costs,” says Frietag. “I don’t worry about the U.S. hotel industry’s ability to put heads in beds. I worry about its ability to make the beds.”