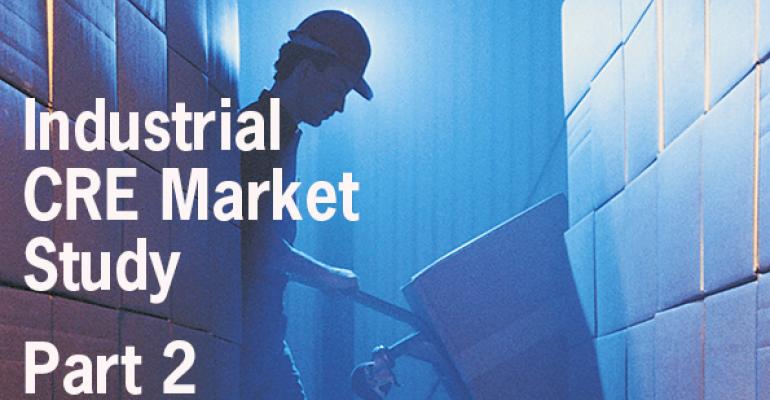 Respondents were also asked to estimate how much additional supply their markets could absorb. The majority (72 percent) said their markets could absorb additional supply equal to between 5 percent and 19 percent of current inventory. And 12 percent estimate the market can absorb new supply equal to 25 percent or more of current inventory.

An additional factor affecting supply in some markets is the conversion of old industrial boxes into other uses. Overall, 70 percent of respondents said that this activity is taking place in their markets. (That’s up slightly from 68 percent in 2016 and 64 percent in 2015.)

For example, Hamilton, NJ-based Modern Recycled Spaces buys falling-down, historic factory buildings with great character in declining neighborhoods, because they provide the right stuff for these types of conversions and can be had at a price point that keeps rents low, notes Max Popkin, director of leasing and marketing with the company. The firm’s 220,000-sq.-ft. Studio Park is an abandoned bottling facility in a gritty neighborhood of Hamilton, N.J., which happens to be near Princeton.

Modern Recycled Spaced transformed the building into an edgy, contemporary workspace, with a variety of shared amenities, including a gym, kitchen and café, indoor and outdoor spaces for socializing, ping-pong tables and conference rooms. Popkin notes that similar to co-working spaces, these buildings accommodate the needs of start-ups, allowing them to expand their space as the business grows.

The net effect of this activity varies. Of respondents that said this activity is occurring, 40 percent believe it’s leading to a lower inventory of available space in their market. An additional 43 percent of respondents said the removal of old space is being balanced by new construction. And 17 percent said that new construction is outpacing the removal of old space, leading to a net growth of inventory in their market.