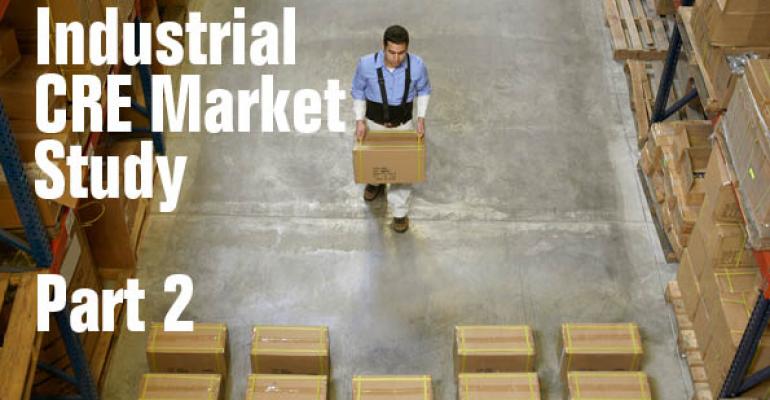 Overall, a majority of respondents to this year’s survey said they believe the industrial real estate sector is still in a recovery or expansion stage, but the sentiment has shifted greatly from a year ago. Fifty four percent of respondents to our survey said they thought the market was in a recovery/expansion phase. In early 2015 that number was 74 percent. Meanwhile, the number of respondents saying the sector is at its peak jumped to 28 percent in this year’s survey, up from 12 percent a year ago.

“Yes, we are seeing yellow flags in the market, and I think what’s driving that concern is that people are thinking that this expansion cycle may be getting long in the tooth,” says John Morris, logistics and industrial services lead for the Americas at real estate services firm Cushman & Wakefield. “There are indicators we look for, such as the massive increase in foreign capital coming into the market. You’ve also got a large amount of class-B property that we’re seeing out there for sale. Historically, that’s an early sign of a correction as sellers try to take gains in advance of uncertainty.”

Respondents were asked to rank the relative strength of their region. The results were similar to a year ago in terms of the relative rankings—with the West and the South topping the East and Midwest.

However, the sentiments improved within three of the four regions compared to 2015. On a scale of 1 to 10, respondents ranked the West at 8.3 this year—up from 7.8 a year ago. The East and Midwest also show 50 and 40 basis point increases from a year ago. The South’s ranking, meanwhile, remained flat.