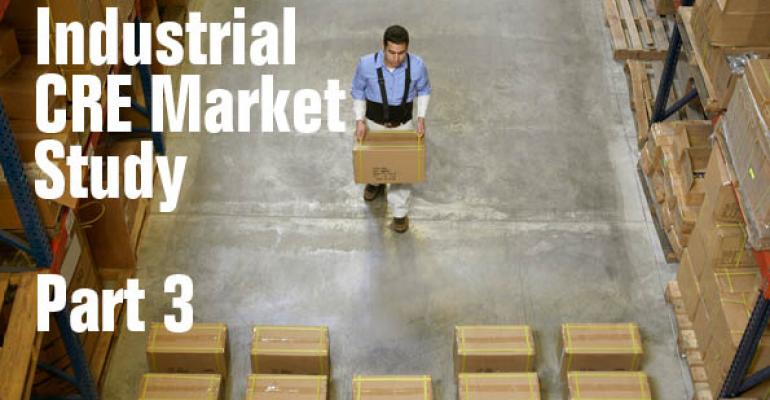 Respondents reported notable cap rate compression compared to 2015. The average regional cap rate came in at 6.4 percent in this year’s survey, compared to 7.1 percent a year ago.

But respondents expect cap rates have reached their nadir. A year ago, respondents were split, but a plurality (37 percent) did expect to see cap rates decline in 2015. Another 33 percent expected no change and 30 percent thought cap rates would increase.

This year sentiment has shifted.

But industrial real estate pros don’t expect the increase to be dramatic. The majority of respondents (86 percent) expect rates to rise between 10 and 50 basis points.

One investor group that has been active in the industrial sector of late has been foreign buyers. The industrial sector’s popularity rose to tie with multifamily for the most desired U.S. property type by foreign investors last year, according to a fourth quarter survey by the Washington, D.C.-based Association of Foreign Investors in Real Estate (AFIRE).

According to JLL, offshore capital has been the biggest participant in the market for U.S. industrial properties in 2015, accounting for more than $11.5 billion in transactions by the end of the third quarter in 2015. A prime example is Singapore-based Global Logistics Properties, which has spent about $12.7 billion in the past 24 months to buy up U.S.-based portfolios gathered by Industrial Income Trust and IndCor, making GLP the second largest owner of U.S. industrial properties after ProLogis.

“Historically, if a foreign investor wanted to bring hundreds of millions [of dollars] into U.S. real estate, they would buy trophy office,” he says. “Industrial properties weren’t big enough to be attractive. IIT and IndCor bought properties in small bunches and even one at a time, doing down-on-the-street acquisition, and the market gave them a big premium.”