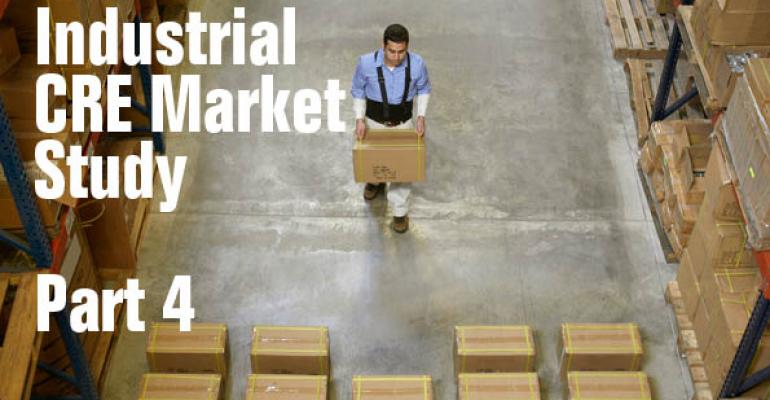 Part 4: In the Pipeline

Respondents were also asked to estimate how much additional supply their markets could absorb. The majority (64 percent) said their markets could absorb additional supply equal to between 5 percent and 14 percent of current inventory. But nearly one-fifth of respondents (18 percent) estimate the market can absorb new supply equal to 25 percent or more of current inventory.

An additional factor affecting supply in some markets is the conversion of old industrial boxes into other uses. Overall, 68 percent of respondents said that this activity is taking place in their markets. (That’s up slightly from 64 percent in last year’s survey.)

The net effect of this activity varies. Of respondents that said this activity is occurring, 40 percent believe it’s leading to a lower inventory of available space in their market. One-third of respondents said the removal of old space is being balanced by new construction. Additionally, 27 percent said that new construction is outpacing the removal of old space, leading to a net growth of inventory in their market.

Those numbers have moved from a year ago when 53 percent said it was leading to lower inventory and 14 percent said that new construction was outpacing the removal of old space.

The shift toward online shopping has led demand for this growth in speculative construction, with e-commerce firms taking large spaces and looking to establish smaller infill locations around major population centers. Infill development is underway in mature markets such as Chicago, but land constraints in the country’s major metropolitan areas will likely keep such projects in check this year, according to Margaret Donkerbrook, vice president of U.S. research for Avison Young. Another growth area includes logistic corridors, as increased traffic will likely flow through the ports as the Panama Canal expansion nears completion.

“Companies are seeking to shorten the supply chain and deliver goods more quickly,” Donkerbrook noted in her fourth quarter report. “As with retail, speed to delivery is key. Supply-chain logistics are triggering a rise in warehouse development and the construction of intermodal facilities and inland ports that are designed to handle containerized transfers.”