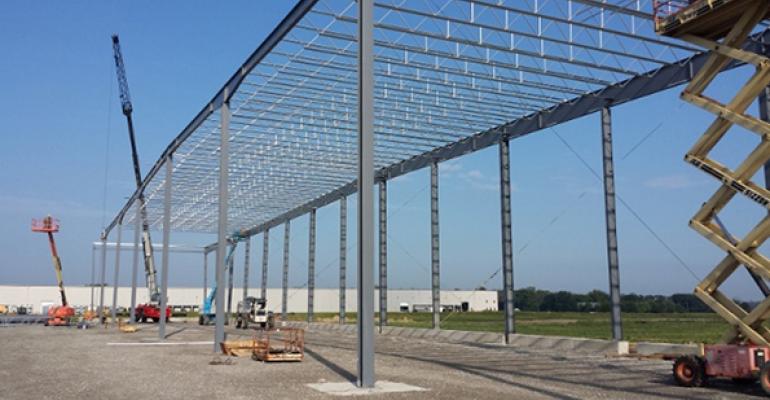 Are Industrial Developers Heading Toward Overbuilding?

A recent paper from NAIOP predicts lower absorption over the next two years, but it’s unclear if industrial developers are taking heed.

Industrial users are expected to absorb about half as much space quarterly over the next two years as they did in 2018 and 2019, when quarterly absorption averaged 60 million sq. ft., according to the semi-annual Industrial Space Demand Forecast from the National Association of Industrial and Office Properties (NAIOP).

This predictive model, which was co-developed by Hany Guirguis, professor of finance and economics at Manhattan College, and Randy Anderson, formerly of the University of Central Florida, is based on a process that involves testing more than 40 economic and real estate variables related to demand for industrial space and has been shown to be relatively accurate. In 2018, 222.2 million sq. ft. of absorption was forecast, which was in line with actual absorption of 229.5 million sq. ft.

While the International Monetary Fund (IMF) predicts that the U.S. economy will continue to expand in 2019 by 2.6 percent—down from 3.0 percent last year—due to the Federal Reserve's move to cut interest rates by a quarter of a percentage point, it expects economic growth to slow to 1.9 percent in 2020. In releasing its forecast, the IMF also noted that the U.S. economy got a boost in 2019 from businesses beefing up inventories ahead of proposed tariffs.

Currently, consumer spending, which drives 70 percent of the U.S. economy, remains healthy, but if the uncertainty that has caused businesses to pull back on spending spills over to the consumer side, it could tip the nation into recession, says Joshua Harris, vice president of strategy at construction and development firm Skanska USA and the co-author of the NAIOP report.

“There is no sign of recession presently,” notes Guirguis, but he adds that the trade war has had a negative impact on certain industry sectors, especially agriculture, construction and mining, as well as spending on durable goods and construction and mining machinery. Additionally, downsizing companies, including technology firms, cited tariffs as a reason for laying off 53,480 workers in August, up nearly 38 percent from the previous month, according to a report from Challenger, Gray & Christmas, Inc., an employment recruitment firm.

Meanwhile, developers continue to deliver new industrial product to the market based on the level of demand experienced over the last few years, which outpaced supply. However, there are already signs of slowing industrial demand: year-to-date industrial deliveries totaled 120 million sq. ft. in the second quarter, while a total of 98 million sq. ft. was absorbed, according to data from real estate services firm JLL. Right now, another 259.3 million sq. ft. of new supply is in the works.

Projects currently under development were initiated 12 to 18 months ago, when the economy was stronger and demand for industrial space far exceeded supply, notes Guirguis.  As a result, there is risk of over-supply in some markets, despite growth in e-commerce and continued strong consumer spending.

The rate of new construction starts has already fallen some, and completions are growing at a slower pace, according to Harris. He suggests that the greatest risk for oversupply exists in port cities where industrial demand is tied to imports, including the Port of New York and New Jersey.

There is concern about overbuilding in certain inland market too, including Dallas, Chicago and Atlanta, which have experienced a boom in new supply, with deliveries outpacing absorption, says Rusty Tamlyn, senior managing director in JLL's capital markets group and co-director of its national industrial platform.

With space availability increasing, pre-leasing at new projects has slowed, but asking rents have continued to escalate, Tamlyn tells NREI. Certain submarkets, including South Dallas, the I-80 corridor in Chicago and northeast Atlanta, are examples of areas experiencing a boom in new supply and new deliveries outpacing absorption. However, regardless of the amount of new supply coming on-line, the overall vacancy rate in the industrial sector remains in the low 5.0-percent range, Tamlyn adds.

Delays in projects breaking ground due to entitlement issues may exacerbate excess supply coming to market as demand slows going forward, Tamlyn notes. For example, following Hurricane Harvey, changes to the flood map delayed delivery of some Houston projects until 2020, and in general, it's taking longer to get projects through the entitlement process.  Fortunately, due to low interest rates, it's now cheaper to carry empty buildings than it was in the past, Tamlyn adds. A combination of slowing demand for industrial space and the maturing real estate cycle are also causing lenders and equity providers to become more cautious about funding new projects, he says.

On the positive side, Amazon and Walmart, which represent about 25 percent of online retail sales, are expanding their same-day delivery inventory, which is increasing demand for last mile distribution space and boosting rents and values of older, urban class-B buildings, Tamlyn notes.

Summing up, Harris says, “Even though the forecast calls for reduced industrial space demand from a couple years, it's still healthy. This is not a recessionary forecast. Absorption is still positive at this point.”