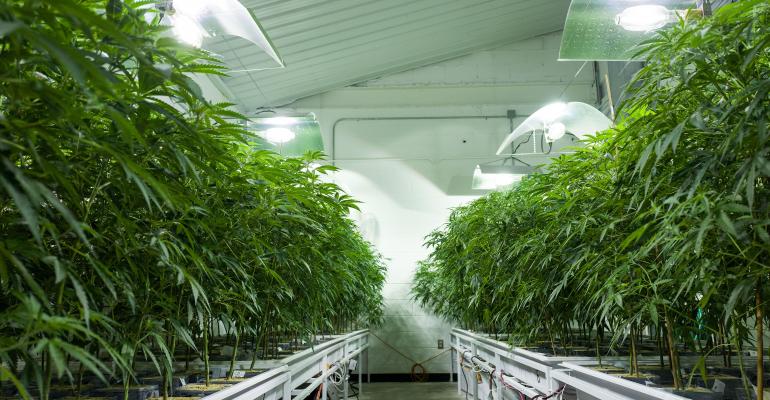 As more states legalize recreational marijuana use it creates an opportunity for high-yield CRE investment.

The Illinois legislature overwhelmingly passed a measure making possession of 30 grams of recreational marijuana legal for adult residents over age 21 and 15 grams of the recreational drug legal for non-residents, beginning January 1, 2020. It also expunges marijuana offenses of persons convicted for possessing small amounts of cannabis if the incidence did not involve violence. Other states' ballot initiatives are similar in nature, except Florida would limit cannabis possession to one ounce, and the Arizona law would make possession legal at age 18.

Moves to legalize marijuana for recreational use is about tax revenue that could be derived from expanding the cannabis market. State revenue alone from cannabis sales in Colorado, which legalized pot for recreational use in 2014, surpassed $1 billion in 2018. Illinois will tax products containing less than 35 percent THC (tetrahydrocannabinol) at 10 percent, and products with higher concentration of THC at 25 percent. An additional tax will be imposed by local governments opting in for cannabis production and sales.

Currently, medical marijuana is legal in 33 states, including five of the six planning ballot initiatives—marijuana for any use in South Dakota, and recreational cannabis is already legal in 10 of these states, plus Washington, D.C.

The expansion of cannabis legalization provides exceptional opportunities for higher yields for real estate investors, especially those acquiring properties ahead of legalization because of the risk involved, says Rick Frimmer, managing director at the New York-based accounting and advisory firm EisnerAmper and head of its national cannabis and hemp group.

These properties reap very high yields because there are a limited number of places zoned for and properties suitable for cannabis operations, so everyone is paying a premium to get in, Frimmer adds. As the industry matures and consolidates, which is beginning to happen in states that have already legalized recreational cannabis, the price per sq. ft. for such properties will become more similar to those housing other industrial uses.

Different states have different rules and regulations around cannabis production and sales. As a result, due diligence must include reviewing state rules and regulations, as well as practical matters like local zoning restrictions, the property's proximity to facilities frequented by children, sustainability of the facility for growing or production; and the need for improvements, such as upgrading electrical capacity, says

Markets offering the greatest opportunities are those on the cusp of cannabis legalization expansion, but these investments are also the riskiest because it's difficult to identify which municipalities will opt in to recreational cannabis use and, for those that do, which areas will be zoned to allow cannabis operations.

California offers an unlimited number of cannabis licenses, but the number of licenses issued by municipalities is limited. Meanwhile, Chicago recently held a lottery to award a limited number of its local cannabis licenses, Thomas notes. Fersko says that licensees should be prepared to demonstrate the quality of their business plans and financial wherewithal. That’s because the industry is fragmented and it is difficult to identify potential cannabis real estate opportunities. Thomas says that municipalities with existing medical marijuana operations are the most likely to expand into the recreational cannabis use, but suggests “riding the coattails” of qualified cannabis tenants to identify recreational cannabis real estate opportunities ahead of legalization.

Because the federal government still classifies pot as an illegal, Schedule 1 drug, investors must rely on private equity funds and family organizations for financing assets. The Safe Banking Act, which was approved by House of Representatives in September, would provide protections for banks doing business with cannabis companies and related service providers in states where cannabis is legal. This bill also would allow insurers to insure cannabis real estate assets and their contents.

The House Judiciary this month also approved a bill that would legalize cannabis on the federal level, and expunge criminal records of those arrested for possession.  The Senate, however, is unlikely to take up this bill, let alone pass it, according to a CNBC report.

While institutional investors are not investing directly in cannabis real estate, the high yields from this property type are attracting pension funds, including CalPERS (California Public Employees Retirement System), which has invested in stock of Tilray (TLRY), a Canadian maker of cannabis for adult medical and recreational use.

All of the states expected to legalize marijuana for recreational use already have cannabis infrastructure in place because medical marijuana is legal. But in South Dakota real estate investors would have to start from scratch, Frimmer says.

He notes, however, a growing trend in Canadatoward cannabis malls, where investors are establishing multi-tenant facilities that put various types of cannabis operations under one roof. Frimmer believes this is the future of cannabis real estate and is likely to make its way to U.S. cannabis markets.

The only similar U.S. concept is a 1.2-million-sq.-ft. cannabis business park in an Opportunity Zone in Williams, Calif., about an hour north of Sacramento, Calif. Built by Canna-Hub, a California-based cannabis real estate development and property management company, this facility provides huge advantages for tenant operators, including significant savings due to shared security services and the presence of on-site, third-party testing, which reduces transportation costs.