Though the West Coast ports have more than recovered from the February 2015 strike and subsequent shipping divestment, and have posted record amounts of container traffic in the first quarter, a few East and Gulf Coast ports are consistently showing better annual growth numbers.

A few industry experts have speculated that the $6.9 billion Panama Canal expansion opening in June, which will allow for ships carrying up to 14,000 twenty-foot-equivalent units (TEUs), will further expand commerce to the East and Gulf Coasts. However, land-based logistical solutions have improved enough to allow goods delivered to West Coast ports to at least reach Chicago faster than a ship can transit through the slow-moving Canal, meaning the products can reach most of the country before an East Coast port is reached.

It’s likely that goods with a short shelf-life will still primarily go through West Coast ports to ensure quicker delivery, says Walter Kemmsies, managing director, economist and chief strategies for the U.S. ports, airports and global infrastructure group with commercial real estate services firm JLL. “You want the newest flat-screen TV, or cell phone, to go through Los Angeles or Long Beach because of the obsolescence factor,” he notes. “But if you’re hauling, say, lawn chairs, instead of fighting through the containers that are needing quick movement, why not use, say, Savannah?”

Regardless of which side of the country sees more TEU volume, it’s clear that the East and Gulf Coasts are currently experiencing the highest traffic growth. Here’s a more in-depth look at the five strongest ports that don’t kiss the Pacific Ocean:

The Port of Savannah in Georgia has the highest TEU volume growth year-over-year, by 11.7 percent, to more than 3.7 million. The fact that it’s a river port, with only 42-foot depth, hasn’t slowed the port down, and the local industrial market of 48 million sq. ft. has a 6.4 percent availability rate, one of the tightest for port markets in the country, according to the “Seaport & Logistics” report from real estate services firm CBRE. The $700 million Savannah Harbor Expansion Project will deepen the channel to 47 feet for the post-Panamax shipping. “Savannah gets it, they operate their own terminal, build proper facilities and basically think of themselves as a gateway to the country,” Kemmsies says.

The Port of New York and New Jersey is the largest on the East Coast. The port saw 10.4 percent growth in TEU volume to almost 6.4 million year-over-year, according to CBRE. Of course, the massive local population is the major draw for shipping, as well as a lot of foreign trade, with 30.0 percent of the port’s volume coming from China. Though the 736 million-sq.-ft. industrial market currently has a 10.0 percent availability rate, there are about six million sq. ft. of new space under construction, and rents are projected to increase by 4.0 percent this year. The port, which is a partnership between the two states, is also undergoing the largest Post-Panamax project, a $4.3 billion capital plan that includes raising the Bayonne Bridge by 64 feet, though it will take until at least 2019 to complete the task.

The Port of Charleston also saw double-digit TEU volume growth, by 10.1 percent, to almost two million TEUs by January 2016. Charleston has an inland port and an expanding manufacturing base, including the new 2.3-million-sq.-ft. Volvo plant. Further speculative development is expected in the 50-million-sq.-ft. market, though the availability rate also pegs at just more than 10.0 percent. Charleston’s increased activity is also spurring distribution center development in cities such as Greenville, S.C., which connects further to Southeast hub cities such as Charlotte. Greenville is now one of the fastest growing industrial markets in the nation, with six million sq. ft. of new space under construction, according to CBRE.

Texas has suffered somewhat during the massive drop in oil prices, and the Port of Houston was no exception, seeing a drop in value of goods exported from $289 billion in 2014 to $251 billion in 2015. However, the Gulf Coast port still registered a 9.2 percent increase in TEU volume, to more than 2.1 million in the past year. The nearly 500 million sq. ft. of warehouse property around the port has an availability rate of only 7.9 percent, as the industrial market hasn’t suffered as much as the Texas office sector. CBRE predicts the Houston port will see a massive uptick in petrochemical shipments, helped by both a $700 million terminal improvement plan and the recent lifting of the crude export ban.

The Port of Baltimore has been a consistent performer, growing its TEU volume by an average of 8.2 percent every year since 2010, according to CBRE. This past year saw TEU volume grow by 7.8 percent, to 840,000. The port is popular because it can already accept the Post-Panamax ships without any impediment. Baltimore has availability rate of 14.0 percent, but there are less than two million sq. ft. under construction in the 161 million-sq.-ft. market. “Baltimore has taken a serious jump, the port used to only do about 600 million TEUs per year,” Kemmsies says. “It’s a terrific option for shippers who need more space and want to avoid the congestion of the mid-Atlantic ports.” 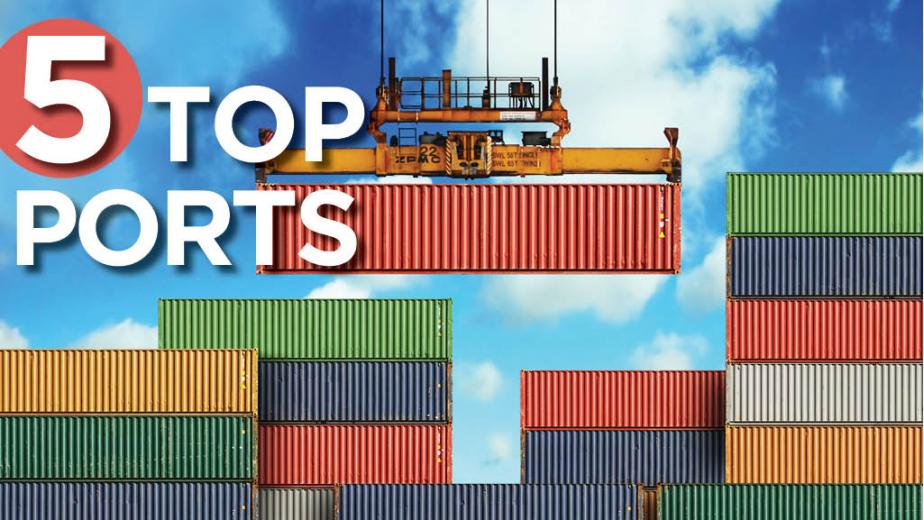