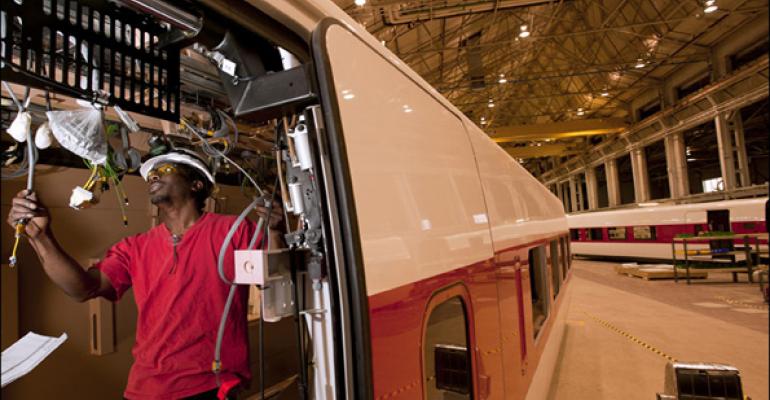 Southern and Midwestern Towns Are Already Seeing a Manufacturing Renaissance. A New Maritime Regulation May Create a Nationwide Manufacturing Boom

With an expected increase in the cost of fuels used by ocean carriers, many manufacturing plants might move from Asia to the United States.

Manufacturing is once again a growing U.S. industry, especially in Southern “right-to-work” states, which tend to have lower wages than unionized states, and Midwestern cities with an abundance of highly skilled factory labor, according to Jack Fraker, vice chairman and managing director of global Industrial and logistics group with real estate services firm CBRE. In addition, there is a build-up in the high-tech manufacturing sector in Silicon Valley, with 1,500 manufacturing facilities with 65,000 jobs alone in San Jose, reports a local ABC News affiliate.

Due to this ramp-up in demand for industrial space in secondary markets, some smaller markets, like the Spartanburg-Greenville area in South Carolina, are performing more like primary, core markets, Fraker says. Growth in manufacturing in these towns is adding pressure on industrial vacancy and rent, and spurring new industrial development around plants and ports.

In addition, 25 automotive vendors and parts and materials suppliers, including DAA Draexlmaier Automotive of America, LLC, Grupo Antolin and Lear Corp., as well as 25 indirectly related companies, have set up manufacturing facilities or warehouses in a campus-like configuration near the BMW plant, Fraker says.

As a result, this industrial market is “finding a higher gear,” according to a fourth quarter 2018 CBRE market report, with record-speed construction of large-scale industrial facilities to accommodate both the market’s manufacturing base and diversification towards a distribution hub with the establishment of an inland port.

While industrial inventory in the Spartanburg-Greenville market totals 170 million sq. ft., speculative development is growing, with 6 million sq. ft. expected for delivery in 2019 and another 4 million sq. ft. next year. But developers aren’t the only ones investing in this market, it is also attracting investors priced out of prime markets, the report states.

Noting that mostly manufacturing of smaller consumer products was off-shored, while production of high-value, capital equipment has remained in the U.S, Walter Kemmsies, managing director, economist and chief strategist for the U.S. ports, airports and global infrastructure group of JLL, says that manufacturing growth is having a major impact on industrial space. But this trend is mostly happening in smaller, secondary and tertiary Midwestern and Southern markets with a connection to transportation hubs and non-union wages. This is where foreign auto manufacturers are locating.

Meanwhile, U.S. auto manufacturers have remained in unionized Rustbelt markets in Michigan and Ohio, which boast large, skilled labor pools and cheap electricity. The U.S. auto industry, however, is shifting to high-tech auto production and is focused on producing electric and autonomous vehicles.

Detroit, the headquarters city for Ford, GM and Fiat Chrysler, with 90,000 engineers, sreves as the leader in automotive and advanced mobility innovation, as well as at the forefront of industrial evolution with advanced manufacturing facilities that employ 350,000 workers and generate $60 billion in annual revenue, according to the Detroit Economic Growth Corp.

Kemmsies notes that the U.S. auto industry has shifted toward advanced manufacturing practices that employ automation and robots and is focused on producing electric and autonomous vehicles, which involve about 1,500 moving parts, rather than 15,000 used in traditional vehicles. Therefore, fewer U.S. vehicles are likely to be produced in the future, as electric vehicles have an estimated life expectancy of 1 million miles, compared to 200,000 miles for gas-powered vehicles, he says.

Manufacturing of consumer goods, save for household goods, has not increased significantly over the past few years, notes Kemmsies, but he adds that a new maritime regulation may soon create a manufacturing boon. The International Maritime Organization (IMO), which sets rules for seagoing vessels globally, has mandated a reduction in fuel emissions, specifically sulfur content, to reduce the environmental impact of ships. Effective January 1, 2020, ocean vessels will be required to reduce their environmental impact by shifting to a higher quality fuel source. The mandate targets 14 chemicals in fuel used by ships and calls for shifting from IFO 380, which is high in sulfur, to IFO180 to reduce sulfur emissions.IFO 180 currently costs 35 to 40 percent more than IFO 380. With the mandate going into effect, demand for the higher quality fuel will likely drive the cost up two to three times as much, according to Kemmsies.

Ocean carriers cannot bear the burden of the increased cost, given their already tight profit margins, he notes, so the added cost will be passed through to shippers. As a result, it will become less expensive to produce consumer goods currently made in Asia in the U.S. or at near-shore manufacturing facilities in Mexico.