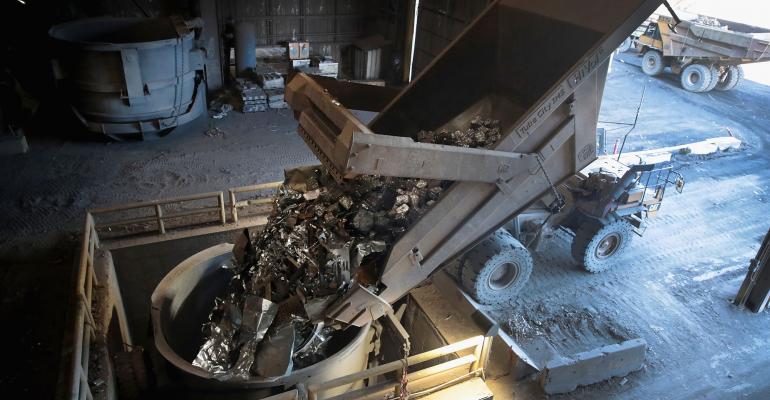 (Bloomberg)—President Donald Trump’s tariffs on foreign steel have sped the decline of some of the U.S. mills he vowed to help.

Exuberance over the levies dramatically boosted U.S. output just as the global economy was cooling, undercutting demand. That dropped prices, creating a stark divide between companies like Nucor Corp., that use cheaper-to-run electric-arc furnaces to recycle scrap into steel products, and those including U.S. Steel Corp., with more costly legacy blast furnaces.

Since Trump announced the tariffs 16 months ago, U.S. Steel has lost almost 70% of its market value, or $5.5 billion, and idled two American furnaces in mid-June that couldn’t be run profitably at the lowest prices since 2016. Meanwhile, Nucor, down around 20%, has touted $2.5 billion in expansion projects.

The president’s actions likely “sped up” up an unavoidable “evolution,” said Nucor Chief Executive Officer John Ferriola in an interview last month. “Are some companies are going to suffer? Absolutely. We’ll we see some capacity go away, I’m sure of it."

Last July, Trump stood on a makeshift stage at a U.S. Steel mill in Granite City, Illinois, and beamed as workers cheered the tariffs. At that point, the company had already restarted one of two blast furnaces at Granite City, and vowed the second would soon be brought online.

“Workers are back on the job, and we’re once again pouring new American steel into the spine of our country,” Trump said during the hour-long program. “U.S. Steel is back.”

Since then, though, there’s been a somewhat different outcome.

With the stronger steelmakers aggressively boosting capacity to grab market share, a dip in demand has left older, more costly blast furnaces at U.S. Steel and AK Steel Holding Corp. struggling to compete, even with foreign steel nudged out of the equation.

“Be careful what you wish for,” said Timna Tanners, an analyst at Bank of America who has dubbed the industry’s push to add capacity without enough demand “Steelmageddon.” She called it “ironic” that the tariffs are “punishing some steel companies.”

A spokeswoman at U.S. Steel declined to comment while AK Steel said its products have little overlap with EAFs, and that the additional capacity will further pressure imports.

President Trump touted its comeback last July, but much has changed.

As expected, the tariffs reduced steel imports, creating more demand in 2018 and boosting profits. With that cash in hand, added money from Trump’s corporate tax cut and confidence that protectionism is here to stay, domestic producers began adding more capacity than they would have otherwise.

The problem: This year, with the global economy cooling, demand -- and prices -- have fallen. That’s given an added incentive to EAF companies with superior profit margins and balance sheets to aggressively grab a bigger share of the market.

“Not all plants are the same,” said Mark Millett, CEO of Steel Dynamics Inc., who in November announced a new $1.8 billion EAF mill to be built in the U.S. southwest. “Not all projects are the same.”

Suppliers to blast furnaces are sounding the alarm. In laying out his vision for iron-ore miner Cleveland-Cliffs Inc. at a recent conference, CEO Lourenco Goncalves painted a bleak future for what makes up the overwhelming majority of his current customers.

That’s why Cliffs is investing $830 million in a Toledo, Ohio-based plant that will produce hot briquetted iron for electronic-arc furnaces run by firms such as Nucor, Goncalves said. They invested in the plant because “we were able to see the future of steelmaking in the United States,” Goncalves said in New York last month.

Many “blast furnaces will shut down.,” he added.

U.S. Steel is trying to show investors it can move past its legacy blast furnaces. In February, it announced the restart of construction on an EAF facility in Alabama. And in May, the company said it would spend $1 billion upgrading facilities in Pennsylvania to produce more high-strength steel for the automotive industry.

“Less efficient capacity should go away, but there is no guarantee that it permanently goes away,” Bank of America’s Tanners said. “It probably doesn’t go down without a fight.”

--With assistance from Shawn Donnan.

To contact the reporters on this story: Matt Townsend in New York at [email protected];

To contact the editors responsible for this story: Luzi Ann Javier at [email protected]