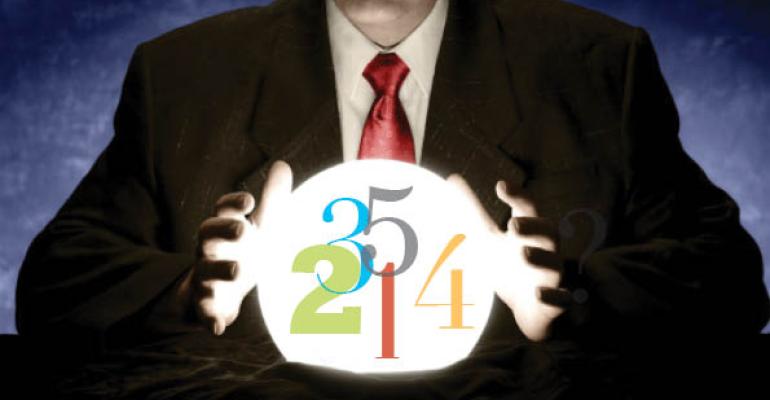 Prediction No. 1: Economic growth will accelerate

Though growth has been anemic for the last four years, it is poised to increase, albeit at a rate still below the long-term trend of 3.1 percent. But looking at the Q3 growth rate of 4.1 percent provides insights into the multiple divers of growth in this country.

U.S. consumers are better-positioned to increase spending. Having paid down (or defaulted on) nearly $1 trillion of household debt, U.S. consumers have aggressively improved their balance sheets. With further help from low interest rates, household debt-service burdens are at their lowest level in more than 30 years, according to Federal Reserve data. Household wealth relative to disposable income has surpassed its historical average, according to the Fed, thanks to a pronounced recovery in financial and housing markets. This has given consumers the confidence to spend more of their disposable income, which is growing in line with job creation.

Technology: The IT sector, including icons like Apple, Google, Facebook, LinkedIn, Twitter, and countless internet startups, is adding jobs at twice the pace of the broader labor market, according to Bureau of Labor Statistics (BLS) data. Unlike the 1990s dot com boom, this is no flash-in-the-pan ephemeral growth spurt, but long-term, and involve, for the most part, profitable companies with global market share. Technology has proved to be a pivotal driver of economic growth.

Energy: Thanks largely to new shale oil and gas discoveries and extraction technologies, the U.S. Energy Information Administration predicts that domestic energy production will grow by more than 20 percent from 2012 to 2035. The United States recently eclipsed Russia as the world’s largest gas producer and, according to the International Energy Agency, will overtake Saudi Arabia to become the world’s largest oil producer in 2015. Not only has the boom created jobs in the oil and gas industry; it has also helped to lower energy costs, contributing to a re-birth of U.S. manufacturing, where employment is rising for the first time in 15 years, according to the BLS.

Agriculture: According to the Department of Agriculture, U.S. real (inflation-adjusted) farm incomes are expected to remain near their highest level since World War II in 2014. The United States is the world’s largest agricultural exporter and has benefited from increasing food consumption in emerging markets. (Government mandates requiring the use of ethanol, which is derived from corn, in gasoline have also played a role.)

Housing: The housing market precipitated the Great Recession but is now helping to drive the recovery. Home prices were up 12.8 percent year-over-year in August and are up 22.7 percent from their March 2012 lows (although they remain about 20 percent below their mid-2006 peak), according to the S&P/Case-Shiller composite index. According to the Census Bureau, housing starts are on track to surpass 1 million units in 2014 for the first time since 2007 after falling to about 500,000 in 2009, the lowest level since records began (in 1959). We believe that homebuilding, spending on home furnishings, and more generally, the favorable effects of rising home prices on consumers’ psyches, will continue to support for the economy.

Another economic factor to watch is the federal government. The drag from U.S. fiscal policy will fade, but not disappear. After running trillion-dollar deficits for four consecutive years, which propelled total debt to 73 percent of GDP (the highest level since the 1940s), the federal government has begun to bring its finances under control. Payroll tax hikes at the beginning of 2013 coupled with “sequester” cuts to discretionary spending will help to bring the deficit down to 3 percent of GDP in 2014 from 10.1 percent in 2009, stabilizing the debt at 74 percent of GDP.

However, Moody’s Analytics estimates that the federal drag totaled 1.5 percentage points of GDP in 2013, the largest fiscal contraction since post-war decommissioning. This drag will diminish to perhaps 0.5 percentage points in 2014, still material in an economy growing 2 percent-3 percent annually. Despite stronger macro fundamentals and positive micro drivers, tight U.S. fiscal policies will likely cap U.S. economic growth at about 3 percent in 2014, up from 2 percent in 2013. Economic growth should be strong enough to generate 200,000 jobs a month and bring the unemployment rate down to 6 percent by year-end from 7 percent currently.

Prediction No. 2: Interest rates will increase.

We believe that weak inflationary pressures and the continuing high unemployment and underemployment coupled with low levels of labor force participation (in essence labor deflation) will encourage the Federal Reserve to keep monetary policy loose for an extended period. While “tapering” of asset purchases will begin in January, the Federal Reserve’s balance sheet will likely expand through midyear and interest rates will likely remain on hold until 2015. In this environment, 10-year Treasury yields will likely drift higher, but only gradually, from around 3 percent in January toward 4 percent by year-end.

People often ask me why, given the dramatic increase in money supply over the last five years, we have not seen much higher inflation? The answer is that we are will the world’s reserve currency and as the world economy grows, particularly emerging markets, there is more of a demand for dollars on the part of firms, governments and households. In essence, the increase in money supply has been absorbed globally by these three sources of demand. Moreover, since the world has been a scary place (economically speaking) since the recession, more cash in the form of dollars has been held. Will this magic bullet last indefinitely? No, but for the foreseeable future, there is no obvious replacement world currency—Euro or RMB, anyone?

We should continue to see extremely low levels of new supply—2013 essentially tied with 2011 and 2012 as the weakest year for commercial construction since the late-1970s, according to Census Bureau data. And it was the weakest year relative to GDP since records began in 1958—allowed even modest absorption to soak up some of the overhang of unused space. The low-supply environment, with the exceptions of multifamily in some markets and industrial in a very few markets is still the case. The factors that maintain low levels of supply are still in place namely much more stringent underwriting and the fact that many financial institutions have no appetite for new construction. Because of low interest rates, most financial institutions are still quite content to make money of the carry trade—borrow at the FFR of nearly zero and invest in short-term fixed income.

The industrial sector is among the few areas where speculative development has begun to surface, responding to the dearth of modern warehouse space equipped with the latest distribution technology. We are also seeing some development of industrial build-to-suit office facilities (Apple and Amazon are building large campuses in San Jose and Seattle, respectively), and an even smaller number of speculative projects in some of the hottest markets. In general, however, construction pipelines indicate that new supply should remain very modest for a least another year.

Prediction No. 4. Investment in commercial real estate will increase.

Total returns to commercial real estate have been quite strong for three consecutive years now according to the NCREIF Property Index—the magic number for many institutional investors. Those who may have felt as if they have missed the party may now conclude that it is safe to go back into the water. The secret is certainly out, based on the analyst recommendations s in favor of commercial real estate I have regularly seen in both the mainstream and financial press. Expect significantly increasing investment flows from institutional and retail investors next year.

Transaction volume topped $300 billion in 2013, up from $70 billion in 2009, although still below the $570 billion high-water mark in 2007, according to Real Capital Analytics. Cap rates were stable during the year even as 10-year Treasury yields increased by more than 100 basis points. From a capital-markets perspective, 2014 should look much like 2013: transaction volume will increase as both equity and debt investors target commercial real estate in search of yield, diversification, and a hedge against inflation and interest-rate risks. It is likely that increased capital flows will neutralize any upward pressure on cap rates from higher interest rates.

Investor interest in commercial real estate should come from several areas. Total commercial real-estate debt outstanding increased in 2013 for the first time since 2008 as banks and CMBS conduits joined insurance companies in expanding their mortgage books. Having shored up their capital ratios, banks are in a strong position to lend, particularly if rising long-term interest rates increase interest margins. Tighter spreads on CMBS are also reviving the securitization market: total issuance doubled to about $90 billion in 2013, according to Commercial Mortgage Alert.

Meanwhile, after a banner year for stocks in 2013 (the S&P 500 jumped 27 percent), U.S. institutions may be underweight commercial real estate, to which they typically target 8 percent to12 percent of their portfolios, and may wish to hedge against the risk of a stock-market correction: A recent Cornell University survey indicated that institutional investors in the Americas were under-allocated to real-estate in 2013 and planned to increase allocations in 2014. Foreigners are drawn to America’s promise of higher risk-adjusted returns: a recent survey from the Aossociation of Foreign Investors in Real Estate tapped the U.S. as providing the most stable and secure investment opportunities, as well as the greatest opportunities for capital appreciation.

Prediction No. 5:The “great rotation” should favor commercial real estate.

Bonds are poised to deliver more negative returns as interest rates rise. Not only will fixed-income see negative appreciation, the income thrown off by most high credit bonds will seem increasingly unattractive in this environment. Bond yields have increased along with the 10-year Treasury, but they are exposed to interest-rate risk (shorter-duration bonds are less exposed, but offer minimal yield).

Commercial real estate’s potential to hedge inflation and interest-rate risks may attract income-oriented investors. At the same time, the equities markets continue their stunning rally, attracting many fixed income investors. Though total returns are up 27 percent for 2013, the average S&P 500 dividend yield sits at a paltry1.9 percent--not even above the rate of inflation. Therefore, I predict that there will be a a great rotation out of fixed-income and into equities, but significantly more into income-oriented investments such as commercial real estate and alternatives. Commercial real estate stands out as an attractive alternative that can provide relatively high yields and some degree of inflation along with interest-rate protection.