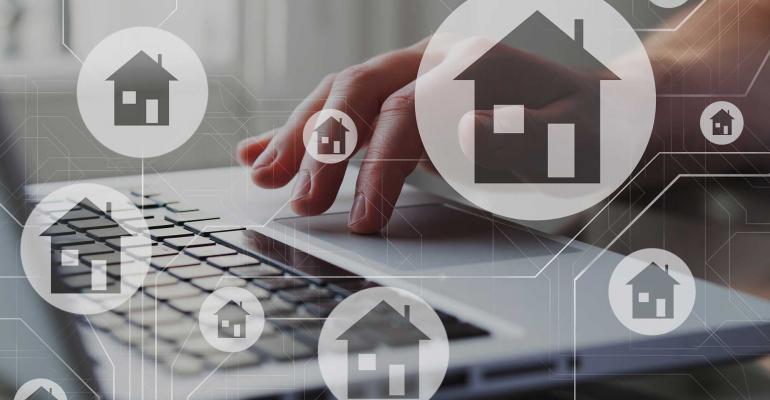 A $13.5 Billion SPAC Sensation Will Buy Your House: Chris Bryant

Opendoor Labs Inc. is planning to go public by merging with a special-purpose acquisition company.

(Bloomberg Opinion)—One year ago WeWork called off plans to go public after investors recoiled at the office-space provider’s huge consumption of cash and peculiar accounting. Now, another real-estate company that’s also backed by the SoftBank Vision Fund, Opendoor Labs Inc., is poised to list its shares.

Like WeWork, Opendoor is capital intensive, loss-making and has a nosebleed valuation. It also has a fondness for non-standard earnings metrics. Unlike WeWork, Opendoor isn’t planning a regular initial public offering. It’s going public by merging with a special-purpose acquisition company, or SPAC.

Opendoor buys houses, refurbishes them and sells them a few months later. Essentially, it flips homes. The company rejects that description, however, and would prefer you called it an “iBuyer” — a technology-enabled, one-stop shop for homeowners who want to sell quickly with as little friction as possible. You enter your home address on the website, and some details about the state of the property and its features, and it makes you an offer.

In fairness, Opendoor makes most of its money from charging the seller a 6%-9% levy on the gross purchase price — not from buying low and selling high. (In the U.S. someone selling a house the old-fashioned way might pay 5%-6% in broker fees.) It sold almost 19,000 homes last year in 21 U.S. cities, although Phoenix, Dallas, Atlanta and Raleigh account for almost half of its revenue. Rival real-estate websites such as Zillow Group Inc. have also jumped aboard the iBuying bandwagon.

So far, investors have been willing to overlook Opendoor’s $900 million or so of losses since it was founded in 2014. They’ve also accepted that revenue may halve this year because the company paused the buying of properties during the pandemic and laid off a third of its staff. While it has restarted home purchases, revenue isn’t expected to recover until 2022. That’s an odd look for a high-growth company.

When the Vision Fund last invested in 2019, it valued Opendoor at just $3.8 billion. This year, Social Capital Hedosophia Holdings Corp II, a SPAC created by former Facebook Inc. executive Chamath Palihapitiya, decided it was worth $4.8 billion (excluding its cash). Since announcing the merger with Opendoor in September, the price of shares in Palihapitiya’s SPAC has more than doubled. This means Opendoor’s enterprise value has risen to about $13.5 billion, even before the transaction is complete.

Palihapitiya and his investment partner Ian Osborne have put more of their own money — about $169 million — into Opendoor than is customary in a SPAC deal. At the current share price, they’re set to achieve a spectacular four-times return on that invested capital.

It’s hard to see how the company’s fundamentals justify such returns. Opendoor said the SPAC transaction valued it at a 1x multiple of its revenue (the value of the houses it sells, plus any ancillary services). But once you deduct the cost of acquiring and renovating the houses, the company generated just $300 million in gross profit last year — a paltry 6% gross margin.

Even that’s a rosy way of looking at the numbers. Subtract financing costs, holding expenses (such as utility bills and property taxes) and selling costs (the buyer’s broker fees and transaction taxes) and Opendoor made just $27 million in “contribution profit” last year, or 0.6% of revenue.

The returns should improve as the expanding company builds economies in purchasing (it fitted more than a million square yards of carpet last year) and cross-sells more services like title insurance, escrow and mortgage finance. Opendoor thinks it can generate $458 million in “contribution profit” by 2023, or 4.7% of revenue. That’s still a pretty thin margin.

And that “contribution profit” calculation includes only costs related directly to selling houses; it excludes groupwide marketing and tech development costs. Once you deduct those, Opendoor will probably lose money for several more years.

One worry about Opendoor is that it will be stuck holding depreciating real estate if the housing market cools. Its ability to quickly sell most of its inventory during the pandemic without fire sale is reassuring, however. WeWork signed up to multi-year leases on buildings but then allowed its customers to cancel their memberships easily — an unfortunate mismatch — whereas Opendoor typically holds properties for just 100 days.

Providing the SPAC shareholders vote in favor of the merger in the coming weeks, Opendoor’s stock market debut is pretty much a done deal. Sustaining that extraordinary valuation may be more challenging.

To contact the author of this story: Chris Bryant at [email protected].