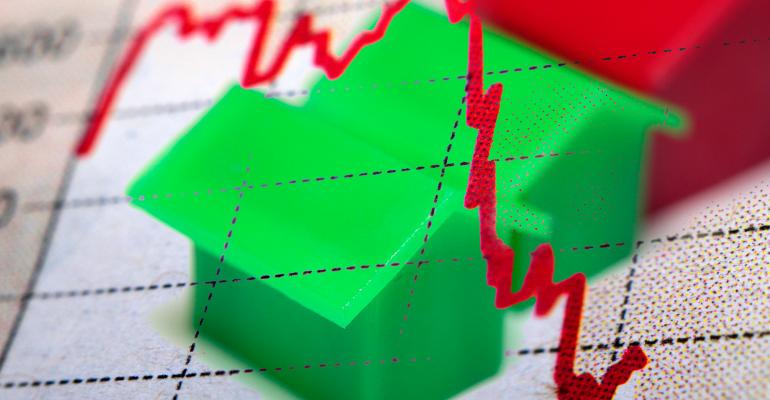 Fund mangers could lose $2 billion on credit-risk-transfer securities, which shift the risk of borrower defaults from the GSEs to private investors.

(Bloomberg)—Hedge funds and mutual funds are among bond holders that could lose $2 billion as a consequence of U.S. lawmakers letting millions of homeowners delay their mortgage payments during the coronavirus pandemic.

At stake are so-called credit-risk-transfer securities whose owners include fixed-income funds run by Franklin Resources and AllianceBernstein Holding LP. The securities, which threaten to lead to estimated losses of between $1 billion and $2 billion, are intended to shift the risk of borrower defaults on Fannie Mae and Freddie Mac mortgages to private investors.

The issue is an unintended side effect of the response to the global health crisis. As the U.S. economy shut down in March, Congress rushed to pass the $2 trillion CARES Act, which included a provision that allowed forbearance on loans backed by Fannie and Freddie for as long as one year if borrowers were impacted by the pandemic.

The postponed mortgage payments will hurt investors in certain credit-transfer securities even if homeowners resume payments and Fannie and Freddie never suffer losses, a predicament that’s prompted bond holders to lobby lawmakers and federal officials for a fix. The situation has also soured some investors on CRT securities, a $50 billion market that was created in part to protect taxpayers from ever again having to bail out Fannie and Freddie.

“This is not supposed to be a transaction where Fannie and Freddie walk away with a windfall and do not have losses,” said Michael Canter, director of securitized assets and U.S. multisector fixed income at AllianceBernstein. “Such a result would be contrary to the spirit of the economic arrangement.”

A main target of investors’ pleas for relief has been the Federal Housing Finance Agency, which regulates Fannie and Freddie. The bond holders, their lawyers and trade groups have asked the companies, the FHFA and Congress to make changes that will spare them from losses.

So far, the investors say they haven’t gotten a response from FHFA Director Mark Calabria. An FHFA spokesman said that the agency is studying the issue.

Not everyone is sympathetic to bond holders. If they face losses that are ultimately absorbed by Fannie and Freddie, it would undermine the purpose of issuing CRT securities in the first place, said Douglas Holtz-Eakin, president of the American Action Forum, a right-leaning think tank that advocates on economic and fiscal policy.

“It was a valid contract, and they should adhere to it,” Holtz-Eakin said. “A lot of investors were hurt in a lot of ways by the CARES Act. There’s nothing special about these guys.”

Fannie and Freddie buy mortgages from lenders, wrap them into bonds and guarantee the repayment of principal and interest to investors. As the housing market collapsed in 2008, taxpayers rescued the companies and the government took them over. In the ensuing years, U.S. officials and Fannie and Freddie executives began proposing new ways to reduce the companies’ massive mortgage-credit risk. At present, they backstop roughly $5 trillion of home loans.

CRT securities are one of the innovations that policy makers came up with. Each bond is tied to an underlying pool of mortgages, with investors receiving interest payments. If borrowers default, bond holders lose their principal, which Fannie and Freddie use to cover the bad loans.

A Growing Market for Mortgage-Credit Risk

Fannie and Freddie can conceivably profit on some of the earliest-issued CRT bonds if homeowners stop making their loan payments for six months -- a scenario that under those bonds’ provisions counts as a default -- before restarting payments later on. The earliest CRT securities also lacked an important safeguard included in more recently issued bonds that protects investors if natural disasters cause defaults.

That combination of factors has created a toxic brew for investors during the pandemic, which Fannie and Freddie confirmed counted as a natural disaster. Credit-rating companies have warned that some bonds could generate losses because of the mortgage-payment reprieve provided by Congress. If borrowers don’t leave forbearance by the six-month mark, which for many borrowers will be in September, “it really is going to be a problem for those bonds,” said Fitch Ratings analyst Suzanne Mistretta.

Paul Varunok, a portfolio manager in Franklin Templeton’s fixed-income group, said that would go against the understanding that investors had when they bought the bonds, which were issued in 2013 and 2014.

“Without a change in language, it is indeed possible that investors take losses while the GSEs could potentially profit,” he said. “We do not believe this was in the spirit in which the program was incepted.”

Already, some bond holders are threatening to stop buying CRT securities if they get stuck with losses, according to investors who requested anonymity to discuss private conversations with government officials. The investors also say they have a legal argument because Fannie and Freddie set the forbearance policy that would trigger losses, in effect setting a house on fire to collect on an insurance policy.

The Structured Finance Association, a trade group that represents some investors, sent FHFA’s Calabria a letter in May arguing that such a stance would contradict the marketing materials that Fannie and Freddie issued when they sold the bonds. Last month, six House Republicans, led by Missouri’s Ann Wagner, wrote to Calabria to urge him to help out investors “before further harm is done to the CRT market.”

The request might not resonate with Calabria. In May, he proposed new capital standards for Fannie and Freddie that some experts said might prompt the companies to cease issuing CRT bonds.

To contact the reporter on this story: Joe Light in Washington at [email protected].