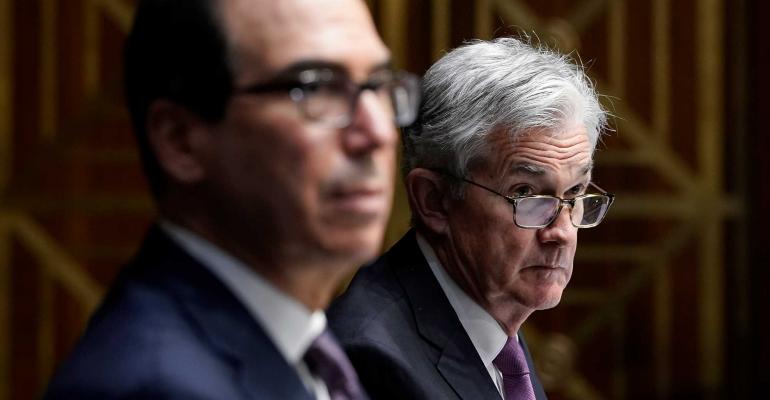 The Fed Still Has a Powder Keg at Its Disposal: Brian Chappatta

Suppose that instead of viewing bond purchases in the context of financial markets, central bankers instead linked them more closely to fiscal policy initiatives.

In many ways, Powell and his colleagues have actually been relatively restrained in their messaging. They could be much more forceful — the only question is whether they want to open that potential Pandora’s box.

Since June, the Fed has explicitly been buying $80 billion of U.S. Treasuries each month. That was initially under the guise of ensuring smooth “market functioning,” but minutes of the central bank’s September meeting revealed that officials now see purchases as “contributing to accommodative financial conditions in a way that supported economic recovery.” This is the central bank’s way of saying the stock market is up, credit spreads on investment-grade corporate bonds are tight and risky companies can easily find willing lenders. In other words, the Fed is supporting asset prices, which indeed helps keep a recovery on track but also disproportionately benefits the wealthiest Americans who own the vast majority of stocks and bonds.

Suppose that instead of viewing these bond purchases in the context of financial markets, central bankers instead linked them more closely to fiscal policy initiatives. It cost about $300 billion to send $1,200 stimulus checks to Americans across the country earlier this year. That’s less than four months of Treasury purchases at the current pace. House Speaker Nancy Pelosi was asking for $436 billion in federal aid for states and cities. That’s about five months. Both of those are examples of the kind of spending that the Fed can’t do itself and which reaches Main Street much faster than the wealth effect of higher asset prices.

Whether it was in response to the “fiscal Fed” moniker or not, Boston Fed President Eric Rosengren and Dallas Fed President Robert Kaplan on Thursday yet again criticized the failure of Congress to pass another round of aid and defended the central bank’s push for a deal on Capitol Hill. “It’s not that we have no tools,” Rosengren said. “But the fiscal policy tools are much more effective.” Kaplan added separately: “I think the Fed can do more, and I’m sure we’ll look at all our options, but those aren’t substitutes for fiscal policy.”

Powell and the rest of the central bank leadership could do a better job explaining to Congress — and the American public — what exactly the Fed is capable of doing. Namely, there’s nothing stopping it from ramping up Treasury purchases to offset additional federal spending on unemployment benefits or grants to state and local governments. They could lean into the “fiscal Fed” label to help get the U.S. through the coronavirus crisis.

Powell has gradually started to veer in that direction. “The recovery will be stronger and move faster if monetary policy and fiscal policy continue to work side by side,” he said last week. The editorial blasted that phrasing, claiming it “sounds as if he sees the Fed as a political partner of Congress and the U.S. Treasury” and suggests “he can read the polls as well as anyone, and he can see a Biden Presidency coming.”

In reality, the idea of a more synergistic monetary and fiscal policy has been talked about in central banking circles for years. Simply cutting interest rates to zero — or even negative — didn’t work on its own after the global financial crisis. All it did was funnel the largest gains to wealthy asset holders, who have a smaller propensity to spend each extra dollar they receive, while wages stagnated for lower- and middle-class Americans, who would be more inclined to spend. It’s not exactly a recipe for a healthy economy.

The Fed might be hesitant to fully endorse teaming up with Congress because it gives away the game. Buying U.S. Treasuries that were issued to cover spending on fiscal aid would put the central bank more squarely in the realm of  “monetary financing” and Modern Monetary Theory than its current path of employing “quantitative easing” to help foster “accommodative financial conditions.” But if the Fed truly wanted to hammer home the importance of fiscal aid, it could start to more directly allude to this sort of coordinated economic strategy.

Ray Dalio, founder of Bridgewater Associates, saw a move toward MMT as “inevitable” in May 2019. This passage perfectly encapsulates the Fed’s current struggle:

The most important engineering puzzle policy makers around the world have to solve for the years ahead is how to get the economic machine to produce economic well-being for most people when monetary policy does not work. I don’t mean that monetary policy won’t work at all; I mean that it won’t work hardly at all in stimulating economic prosperity in the ways that we are used to having it stimulate economic activity, which are through interest rate cuts (what I call Monetary Policy 1) and through quantitative easing (what I call Monetary Policy 2). That is because it won’t be effective in producing money and credit growth (i.e., spending power) and it won’t be effective in getting it in the hands of most people to increase their productivity and prosperity. Hence I believe we will have to go to Monetary Policy 3, which is fiscal and monetary policy coordination that is of a form that we haven’t seen before in our lifetimes but has existed in various forms in others’ lifetimes or faraway places. It is inevitable that this shift will happen because it is inevitable that central bankers will want to ease when interest rates are pinned at 0% and when quantitative easing will be ineffective in achieving the goal.

Now compare that with what Rosengren told Bloomberg News about the limits of buying more Treasuries to boost the economy: “That’s not to say that directionally it doesn’t help, it just says the magnitude of the impact, when rates are already so low, is probably much less than what we want, which is why I think you’re hearing Federal Reserve speakers call out for more fiscal policy,” he said. The sentiment is virtually identical.

Here’s one hypothetical example. Last week, I wrote that the Fed should extend the deadline on its Municipal Liquidity Facility and lower interest rates to provide cheaper financing for state and local governments. But what if, instead, the central bank simply promised to buy the $436 billion of Treasuries needed to fund the Democrats’ proposal to extend federal money to governors and mayors? It’s hardly an unprecedented sum: Recall that the central bank’s balance sheet grew by $586 billion and $557 billion in the weeks through March 25 and April 1, respectively.

The risk, of course, is that such obvious coordination would call into question the value of fiat currency. Lacy Hunt at Hoisington Investment Management, who has been a bond bull for more than three decades, told me in August that the one significant risk he sees on the horizon is that the Fed directly funds government expenditures. “If that happens, then the inflation rate would take off. However, in very short order, everyone would be totally miserable because no one would want to hold money,” he said.

Proponents of MMT, for their part, are up front about inflation as the chief binding constraint on government spending. Meanwhile, given the Fed adjusted its entire monetary policy framework to encourage price growth in excess of its 2% target to make up for years of falling short, it stands to reason that the central bank wouldn’t mind a jolt to inflation expectations (within reason).

It’s not clear what it would take for Fed officials to publicly pledge to keep interest rates low and increase their bond buying in direct response to fiscal support. They seem content to cheerlead for a compromise in Washington amid a frenzy of headlines from Pelosi, Senate Majority Leader Mitch McConnell, Treasury Secretary Steven Mnuchin and others.

For that reason, calling it “the fiscal Fed” feels like hyperbole — at least for now. It’s quite possible we haven’t seen anything yet.