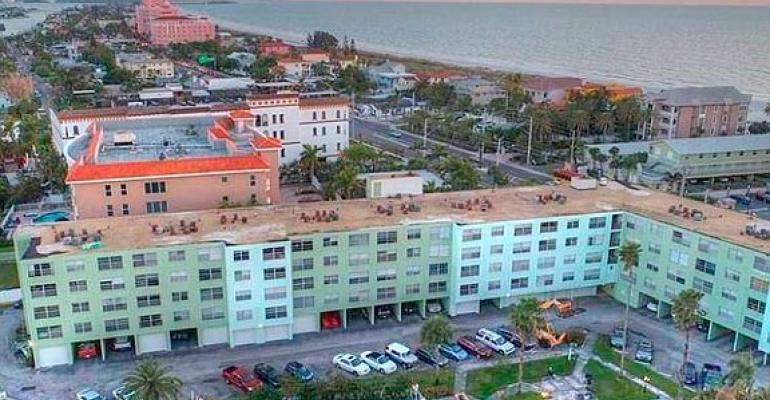 Appetite from all quarters for commercial real estate remains robust as 2020 kicks into gear.

The $14.5-million sale of the Sand Cove Apartments in St. Pete Beach, Fla. last month isn’t a deal that would normally stand out amid the crowded field of mega-sales and portfolio acquisitions that occurred in 2019. What is eye-catching is that the sale price on the 72-unit property surpassed $200,000 per unit—the highest price paid for a 1970s vintage property in that market since 2006, according to Marcus & Millichap.

Properties such as Sand Cove that are achieving record-high prices at the local, or even national level, remain a common theme in the investment sales market. Solid occupancies and rent growth, positive economic and job growth and a further drop in interest rates are all contributing to robust buyer demand and price appreciation. “Across the board, what we’re seeing is that the pricing environment continues to be strong at the national level and across property sectors as a whole,” says Lauro Ferroni, head of capital markets research at JLL.

According to Real Capital Analytics, commercial property prices jumped 8.7 percent year-over-year in November in the four core property types, which is the biggest move since early 2018. GreenStreet Advisors CPPI data for November shows a more modest increase of 2.5 percent.

Although prices are generally stable or rising across the board, pricing trends are very market and sector specific. According to RCA, industrial and apartments saw the biggest year-over-year increases at 13.6 percent and 9.3 percent respectively, while CBD and suburban office reported gains of between 5.0 and 5.5 percent and retail trailed at 3.4 percent. GreenStreet data also shows some big jumps in a few sectors. Notably, sale prices for manufactured homes surged by 16 percent in November, while industrial prices rose by 13 percent and apartments increased 6 percent.

Investors are focusing on cities that are experiencing strong tailwinds from economic and population growth, which bodes well for greater price appreciation in those growth markets. Demographic trends also seem to be playing a bigger role in influencing prices. “Investors are really looking at the clustering of innovation and talent in the market, which is putting certain markets like Nashville, Austin, Charlotte and Raleigh on investors’ radar,” says Ferroni. In some cases, prices in those markets are growing very notably, he adds.

Industrial and multifamily are clearly the two standouts among the core property types. “What’s underpinning those sectors is not just economic trends, but also secular shifts in demand,” says Ferroni. Industrial pricing is being driven by e-commerce and the demand for warehouse space close to urban centers, while the delayed move from millennials to start families and buy homes is fueling sustained demand for apartments. In particular, pricing growth in the multifamily sector has been occurring in value-add deals where investors have been able to initiate a capital improvement plan, raise rents and sell assets at significantly higher values.

There is so much investor capital chasing industrial these days and not enough product as no one wants to sell it, adds Gerry Trainor, CFA, executive managing director at Transwestern in Washington, D.C. “Investors view industrial as a long-term value proposition. So, we have seen prices run up over the last three or four years, and I don’t see that slowing down any, because the demand far exceeds the supply,” he says.

Multifamily is a little more balanced than industrial, but investor demand for multifamily is still outweighing supply. As a result, there continues to be a rise in the multifamily pricing, notes Trainor. “Obviously what’s helping pricing in all of the sectors is the lower interest rates over the last three months,” he says. On the multifamily side, for example, an investor that may have needed a 5 percent cap to get positive leverage can now achieve positive leverage with a cap rate of about 4.25 percent. So, that also has played a role in continued price appreciation, adds Trainor.

It is a more difficult to make an overarching statement for the office sector. Investors have been a little more cautious in buying office assets due to the high cap-ex requirements to add amenities, improve common areas and build-out spaces that will attract tenants. However, pricing on CBD and suburban office generally remain stable with modest increases in some cases.

In addition, it remains to be seen what kind of impact WeWork might have on office properties that have the company as a major tenant. “It will effect new absorption of space but might not have as much of an impact on existing occupied space as you would think,” says Joe Iacono, CEO and Managing Partner at Crescit Capital Strategies, a full-service asset management firm that specializes in commercial real estate debt origination and investment. Many companies have leased a significant amount of flexible space through WeWork. The landlord may change, but those people will still need to be housed somewhere, he adds.

More runway on price appreciation ahead

Looking ahead to 2020, the tremendous amount of liquidity in the market along with low interest rates are expected to continue to support strong pricing. “If rates continue to stay low, I would anticipate that we will see stable but more moderate price appreciation in the coming year,” says Iacono. Investors are still searching for yield. However, property income versus expected appreciation will likely become more of a key driver of  pricing and investment decisions in 2020, he adds.

“When it comes to how pricing will ultimately shake out, where investors will be very focused in the year ahead is on the capital needs of the asset,” says Ferroni. “That will impact the pricing of some assets, especially some of the older office assets and suburban full-service hotels that have not gone through a renovation in this cycle and have greater capital needs.” Industrial and multifamily will likely continue to lead in price appreciation due to the strong fundamentals and investor demand for assets in those sectors.

“People have been saying that we are at the end of the cycle, and I just don’t see that. The economy is doing very well, especially in the Washington D.C. area and there is a tremendous amount of capital with allocations to commercial real estate that are continuing to increase,” says Trainor. “So, I think we have more running room than some people believe.”