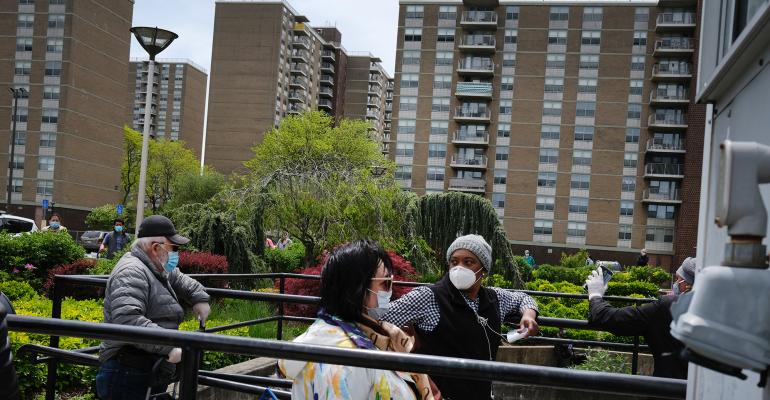 Despite taking some hits, experts expect the market for low-income housing tax credits and affordable housing properties to hold up in the face of COVID-19.

Despite voracious renter demand for affordable and workforce housing, investors in that sector have not been immune from fallout from the COVID-19 economic crisis. Some have hit the pause button as they reevaluate strategies and market risk. However, data that shows that rent collections have not dropped as much as some had feared is giving investors greater confidence in buying both Low Income Housing Tax Credits (LIHTCs) and LIHTC-backed assets.

The LIHTC market was in a very strong position at the start of 2020, and despite a slight pause and dip in pricing, many in the industry are optimistic that the sector is on course to regain some of its pre-COVID momentum. “As you would expect, the demand for affordable housing is incredibly strong. It was strong when we were at full employment in the economy, and you could say it is even stronger now,” says Beth Mullen, CPA, partner and affordable housing industry leader at CohnReznick, an accounting, tax and business advisory firm.

Last year marked a record high amount of equity raised from tax credit investors. According to a CohnReznick survey as reported in its March 2020 Tax Credit Monitor, approximately $18.3 billion of investor equity was closed in housing tax credit funds/investments in 2019. That volume reflects a 10.5 percent increase of $1.7 billion over the 2018 volume. CohnReznick notes four key reasons for the increase in volume that include:

However, some investors have tapped the breaks on buying tax credits over the past three months in the wake of the COVID-19 economic crisis. “We have certainly seen investor demand that has fallen off a bit. That being said, deals are still getting done,” says Tom Pereira, director of structured finance at Boston Capital. Boston Capital is a tax credit syndicator. “Overall, our investors are assessing impacts to their own portfolios right now, as well as their total tax appetite.”

Boston Capital is a tax credit syndicator that raises equity through two different platforms, its multi-investor platform and a proprietary investment platform, essentially one investor for each fund. Last year, Boston Capital had a record year, placing $813 million in equity from both platforms and hopes to reach close to that amount in 2020. The firm closed on an $84 million regional fund based in California in April and has launched a $100 million national fund that is fully specified with properties. Currently, the fund is about 75 percent committed with investors and will likely close in September.

It may be a little too soon to tell how tax credit pricing has been affected due to COVID and the economic crisis, notes Mullen. Those tax credit deals that have closed are from deals that were in the work with investors signed up earlier in the year. “There really isn’t any re-trading or backing away from deals, which is very different than what happened in the 2016 to 2017 time frame,” she says.

Pre-COVID-19, tax credit pricing had been relatively stable for about 18 months. According to CohnReznick, the median national price for tax credits in 2019 was $0.92, and the firm’s latest survey as reported in its May 2020 Monitor is still showing prices that are averaging $0.915 for deals completed in March and April. However, some industry participants are seeing a slight drop in tax credit prices of three cents to four cents for both 4 percent tax credit and 9 percent tax credit deals.

Right now, investor activity is a bit of a mixed bag. Some investors are actively bidding on deals. There also are a number of investors sitting on the sidelines and waiting to see how everything pans out in terms of the downturn, impact on ability for properties to collect rent, investment portfolios and tax credit needs, adds Pereira. So, it is still hard to get a picture of what the true demand is going to be in the second half of the year and how that demand will impact pricing. “We will just have to wait and see how quickly economies reopen and how quickly investors that are on the sidelines come back into the market,” he says.

During times of uncertainty, investors tend to gravitate more towards “plain vanilla” tax credit projects. Those deals that are more outside the box or have some challenges will be tougher to get done, says Pereira. The ideal deal right now for investors is 9 percent new construction deals that have some degree of government subsidy, such as Section 8. The financing structure on affordable housing projects are generally pretty tight because properties don’t generate a lot of cash flow. “Rent collections is what everybody is focusing on right now. So, the subsidy certainly alleviates a big part of that concern,” he says.

Industry participants are hoping that the LIHTC market will regain its pre-COVID momentum. In addition to the record levels of equity being raised from tax credit buyers, the secondary investment sales market for mature LIHTC-funded affordable housing projects was booming with sales achieving record pricing in some high demand markets.

“We did a lot of deals on the West Coast last year where we set price per unit and cap rate threshold records on almost every deal we sold,” says Eric Taylor, managing director, Greystone Real Estate Advisors Inc. “The market was as strong as we had ever seen.” That was evidenced both in pricing, as well as terms such as aggressive deposit structures with non-refundable earnest money that was required very early—even from day one in highly desired offerings, he says. For example, assets in Southern California were generally selling for cap rates below 4 percent.

Greystone Real Estate Advisors provides sale and acquisition brokerage services for multifamily and seniors housing properties, including affordable housing properties that are still within the LIHTC program that have been either developed or rehabbed with the 4 percent or 9 percent credits. On the LIHTC side, those sales involve mature assets that are beyond the state of the active tax credit and are in what is considered to be the extended use period as properties – usually approach year 15 of the initial 30-year period, notes Taylor.

Early price discovery on LIHTC-backed properties is just beginning to emerge following the COVID-19 related pause, and it looks like pricing may not have faltered very much, notes Taylor. In particular, LIHTC assets that also have an underlying component of Section 8 subsidies in place as added security to guarantee rental income haven’t missed a beat. “We have seen an influx of investors seeking assets now with project based Section 8 subsidy as it is viewed as more ‘pandemic proof’ by investors,” he says.

For example, Greystone had some LIHTCS asset offerings in the pipeline in March that included Section 8 subsidies. The sellers opted to keep their original call for offer dates in April as planned. According to Taylor, those offerings generated about half the offerings they had originally anticipated, but the bids that did come in were from highly qualified groups at the same pricing levels expected pre-COVID.

The market is more nuanced on LIHTC assets with no underlying  rent subsidies as both buyers and sellers have waited to see how rent collections would be impacted. Overall, it appears that rent collections are holding up better than expected, at least for April and May rents. Collections have been averaging about 90 percent across the multifamily sector, which is giving sellers confidence in moving forward with offerings. Although the pool of bidders may be smaller, the data on rent collection along with very low financing rates will likely help support good values on those properties that are coming to the sale market.

“It does appear that there is some captive equity on the sidelines anxiously waiting deals to hit the market,” says Taylor. Some investors still have some pretty aggressive investment objectives for 2020, and the few months off do take a bite into achieving those targets, he says. “Thankfully, the affordable housing industry has been somewhat insulated to date from everything that has transpired around us, and hopefully that continues into the future,” he adds.