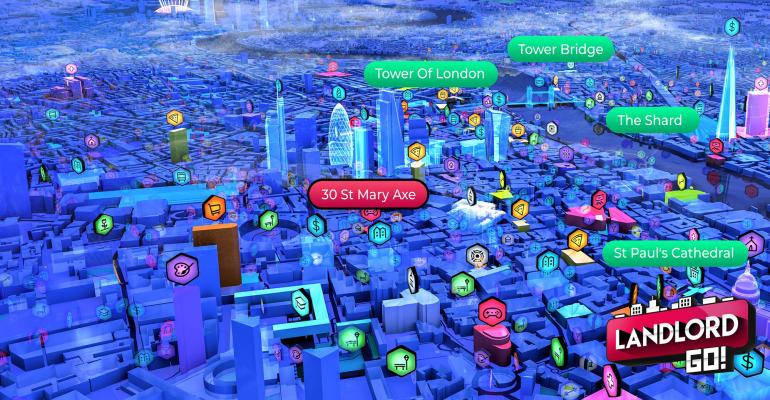 A New AR Game Allows Regular Folks to Play Landlord. We Decided to Test It

Over the years, I’ve interviewed scores of landlords. So I have a decent sense of what it’s like to be a landlord. But having never been an owner of commercial real estate, I don’t fully grasp what it takes to own and manage property.

I thought a new gaming app would give me a clearer understanding of what it means to be a real estate mogul. But, for me, the promise of the app—and of becoming a landlord—crumbled like an aging structure.

At the request of my editors here at NREI, I tested a new augmented reality game called Landlord Go, which one gaming website describes as a cross between the old-fashioned Monopoly and the modern-day Pokémon Go. The game, developed by a British company called Reality Games, allows players to buy, sell and collect rent on some of the world’s most famous buildings and landmarks. I ended up buying (I think) a Chase Bank branch and a Subway sandwich shop, both near my home in Austin, Texas. Hardly famous buildings or landmarks. And I couldn’t figure out how to collect rent on my properties, which is detrimental for a landlord.

Once I downloaded the free Landlord Go app on my iPhone, I created a player name—Austin Mogul—and launched my fledgling career as a future Sam Zell. At the outset, the app’s bearded, suit-wearing guide informed me that a briefcase full of money had been left for me. That’s when I began getting confused. I was unsure how to fetch the briefcase.

Somehow, I landed on a screen that enabled me to purchase coins that could be converted into cash for deals, or so I was led to believe. For $1.99, I acquired 100 coins. Those were added to the 15 coins that I apparently received for free. The 150 coins translated (I think) into $50,000. Or was it euros?

After restarting my iPhone to get rid of the jumble of Landlord Go information on the screen, I was able to start purchasing properties. The GPS-powered app, available for Android and iOS devices, produced a list of properties near me that were available. I was unsure how to go about shopping for trophy properties like the Empire State Building in Manhattan or the Apple campus in Silicon Valley. Nothing in the game felt intuitive to me. I must confess, though, that I’m far from being a gaming wizard.

So, I settled on purchasing a Chase Bank branch near my house that is supposedly valued at $3.178 million. Once the imaginary lawyers completed “paperwork” for the deal, I was able to check my portfolio and collect rent on the property. But, once again, I was befuddled. I couldn’t fathom how to collect rent. Therefore, I dumped the Chase Bank branch.

At that point, I was fed up. After a few minutes exploring my new career as a landlord, I quit. If this is what it’s like being a landlord, I thought, then I’d rather live the rest of my life as a homeowner or renter. I’ll leave the landlord gig to others, aside from owning shares of publicly-traded companies in the real estate sector and owning partial shares of buildings through a crowdfunding platform.

Yet perhaps I should have stuck it out. After all, a news release promoting Landlord Go promises I’d bond with my city “in an exciting and innovative new way that no other game can offer.”

Landlord Go claims to deliver details about more than half a billion actual properties around the world, connecting users to the cities where they live and sending them down the path toward virtual riches.

“Players can start small, buying up local corner shops, and quickly amass a vast real estate empire through savvy investing,” Landlord Go says in the news release. “Put properties on the market, or engage in furious bidding wars with other players, recreating the experience of competing in the thrilling, high-stakes real estate market right from their phone.”

Well, if Landlord Go is representative at all of competing in the high-stakes real estate market, I’d prefer to stake my claim elsewhere.

Still, I wonder whether I should have given it another shot. Could I have truly tested my mettle as an up-and-coming property kingpin? The company behind Landlord Go says that in the game, any time another player visits your property in real life, they pay virtual rent. Imagine the heaps of cash I could amass!

“Each building has a unique daily performance based on real digital footprints. The more visitors your property gets, the higher its value,” according to the news release.

Landlord Go brags that its game “is addictive and exciting.” I found it exasperating and unsatisfying. And that’s too bad. The game sounds cool, relying on a proprietary AI and data platform known as Big Dots to lend a “level of realism” to the landlord realm.

My assessment of the game is likely based more on my technical ineptitude and less on any technical flaws of Landlord Go. The app earns a 4.2-star rating in the Google Play store and a 4.6-star rating in Apple’s App Store, so somebody must love it. And in mid-July, Landlord Go had zoomed to the No. 1 spot in Google Play’s ranking of new and updated games. Previous products from Reality Games include Landlord and Donut Trumpet Tycoon (whose star bears an uncanny resemblance to a guy named Donald Trump).

“There’s nothing quite like it available today and nothing that even comes close to the level of accuracy and detail found in Landlord Go,” according to the company’s new release.

While that may be true, I am perfectly content to drive by or visit the Chase Bank branch and the Subway sandwich shop near my house and not fret about collecting rent. Just wrap up my six-inch turkey sub and let me be on my way. I guess I just don’t have the hunger to be a property magnate—virtual or otherwise. Game over.