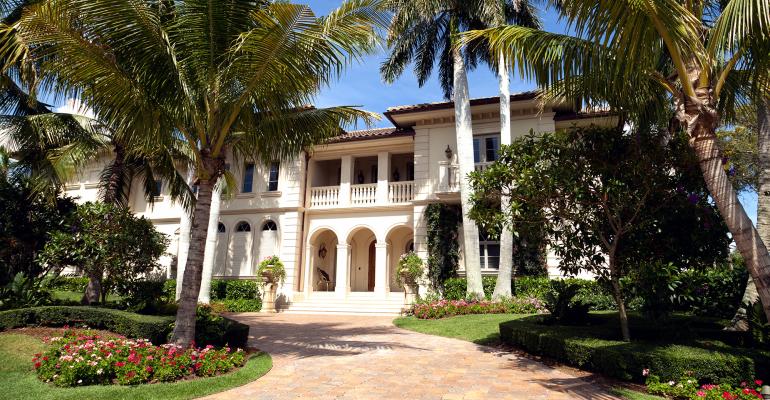 NYC’s Wealthiest Flocking to Florida Even While Covid Rages

(Bloomberg) -- Lavish Florida retreats were a popular escape for rich New Yorkers riding out the Covid-19 lockdown. Now, many are rushing to make things more permanent even while the virus surges in the Sunshine State.

Sellers in places like Miami and Palm Beach are getting flooded with offers, and the supply of available properties is plunging. Florida’s favorable tax laws have long been a draw for high-net-worth individuals, but the pandemic’s disruptions -- to work, school, public safety and northern states’ budgets -- have increased the allure, pushing many of the wealthiest to finally make good on aspirations to relocate.

Purchase contracts in South Florida soared across all price ranges last month compared with a year earlier, when there was no contagion to worry about. At $1 million and above, deals more than doubled in Palm Beach and Broward counties, data from appraiser Miller Samuel Inc. and brokerage Douglas Elliman Real Estate show. In Miami-Dade County, they rose 68%.

That momentum is continuing, even as Florida sets records for Covid deaths. In the first 20 days of July, 162 contracts were signed for Miami-Dade homes priced at $1 million or more, an 88% jump, according to the Miami Association of Realtors.

“Everybody who was on the fence to move for tax reasons now seems to be moving,” said Danny Hertzberg, an agent with the Jills Zeder Group at Coldwell Banker in Miami Beach. “We hear over and over, ‘My tax attorney spoke to me,’ or ‘I spoke to my accountant.’ People are thinking about establishing residency.”

The surging demand helped Hertzberg sell a five-bedroom house in Sunset Islands, west of Miami Beach, within a week, after a previous turn on the market ended in March with no takers. The relisted home -- with a saltwater pool and a dock -- had six showings in a single day, half of them to New Yorkers. The purchase closed July 27, for $7.25 million.

In Palm Beach, where the inventory of luxury homes tumbled 75%, there’s so little to buy that even properties that had languished on the market are finding takers.

Douglas Elliman broker Sonja Stevens was in a hurry to find a new, smaller place for Related Cos. executive Kenneth Himmel and his wife, Janet, after quickly selling their Palm Beach estate for $18.3 million. They decided on a six-bedroom home on nearby Jungle Road that had been listed for 2.5 years, and closed early this month for $10.7 million.

Related, the New York-based developer behind Manhattan’s Hudson Yards, is building an office tower in West Palm Beach on a bet that firms seeking a foothold in Florida would favor modern space. Since the Covid outbreak, lease talks have accelerated with some potential tenants, including private equity firms from New York and Chicago, said Gopal Rajegowda, the Related senior vice president overseeing the project.

Himmel, chief executive officer of the company’s mixed-use division, Related Urban, said the pandemic has inspired well-heeled executives who can work from anywhere to seek out the area’s year-round “resort lifestyle.”

Lloyd Abramowitz’s high-net-worth clients at Cerity Partners are asking more often about the financial wisdom of moving to Florida. They’re concerned about New York City’s rising crime rate, and a higher federal tax burden should a Democrat win the presidency, said Abramowitz, a New York-based partner at the firm.

“And then, add on this: Is it really worth it?” he said. “Do you really have to be in New York anymore to do the work you need to do?”

Residents of posh New York suburbs may have added incentive to relocate: Their large homes that lingered on the market for years are now finding eager buyers, said Laura Beck, chairman of the private clients group at law firm Cummings & Lockwood LLC in Greenwich, Connecticut.

“If there are people knocking on my door offering me money for my house,” Beck said, “maybe now is the time.”

--With assistance from Amanda Gordon.

To contact the reporter on this story:
Oshrat Carmiel in New York at [email protected]

To contact the editors responsible for this story:
Craig Giammona at [email protected]
Christine Maurus